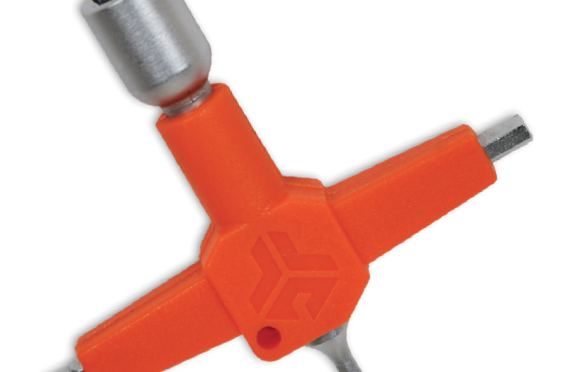 GrooveTech’s new DK Multi is a four-in-one drum key multi-tool designed to combine style with functionality. The centerpiece is a drum key socket optimized for proper fit on the tension rod nut for minimal free play. What separates the DK Multi from other drum keys is the addition of three hex wrenches—2mm, 2.5mm, and 3mm—for adjustment of pedals and other hardware. 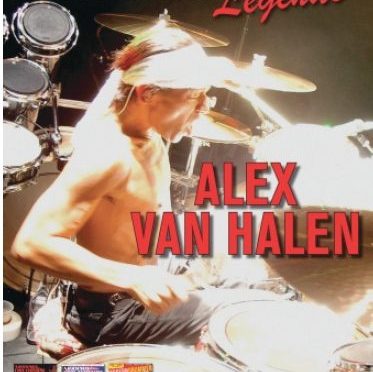 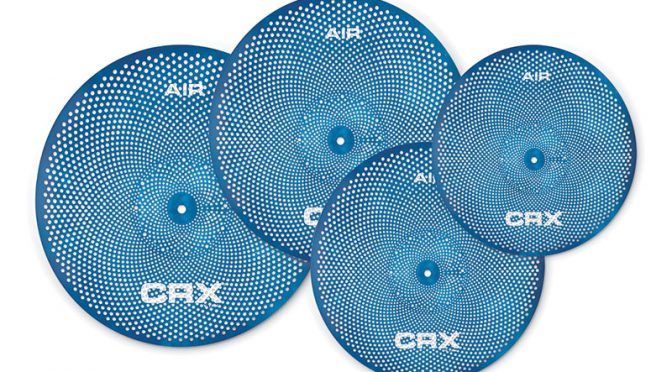 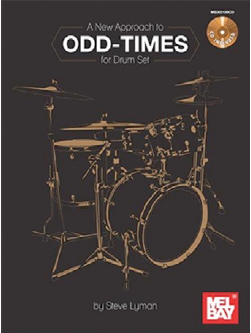 In this book and accompanying audio, drummer Steve Lyman gives an in-depth look at the construction and application of modern time signatures. Breaking down metric units from 5/8 through 17/16, the material provides clear methods of understanding these meters in ways that are fun, creative, and insightful. 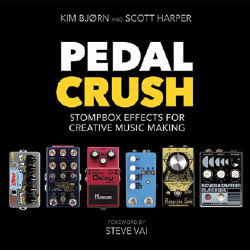 This book is a 376-page trip into the expansive, eclectic, and mesmerizing world of effects pedals. Whether you are a guitarist or another kind of sonic alchemist, this book is sure to delight with its vibrant photos, descriptions, and illustrations. Covering over 800 pedals from dozens of manufacturers and with over 50 exclusive interviews, Pedal Crush also delves into pedal techniques, tips and tricks, pedalboards, software, and more. 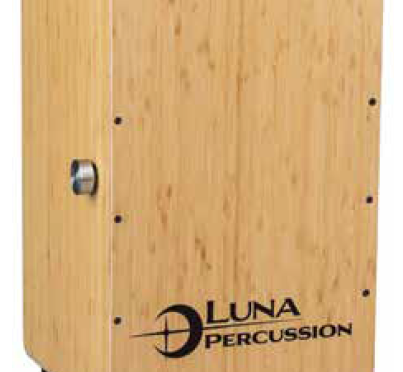 The Luna Bamboo Cajon is made with sustainable bamboo all around with a natural finish. The bamboo produces deep and punchy bass tones, while the built-in snare has a quick switch for on-and-off functionality that allows players to control the snare timbre. Gig-ready, the cajon comes with a soft foam pad for comfortable sitting during extended periods of time. 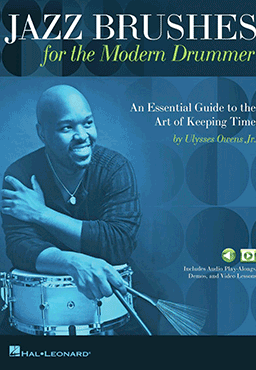 In this book, Grammy Award-winning jazz drummer, composer, educator, and producer Ulysses Owens Jr. explains the history of the development of the brushes in jazz along with exercises and illustrations for better performance. Includes: play-along tracks and demos, instructional videos, bonus interviews, and a comprehensive list of recordings of jazz brush players. 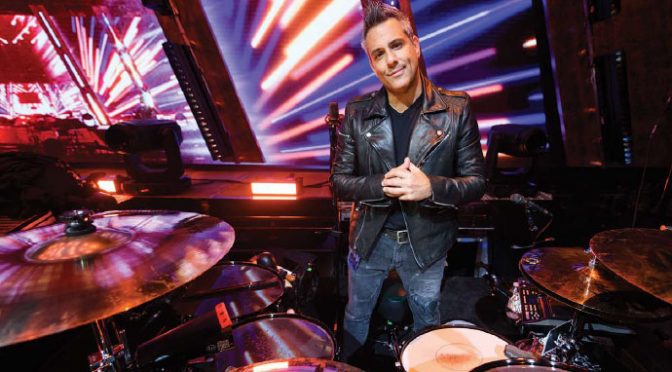 Rich Redmond leaves a piece of his soul behind wherever he goes—whether he is drumming, producing, writing, acting, teaching, or speaking. As he says, “I’m a people person with a lot of heart. I bleed passion.” Drawing on his formal training, experience, and drumming virtuosity, Redmond has parlayed his considerable success—and energy—into a powerful tool to help others jumpstart or reset their careers. His “C.R.A.S.H. Course for Success” (and companion book, with Paul Deepan) is a unique educational program that combines motivational exercises, music, and drumming for musicians and professionals of all stripes.

“I tell students, your attitude is going to be 99.9% of life,” he says. “It’s literally everything because enthusiasm is contagious, and people want to be around musicians that are positive and that can take direction and are team players.”

Redmond of Local 257 (Nashville, TN) speaks from experience. He is now an award-winning recording and touring drummer based in Nashville and Los Angeles who has played with some of the biggest names in the music industry—Jason Aldean, Ludacris, Kelly Clarkson, Bryan Adams, Bob Seger of Local 784 (Pontiac, MI), Joe Perry, and Garth Brooks, to name a few—but he spent years of hard work, dedication, and rejections to get to where he is.

He started playing drums at age six. At age 13, when he heard the The Police’s 1983 album Synchronicity—specifically, the drumming of Stewart Copeland of Local 802 (New York City)—that’s when he knew he wanted to play drums for the rest of his life. In high school he joined every band there was—concert, symphonic, marching, pep—and on nights and weekends had his own garage bands. He was a Texas all-state drummer for two years. In college at Texas Tech University he studied percussion and music education and played in every band he could. He went on to get a master’s degree in music education at the famed University of North Texas, and taught percussion in high school and college.

He became a member of Local 72-147 (Dallas-Fort Worth) in 1993, where local President Ray Hair (now AFM international president) was his “go-to guy.” In 1997, Redmond moved to Nashville to become a session player. “On my first day in Nashville I joined the local union,” he says.

He has spoken often about the benefits of joining the AFM and why he is a member, he says, because he wants musicians to know a professional organization is out there to help them. He loves the community aspect of the Federation, that musicians mix and mingle together, that the union creates a paper trail for its members’ contracts and payments and “always has your back and continues to get you paid,” he says.

One aspect of union membership that Redmond considers “priceless” is the affiliation with the insurance company that provides musical instrument insurance. “That’s a great reason right there to be in the union, that insurance plan,” he says. “It covers you 24 hours a day, 365 days a year, anywhere in the world from everything but locust attacks and nuclear war.” He says most insurance companies won’t cover instruments but, for someone like him, where his equipment is his livelihood, insurance is a must-have. “So, the union is like solidarity. It’s a fraternity. It’s a community of like-minded individuals. There’s the protection; there is a team mentality of someone watching your back and going after your money. The professional support is great.”

For the past 20 years, Redmond has been Jason Aldean’s recording and touring drummer. He is a three-time Modern Drummer Readers Poll winner in the Country Drummer category, a 2010 winner in the clinician category, and in 2011 he was named Best Country Drummer by Drum! magazine. He has played on 26 No. 1 hit songs, as well as co-produced and written three no. 1 hit radio songs.

When he’s not in the studio or on tour, Redmond is writing songs, producing records, authoring books, and acting. One of his great passions is motivating others with his “C.R.A.S.H. Course For Success: 5 Ways To Supercharge Your Personal and Professional Life”—a motivational speech program that he has been giving for the past decade, and about which he published a book by the same name earlier this year.

“The message is basically built on an acronym, which stands for Commitment, Relationships, Attitude, Skill, And Hunger. These are five things that anyone from any walk of life can use to cultivate more success, more enjoyment in both their personal and professional life,” Redmond says. As he writes in his book, “In my experience, people who show unshakeable Commitment to their dreams, to their craft, and their Relationships while maintaining a positive Attitude and rejecting complacency are the ones who tend to be ‘lucky’ enough to be in the right place at the right time. … The CRASH! formula gives you a method for working hard, executing your plans effectively, and transforming your life.”

Redmond uses his drums during his motivational speeches in a talk-play-talk-play format, which resonates with people young and old, he says. Whether he is talking to Fortune 500 company executives, pharmaceutical reps, real estate agents, or high school and college students, Redmond’s message is the same. He urges his listeners to have a laser focus and a vision for their future, a lot of determination and solid follow-through. “Hard work will trump raw talent every time, but if you have both of those things, you really can be unstoppable. It’s a universal message, and a customizable message,” he says. “And I wrap it all up by saying you have to stay hungry for success. Whether you’re a first-year musician or, like me, I’ve been playing the drums for 43 years. I’m only going to stay relevant by staying hungry for success in realizing that passion is my engine and hard work is the fuel. So, if I’m passionate about music, it doesn’t feel like I’m working hard and the harder I work, the luckier I get, which becomes a cycle of self-empowerment.”

To learn more about Rich Redmond and his course, visit his websites at richredmond.com and crashcourseforsuccess.com. 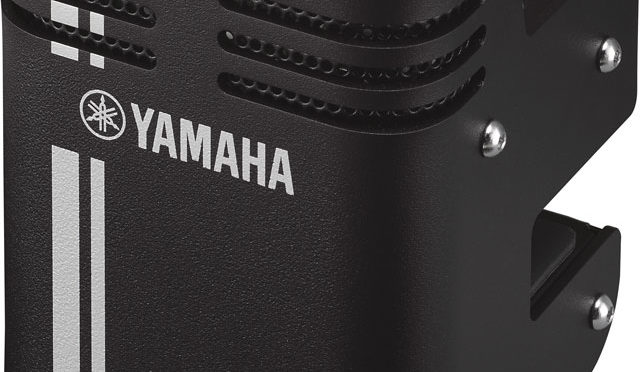 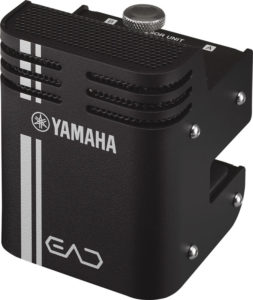 Yamaha EAD10 stand-alone drum module system lets drummers easily capture sounds on an acoustic kit with a single microphone/trigger component attached to a digital processor. The easy-to-mount system also allows you to add effects, providing endless creative potential with nearly 800 stored sounds and effects, an onboard sampler and 50 present combinations, with the ability to program 200 more. Live bands performing in small venues can connect the central module to a mixer and use EDA10 as a reference for the PA system to integrate the sound to a more coherent whole. 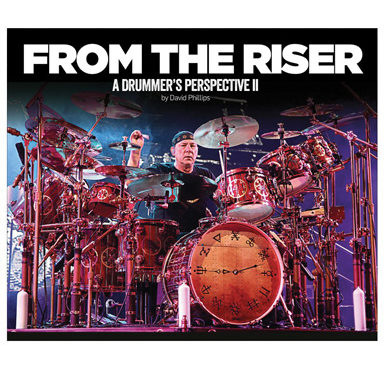 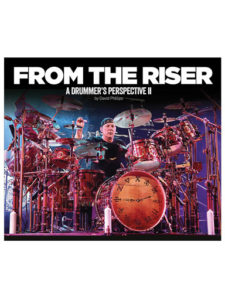 From the Riser: A Drummer’s Perspective II, by David Phillips,
A & R Marketing Limited, www.armarketing.co.uk.