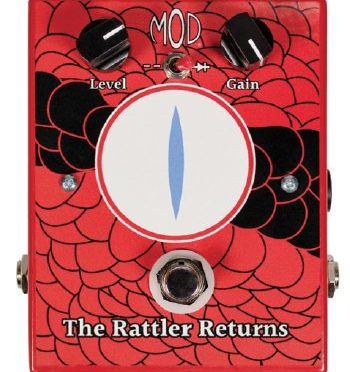 Mod Electronics has re-released a new and improved version of the original Mod pedal, The Rattler. The Rattler Returns offers the same over-the-top fuzz as the original Rattler and features several new upgrades. The circuit has been overhauled for a wider spectrum of fuzz that is steady when used with any pickups, pedals, or amps. The Rattler Returns preserves the diode clipping but also features a diode lift switch. With the lift engaged, the pedal can hit volumes that easily drive any tube or pedal with fuzzed out guitar tones. 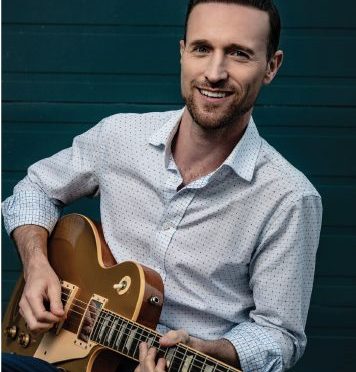 Canadian blues guitarist JW-Jones joined the AFM nearly 18 years ago, primarily for the visa assistance when touring the US that membership offered him. He has been a member in good standing ever since, but, honestly, he says, he has taken his union for granted. The COVID-19 pandemic and the shutdown of the music industry, however, have showed him the error of his complacency and given him a new appreciation for the power of collectivism.

As an artist who plays mostly in groups and who lives to jam and record with every legend he can find, Jones found himself having worrisome thoughts during COVID lockdowns, feeling like real-time collaboration might never happen again. But the Musicians’ Performance Trust Fund—a key partner with the AFM—came through, not just with a paid gig but with a chance to really make music.

“They paid union scale for these [internet live-streamed] performances, and it was a chance to actually play with my bandmates, to practice our material, to perform and know that people were able to see,” he says. “It sounds so simple, but it was huge after months of just playing by myself. And all that doubt, just poof! It was like ‘That’s it! That’s the feeling I remember! I am still inspired to play!’”

Amid the tension of the pandemic, the chance for a live show was both financially and emotionally helpful, but it also brought Jones, as a bandleader, huge peace of mind knowing that the relief fund administered through his local, Local 180 (Ottawa, ON), put literal money into the bank accounts of his bandmates. “Local 180 has been incredible. This is all tangible evidence that they can help you when you need it,” he says.

The tension of the lockdown stood in sharp contrast to the year that should have been. Jones rolled into 2020 strong, winning the coveted Gibson Guitarist Award at the International Blues Challenge in Memphis in early February, and making his way home to Ottawa, to prepare for a year of performing.

And then COVID brought the world to a halt. Jones found himself in lockdown with his family and endless free time on his hands, so he decided to dig into some recordings that he had set aside. Though he typically performs with a trio, just drums and bass behind his guitar, he had recently played shows with a big band, including a large horn section. He loved the sound and enjoyed the possibilities of performing with a large group, so they recorded a handful of tracks to use as a demo to secure more gigs.

“It was just going to be an EP originally, but I was there at home, in lockdown; I couldn’t play with my band, so I figured, ‘Why not?’ And decided to start playing around with it,” he says.

Lockdown offered the time and the freedom to get experimental, and Jones leaned into that. Going the experimental route is sometimes a taboo in deep-rooted genres like blues, where gatekeepers and tastemakers can sometimes act as the purity police.

Jones grew up with music-loving parents in a house full of records of all kinds, from the Beatles and the Rolling Stones to Canadian folk. He took to the drum kit in his early teens, but when he saw B.B. King in concert at age 15, it all changed. He picked up a guitar and taught himself to play, spending countless hours learning to play legendary licks, note-for-note.

“When I started playing, I was totally one of those people,” he says. “It was all about recreating that perfect sound. All I cared about was my heroes, my favorite guitar players; I wanted them to see what I was doing as being impressive, keeping the old stuff alive. But slowly, I evolved more and more. It’s taken a long time to get to the point where I no longer care about what anyone thinks. I’m just making music that I love. I’m so fortunate to be at the point in my career where I know my fanbase will be with me no matter what. But you can’t just change things for change’s sake, it has to be coming from somewhere; you have to really feel like something is worth changing.”

The new album is fittingly called Sonic Departures, and it delivers on that title. That’s not to say that it’s not wholeheartedly a blues album; it is. But between the big-band sound and a heavy slate of original songs, the listener is certainly invited to do a bit of exploring on their own. Adding to the originality: a few touches of whimsy also provoked by lockdown and the limiting of personnel that came with it.

“My wife actually sang backup on [the record]. She doesn’t think of herself as a professional musician, but she has a great voice and she can sing harmony on absolutely anything. So I got her to sing on it and that was a lot of fun.”

Jones and his wife also have a toddler-aged daughter who got in on the action. Like so many children of musicians, her toys include not just blocks and board books, but also the array of noisemakers that fill all the spare space in the house.

“She noticed the microphone one day,” Jones laughs. “She liked that! You speak into this thing and pow! Your voice is loud! So she was playing around on it, and my producer decided to hit ‘record’ and we actually sampled her voice and used the sample on the record; [we] turned it into this weird, loopy intro. That little ‘wah wah wah’ voice at the beginning of ‘Snatchin’ it Back,’ that’s her!”

Jones has not yet signed up his toddler for her first union card, although the future holds plenty of possibility, he says. 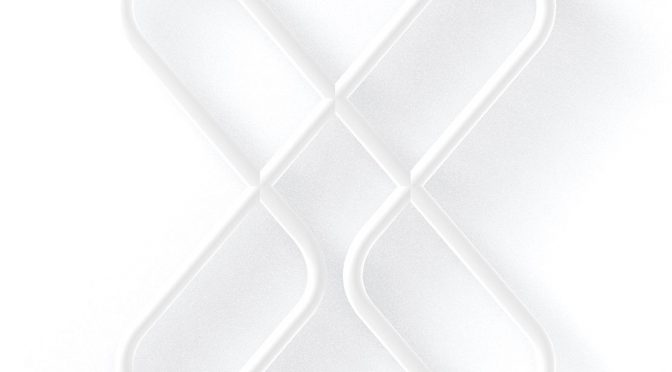 The new D’Addario XS coated guitar strings offer a new, thin film coating (1/10 the thickness of a human hair) that protects the wound strings from corrosion without dampening the tone. This new film covering is combined with D’Addario’s proprietary dispersion coating to protect the plain steel strings as well. The XS also incorporate D’Addario’s NY steel high-carbon cores in the wound strings and Fusion Twist technology in the plain steels to offer high break strength and tuning stability. Available beginning in April for acoustic guitar, 12-string guitar, and mandolin in the most popular gauges. 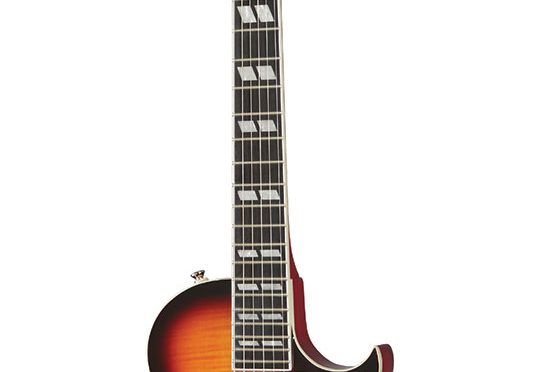 The Nancy Wilson Fanatic guitar is created and co-designed by Nancy Wilson of Heart, member of Local 76-493 (Seattle, WA), and the luthiers at Epiphone. The Fanatic features a classic nighthawk shaped mahogany body and a figured maple veneer top. It comes equipped with ProBucker humbuckers, a five-way pickup selector switch for a wide variety of tonal options, master volume and tone controls, a fast-playing rounded C profile mahogany neck with an ebony fretboard, and a fireburst gloss finish. 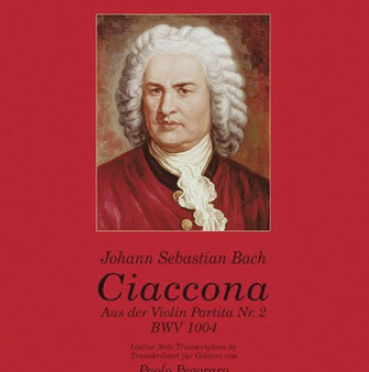 This new transcription of the famous Ciaccona from the Second Violin Partita (BWV1004) is the result of many years of research by Italian guitarist Paolo Pegoraro in style and interpretation, both as a performer and teacher. In preparing this edition, Pegoraro has always kept Bach’s original text foremost, while making it suitable for a plucked instrument and recalling the emotional language and timbre of the Baroque lute. 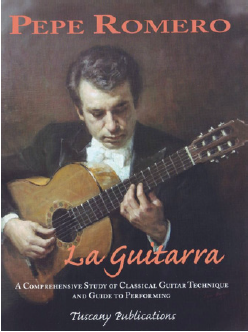 This revised and expanded edition of Pepe Romero’s Guitar Style and Technique (1982), which had been out of print for some time, features new sections on tremolo, flamenco, concert performance, additional finger gymnastics, and a Romero photo album. It contains all of the music from the earlier version and several new pieces, all newly engraved. Romero is a member of Local 47 (Los Angeles, CA). 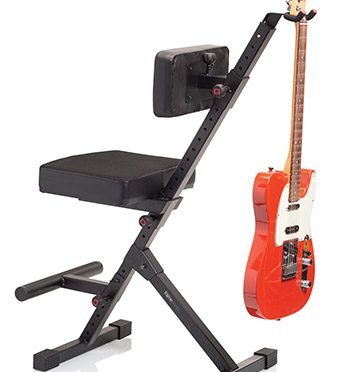 Gator Frameworks’ new deluxe guitar player’s seat comes equipped with a three-point height adjustment system designed to give maximum control over your sitting position. Offers quick and easy height adjustments of the seat, backrest, and footrest. Includes foam padded seat cushion, grip tape on the foot rest, and rubber feet on the base of the seat. When not in use, hang your instrument on the rear-side yoke. 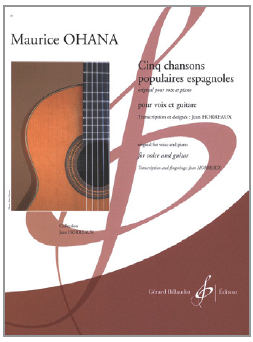 These five poems by anonymous authors were set for voice and piano by Ohana in 1987 in a collection of originally eight songs. Jean Horreaux has transcribed five of the songs for guitar accompaniment, and includes versions of each in both high and low voices. 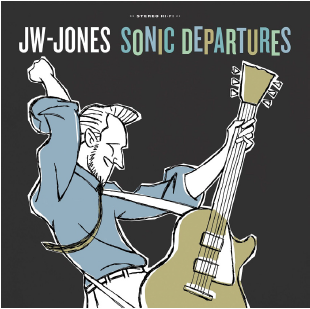 Fresh off the heels of winning Best Guitarist at the 2020 International Blues Challenge in Memphis, JW-Jones, of Local 180 (Ottawa, ON) was excited for a huge year before COVID-19 hit and halted his tour schedule. “l knew I had to do something productive to stay positive, so I turned isolation into inspiration,” said the JUNO-nominated guitarist, whose axemanship has been praised in recent years by legendary blues artists Buddy Guy (Local 10-208, Chicago) and Chuck Leavell (Local 148-642, Atlanta).

The result was Sonic Departures, comprising nine songs of original music and previously unreleased tracks. “This album sounds bigger and wider-than-ever,” says Jones. It features a 17-piece band with a 13-piece horn section, plus additional tracking of vocals, guitars, and studio effects.

Joining Jones on the album were his wife, Brit, singing harmonies, and a vocal sample from his 15-month-old daughter. 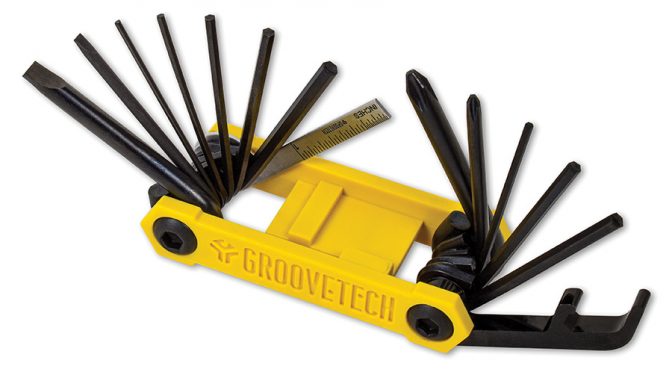 GrooveTech Tools’ newest guitar and bass multi-tool, the Mini-Multi, consolidates 14 tools into a body that’s less than three inches long. Included are eight hex wrenches, four screwdrivers, and a precision ruler. And for those important moments, a bottle opener is provided. Sizes are in both meters and inches for use on most makes and models of guitars and basses. Tools are prograde and made to precision tolerances.