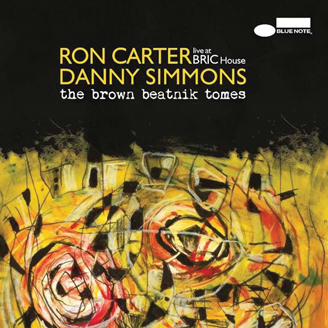 This live recording from BRIC House in Brooklyn captured the Tony Award-winning Simmons, the co-founder of Def Poetry Jam, reading poetry from his collection of prose, The Brown Beatnik Tomes, with projections of his own abstract expressionist paintings providing the stage backdrop while Carter, the veteran of Miles Davis’ band and more than 2,200 sessions, performed solo accompaniment along with instrumental interludes from his fleet trio.

“I hear the rhythm and cadence in my head when I write,” says Simmons. “To stand up there and have to reproduce that with somebody as accomplished as Ron was a little… I’m going to say ‘terrifying.’ Basically, I let him do his thing and I followed.”

Then, somewhat surprisingly for a musician of Carter’s stature, he adds, “I always blush a little when I get those phone calls.”

One reason that so many young musicians, in and out of the jazz world, know Carter, a member of Local 802 (New York City), is that he is incredibly prolific. To date, he has recorded on more than 2,500 albums.

Another reason is that the roll call of front men and women Carter has played for includes some of jazz’s greatest legends: Miles Davis, Lena Horne, Wes Montgomery, McCoy Tyner, Stanley Turrentine, Stan Getz, and Milt Jackson, to name a few. A good website helps, too: at www.roncarter.net, fans young and old can listen to his work directly.

Then there is the fact that over the years Carter has built a reputation for lending his wisdom to projects outside of the jazz genre. He has played blues with BB King of Local 71 (Memphis, TN), funk with James Brown, soul with Aretha Franklin and Roberta Flack of Local 161-710 (Washington, DC), and even modern classical with the Kronos Quartet. “I’m always happy to broaden my horizons,” he says, “and people call me because they seem to trust my judgment.”

“I’ve played as a sideman all the way,” explains Carter, looking back on his 50-year career. “My job has always been to make the musicians around me sound much better. I have not minded subjugating my ego eight bars back if I know that I can contribute to a successful project.”

As an example of how he fulfills the role of sideman, Carter recalls one project with Stanley Turrentine when the group was searching for numbers to fill out an album. “At that point, someone had to step forward and make suggestions about tunes and arrangements, and I’ve been known to do that.” Carter then puts his role in military terms: “The frontman is like a general sitting at the desk, while I’m an officer in the field.”

But everyone at some point wants to be a band leader, admits Carter, and in this latest stage of his storied career, he has decided to see if some of his own ideas about how to lead a band, learned by watching jazz’s greatest leaders at work, can come to fruition. Carter has recorded several albums recently as a bandleader, including The Golden Striker for Blue Note Records.

“I’m absolutely pleased with what I’ve done as a leader,” he says, adding that it’s still frustrating when club managers want to book bands that have a trumpet player or singer out front. “But I’m comfortable that my approach is the correct one,” Carter asserts.

In a way, fronting his own jazz combos–either a trio, quartet, or nonet–is a return to Carter’s earliest days as a jazz bassist, when he started up a quartet with like-minded musicians in his neighborhood, having left behind the cello as an 18-year-old in Ferndale, Michigan.

After high school Carter attended Wayne State University, near Detroit, and soon heard about an audition for the Eastman School of Music in Rochester, New York. “I auditioned in 1955 while the recruiters were in my area,” recalls Carter.

Carter remembers his time at Eastman as a fabulous experience that gave him many chances to perform and gain valuable experience as a sideman. Eastman also gave the jazz player a classical music education (he played in the Eastman Philharmonic Orchestra), which extended his range. “Eastman’s classical music education gave me new skills and helped me become a more diverse musician,” Carter explains.

After earning his bachelor’s degree in music at Eastman, Carter went on to earn a masters degree in double bass at the Manhattan School of Music. Today, those two diplomas are joined by honorary doctorates from the New England Conservatory and the Manhattan School of Music, and in 2002 his alma mater recognized him with its prestigious Hutchinson Award.

In 1960 Carter joined the all-union Randy Weston Quartet and began his professional career. After leaving Weston, he freelanced in New York City, where his reputation grew enough for Miles Davis to take notice. “In those day, Miles’ concerts were one night gigs for me,” Carter remembers. “Whenever Miles had gigs though, I’d be performing.”

The call from Davis proved fortuitous when Carter’s became one element of the latest sound the great trumpet player was experimenting with. “When I played with Miles, it was like having five men in a laboratory with the same goal,” he explains. Those five men came to be known as one of most legendary groups in jazz history: along with Davis and Carter, it featured George Coleman on tenor sax and Herbie Hancock on piano, both of Local 802, and Tony Williams on drums.

When asked what it was like when these musicians got together to rehearse, Carter replies, remarkably, that “we only had two rehearsals during my five years with the group.” What made it work, he says, is that there was absolute trust between the musicians. “It was a collective,” Carter continues. “The sidemen were all equal and Miles allowed us to be equal with him.”

While Carter was working at the Half Note in March 1963, Davis was reorganizing his road band and asked Carter if he’d like to join full-time. He agreed and began a new chapter of his life as a traveling musician, playing with Davis all over the country, as well as on the classic albums Four & More, Miles Smiles, Sorcerer, and others.

Life on the road proved challenging, though, especially when Carter became a father. “I truly enjoyed working with Miles, but I had two sons born in 1962 and 1965, and playing in the band made me feel as if they were growing up without me,” he admits, “so I left the band.”

Today, Carter is recognized as a legend in his own right, a status measured to some degree by awards bestowed on him. He has been named Outstanding Bassist of the Decade by the Detroit News, Jazz Bassist of the Year by Downbeat magazine, Most Valuable Player by the National Academy of Recording Arts and Sciences, and he received Grammys in 1993 for Best Jazz Instrumental Group and in 1998 for the Best Instrumental Composition.

The elder statesman is well-positioned to comment on the contemporary jazz scene. “There’s more of a responsibility put on vocalists and the media these days,” Carter observes. “In the past, when I was growing up, there were more clubs, radio stations, and more jazz in movies as well.” In other words, says Carter, jazz was more accessible in the ’50s and ’60s.

But that doesn’t mean jazz is a dying art. In fact, Carter is still busy mentoring the next generation of jazz bassists, previously as the Artistic Director of the Thelonious Monk Institute of Jazz Studies and these days as Distinguished Professor Emeritus of The City College of New York.

“Be prepared for anything that may come your way,” is Carter’s advice to his students, “then you can always find work playing music.” At the same time, Carter warns young musicians that the industry is a different game then when he got his start. Today, for instance, the need to make your name visible is crucial in a world flooded with new artists and new forms of media.

Talking about the technical side of his art, Carter explains that the situation for a bass player has changed in the past few decades. “One reason for this that is overlooked is the influence of electric basses and amplifiers,” says Carter, who experimented with the electric bass in the ’60s and ’70s before concentrating on the upright. “Now, a bass player has the same what I call “sonic presence’ as other members of a group. They can be heard equally, and with that a bass player can become more comfortable with the idea that his or her intent will get attention.” Through this, a modern bass player is given the courage to try new things, he adds.

As if to lead the way for his students, Carter is still trying new things, and dismissing any talk of retirement. “I’m continually performing,” he concludes, “I played both at Carnegie Hall and Lincoln Center recently. I’m getting better everyday, and I’m still growing in my career.”