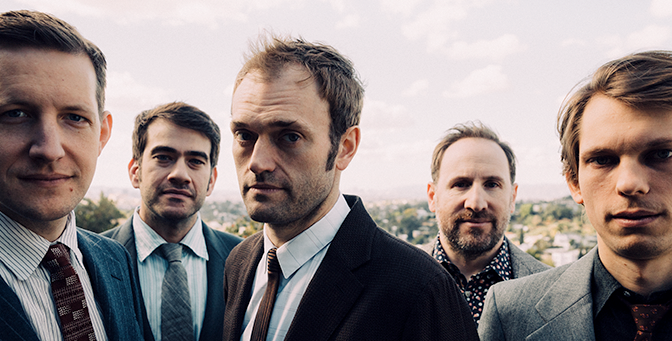 It’s been 12 years since the young band of virtuosic players known as Punch Brothers first gathered early in their careers. Together, they have grown up in the industry, developing a deeper, more mature sound as a quintet, while each of them expanded their multifaceted individual careers.

Today, each of the Local 257 (Nashville, TN) members remains steadfast in his dedication to Punch Brothers, which released its fifth studio album, All Ashore, in July. Their first self-produced album is a nine-movement suite of interconnected themes and stories.

Chris Eldridge says it’s “huge” for career musicians to join together in union. Acting as spokesperson for the group he says, “As musicians, in the face of people more rich and powerful than we are, it’s a big deal.”

“We started out working on this really ambitious piece of music together, and as time went on, we developed a voice as a band,” says Eldridge. “When we all got into a room together it felt special.” The quintet ultimately settled on Punch Brothers—drawn from Mark Twain’s “A Literary Nightmare.”

The Blind Leaving the Blind, Thile’s four-movement, 40-minute suite for bluegrass instruments debuted in 2007 at Carnegie Hall. Punch, the group’s first album on Nonesuch Records, featured the suite and other original songs from the quintet.

Four more albums, two EPs, and multiple tours have followed for the bluegrass-influenced group that defies genre definition. As the group has evolved, so has each of its members’ solo careers. Garrison left after the first album.  Paul Kowert, the band’s youngest member, stepped in.

At the start, they were idealistic musicians who were already recognized instrumentalists. It’s almost like the band grew up together as individuals, musicians, and friends, says Eldridge. “For such a long time the band was a core focus—everybody’s life orbited around Punch Brothers. But now we all have other things going on—people are married and have kids.”

“The music that we make and the language, rapport, and influences we’ve built on and developed together,” says Eldridge. “It’s been kind of a constant evolution to become better at recognizing our strengths and playing to them.”

Members of the Family

“Being in a band is much like being in a family or a relationship. We’ve spent thousands of hours playing music together and we’ve certainly grown together in that way—something like the way siblings can really sing together.” Eldridge says. “The band is a real mutual admiration society. Everybody loves music so deeply and has their own musical personality that they bring to the stew of the band.”

Eldridge describes Chris Thile, as “one of the most brilliant musicians on the planet…with an incredible ability to mastermind the architecture of music.” A mandolin prodigy, Thile co-founded the acoustic trio Nickel Creek as a child. He made his first solo album at 13, following in the steps of progressive bluegrass players like Béla Fleck and Edgar Meyer, both members of Local 257. Thile was IBMA Mandolin Player of the Year in 2001, at age 20, and a MacArthur Fellow at 31.

In 2016 Thile took over hosting duties for Live from Here (formerly A Prairie Home Companion). He released Thanks for Listening, a collection of songs written for the program in 2017.

Fiddler Gabe Witcher performed in his family’s band as a youngster. He first jammed with Thile after meeting as children at a bluegrass festival. Witcher went on to be an accomplished producer who took much of the lead in producing All Ashore. He also produced Grammy-nominated albums for Eldridge and Pikelny.

Paul Kowert records and tours with the Dave Rawlings Machine. He released the album Unless with the band Hawktail in 2018. “Paul’s an unbelievably incredible musician who can literally do anything that anyone can on the acoustic bass,” says Eldridge. He says that Paul keeps Punch Brothers grounded. “He’s pure in his sensibility of when music’s good and when it’s not.”

“Noam [Pikelny] is so ingenious at coming up with incredible textures on his instrument,” says Eldridge. “He can play so sensitively—like the world’s most lyrical banjo player. And he has such an intelligent and beautiful sense of curiosity about the instrument—an incredible work ethic.” Noam’s fourth album Universal Favorite (2017) garnered a Grammy nomination. He was IBMA Banjo Player of the Year in 2014 and 2017.

Eldridge, whose first instrument was his voice, is the son of banjo player Ben Eldridge of The Seldom Scene and grew up at bluegrass festivals. He played electric guitar from age nine and then moved to acoustic after discovering Tony Rice. His former band Stringdusters won three IBMA Awards following the album Fork In the Road (2007). Mount Royal, his 2017 album with Julian Lage, was nominated for a Grammy.

Eldridge is a member of the Live from Here house band. Too modest to discuss his own talent, the virtuosic player says he sees himself as a glue that helps keep Punch Brothers together.

Synergy of Side Projects

With such a wide range of side projects going on, Eldridge admits it’s harder these days to be Punch Brothers. “We just have to be deliberate about it. Now that we’re older—adults in every sense of the word—and we weren’t when the band started,” he says families and work/life balance are the biggest complicating factors. “It’s not full-time like when we were younger and I don’t think it ever will be again. There’s something beautiful about having new experiences—that’s so important. And then we bring that back to the band.”

For example, his work with Lage brought him back to improvising. “That project, in a way, couldn’t have been further from what I do with Punch Brothers. I reconnected with being an improviser. Then when we came back to make the new record I had a new tool to play with,” says Eldridge.
One thing that helps with scheduling, he explains, is that the Punch Brothers management team also manages many of their solo projects. “That’s a really big deal. We are existing a couple years in the future; it’s a lot of planning ahead,” he says.

Known for their individual instrumental prowess, in recent years the quintet has focused on vocals. “At the start we did a lot more chopsy, crazy playing. We don’t have a lot to prove in that department anymore. That kind of creates a space to work on other things. Singing is something we’ve been trying to get better at.”

The group describes All Ashore, their fifth studio album, as a reflection of how the political landscape affects personal relationships, parenthood, and human interactions. It’s a meditation on committed relationships. Thile describes the album as a complete thought, a single nine-movement piece of music.

He says they went into the recording session while some of the material was still rough. “In the past when we’ve gone in to record, the music’s been pretty well locked down,” he says. The change, to a certain extent, served a purpose.

“There are certain times when we want the tape to be rolling the first time. There is magic the first time we play it right that we never get back. We were trying to leave space for that intangible magic to appear,” he says. “But also on this record, with everybody’s hectic lives, we didn’t have as much time to prepare. We also left space to be able to go back and revise stuff.”

The blueprint for All Ashore came from discussions the band had on tour. “The music really gets written collectively in a room with ideas coming from anybody within the band,” he says. “Thile will start singing dummy lyrics—something he learned from the Jayhawks’ Gary Louris.” Real lyrics gel after the song is written.

“Thile does all the lyric writing. We joke that it’s sort of like the United Nations where everybody gets veto power on the lyrical front,” says Eldridge. “We won’t let something out unless everybody is happy and that can be frustrating. There have been times where everybody is digging what’s happening except one person. Usually we work on it until everybody is happy,” he says and usually everyone agrees the new version is better. “That’s one of the cool reasons to be in a band. As long as you’re with people who you trust and respect, five heads are better than one.”

Punch Brothers wound up the year with a November tour of Europe. They will be touring the US again in March 2019. “It’s a lifer band; there’s no doubt about it,” says Eldridge. “I can’t imagine anything ever being more important or sacred to us than Punch Brothers.”

The self-produced album All Ashore includes nine originals from the Punch Brothers, a quintet of Local 257 (Nashville, TN) members Chis Thile (mandolin/lead singer), Chris Eldridge (guitar), Paul Kowert (bass), and Noam Pikelny (banjo), and Local 47 (Los Angeles, CA) member Gabe Witcher (fiddle). Thile says the album is “a meditation on committed relationships in the present day, particularly, in the present political climate.” It is the bands’ fourth album. “Going in we knew what we needed it to sound like and I think we had a specific enough vision to make the reality match up with that,” he says. The self-produced album was recorded at United Recording Studios in Hollywood in the same room as their previous release, The Phosphorescent Blues (2015) and Antifogmatic (2010). Punch Brothers began a 36-city tour in July.