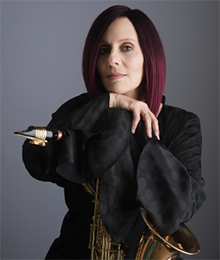 A review on jazz saxophonist and arranger Leigh Pilzer’s website describes her playing as “gruff and punchy,” with “a lot to say.” Speaking with Pilzer, you quickly realize she herself is anything but gruff. But she does indeed have a lot to say. A member of the Smithsonian Jazz Masterworks Orchestra, the Bohemian Caverns Jazz Orchestra, and DIVA (more on that later), Pilzer has toured extensively, and her arrangements enjoy regular play by college and professional jazz groups, including DC-area military jazz bands.

A DC native and longtime member of Local 161-710 (Washington, DC), Pilzer played cello as a kid, but that all changed in high school the first time she saw a big band. “I used to go hear live music with friends after orchestra rehearsals,” she recalls. “One day I met Bill Potts, a writer/pianist/arranger at a local community college. He played some jazz music for me—and then he took me to hear Count Basie.” Pilzer likens that to a line by Mario Puzo in The Godfather: “You can’t hide the thunderbolt. When it hits you, everybody can see it.” She suddenly knew she needed to play jazz.

“As a cellist, the logical choice would have been bass. But I wanted a clean slate. So I chose the saxophone.” Pilzer started on an alto. After just six months, she had a Goldilocks moment when she got called for a gig at the same community college. “The baritone sax player couldn’t make the gig, so they handed me the big bari. And immediately I knew it was the right fit.”

She cemented that fit at the Berklee College of Music—along with other skills that would later be combined in her professional life. “I had gotten a great grounding in music theory and arranging from Bill Potts at the community college back home, so I studied arranging at Berklee,” she says. “But toward the end of my time there, I also realized I really did love playing and making music with other people.” Pilzer feels she’s fortunate to be from Washington, DC, which she says offers a large and varied amount of work. From the moment she graduated, she was playing clubs, corporate shows, and gigging with the National Symphony Orchestra on its pops concerts.

At Berklee, Pilzer had tested out of the first two years of theory and advanced into upper-level arranging classes. Jump to today, where her arrangements have been widely adopted by big bands. Pilzer finished her doctorate in May of this year, and with live performances halted by the COVID-19 pandemic, she began wondering what was next. The obvious answer was a natural segue from arranging to composition. “My arranging has tended toward standard forms like the Great American Songbook and Ellington,” she says. “But I’m taking an online jazz composition course at Berklee and I’ve started looking at composing in a different way than I have before—freer, less tune- or form-based.” Big band, says Pilzer, is still the voice she hears in her head, but these days she can now also see herself writing for smaller groups.

But still, there’s the nagging longing to make music—even in a pandemic. While she admits it doesn’t take the place of a live audience, she and a few DIVA colleagues have started using JamKazam, a nifty little piece of tech that allows for real-time interaction over the Internet. DIVA, for those unfamiliar, is an all-female jazz orchestra. Pilzer has been a permanent member on bari sax since 2003— “Well, I actually stalked them since 1992,” she laughs—and has also done orchestrations for them. “I love my male colleagues, but the hang with DIVA is a little different. And the young women we play for are inspired by DIVA in a way that other bands can’t. It has a tremendous impact on them.” And also, on the younger men, Pilzer points out, who might not realize that many women do this.

“With JamKazam we streamed some material, including a three-movement suite,” she says. “It’s strange with no audience. But we banter between ourselves and interact, and we draw the (virtual) audience in. We invite listeners into our process and our experience. They feel the love.” Pilzer was recently approached about outdoor concerts, 45-minute sets at DC-area homes. Like so many others, she is cautious about restarting. “As a wind player, I can’t be masked. It’s hard to protect the people around me until we know a bit more about the risks.”

When live performance does resume, Pilzer knows the AFM will have her covered, as it always has in past. “I joined the union as soon as I finished college,” she recalls. “My first gig with the National Symphony was with Mel Torme. And playing Capitol Concerts and Memorial Day concerts with them have been extremely moving experiences. I would certainly not be doing any of this without union membership. When I think about it, many of my most memorable career highlights have been through the union.”

For more on Leigh Pilzer, visit her website at www.leighpilzer.com. For info on the DIVA Jazz Orchestra, visit www.divajazz.com.

Baritone: My main instrument is a late 1950s low A Selmer Mark VI with a hard rubber Berg Larsen 110/0 refaced by Brian Powell, with Select Jazz 3S reeds. Travel horn is a Yanagisawa B992, with same mouthpiece and reeds. I also have a mid 1960s low Bb Selmer Mark VI. Mouthpiece for that horn is either one of the Bergs or a hard rubber Vandoren V16, also refaced by Brian Powell.

Favorite Apps: Finale and ForScore. These days, other regularly used software also includes Logic, Final Cut, and JamKazam, in combination with a Focusrite Scarlett 2i2 interface and a Shure KSM32 mic.

WNO initially proposed a three-year agreement with a 10% reduction in work and no wage increases, while the Kennedy Center initially offered a three-year agreement with a work reduction of one week (14%) in the second and third years. Musicians’ salaries under the combined contracts will be just above $70,000 for the 2017-2018 season—a small increase. The orchestras’ librarians are now covered as bargaining unit members under the two CBAs. The Kennedy Center Opera House season is seven weeks long, while the WNO contract totals 342 hours, within a 21-week period.

“We hope that the additional year will give the opera some breathing room, so that the opera season cuts we conceded in previous agreements will turn out to be only temporary,” says Orchestra Committee Chair Peter de Boor of Local 161-710.

During Labor Day, the Fight for $15 movement organized protests in 300 cities across the US. In Chicago, hundreds of fast food workers, hospital employees, and airport workers advocated for higher wages and better benefits through a series of walkouts and marches. Members of the Service Employees International Union (SEIU) demonstrated with supporters of the national Fight for $15 movement. Illinois Republican Governor Bruce Rauner recently vetoed a bill that would have raised the minimum wage to $15 an hour by 2022, arguing that it would negatively affect businesses and reduce jobs.

Fast food workers in Boston went on strike Labor Day to highlight their demand for a $15 minimum wage. In Massachusetts, the $15 minimum applies to home care workers and select companies that have chosen to offer it. A planned November 2018 ballot proposal would incrementally raise the minimum from $11 to $15 by 2022.

The $15 minimum wage has been implemented in New York City, California, Seattle, Washington, D.C., and Minneapolis.

On November 4, AFM members across the country exercised their rights as they voted in national midterm elections. As Republican candidates picked up victories across the country, important AFM House and Senate champions from both parties were able to retain their seats. Our eyes were set on those who, over the years, have exercised leadership with legislation and regulatory issues we currently have moving in Washington, DC.

Two critical retirements by longtime arts and entertainment supporters, Senator Carl Levin (D-MI) and Representative Howard Coble (R-NC), will have a profound positive impact on AFM labor, aviation, film, and copyright issues moving currently and in the future. We wish them well in retirement.

The 2014 midterm elections ushered in a host of new congressional members shifting the Senate majority from Democratic to Republican, while newly elected Republican members boost the current House Majority. In the House, Representative John Boehner (R- OH) is expected to retain his position as Speaker of the House, while Senate Minority Leader Mitch McConnell (R-KY) will most likely replace current Senate Democratic Majority Leader Harry Reid (D-NV). Both chambers are fairly well seated with the exception of at least one important race that will not be decided until long after November 4. Current 113th Congress Senate member include 53 Democrats, 45 Republicans, and two Independents. Changes following the 2014 election set the new numbers at 44 Democrats, 53 Republicans, two independents, with one unsettled race in Louisiana.

As of the end of November, one Senate run-off election is still to be settled. Incumbent Democratic Senator Mary Landrieu is locked in a run-off battle against Republican Bill Cassidy. The run-off will take place December 6.

There were 36 governorships up for election, as well as governorships in the American territories of Northern Marianas Islands, Guam, and the US Virgin Islands. After November 4, Republicans maintained majority leadership in the national governor’s association with 25 Republican, 10 Democratic and two independent governors winning their elections.

As the AFM looks forward to moving legislation in Washington, DC, it is even more important to call on AFM members to engage their representatives in the Congress. This includes telephone calls, letters, e-mails, and other methods of communication that give a clear indication about the depth of our organization and the strength of our resolve.

The AFM will be confronted with tax, immigration, employment, healthcare, arts and entertainment, copyright, aviation, and other issues that will have a profound impact on our industry. I want to thank members who weigh in on these issues and encourage others to join in our government relations efforts. It is the responsibility in the Office of Government Relations to address matters that impact every segment of our union. Your voice is always welcome. When the 114th Congress gavels in this January 2015, we will again ask for your help. We know you will come through in the future as effectively as you have in the past. Thank you for your service and thank you for voting. Feel free to contact my office if you have questions or need information about the issues.