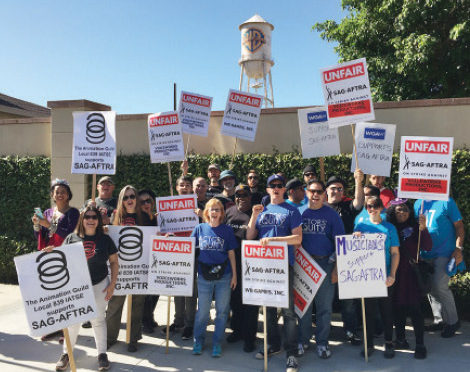 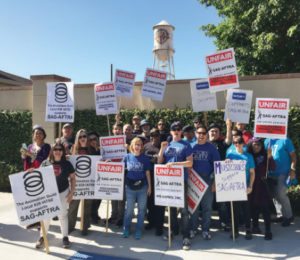 Members of AFM Local 47 (in light blue t-shirts) joined with hundreds of SAG-AFTRA members, labor, and community supporters on a November 3 picket line outside of Warner Bros. Studios in support of SAG-AFTRA’s video game strike.

In October, SAG-AFTRA called a strike against certain video game producers. SAG-AFTRA members have sought, through two years of negotiations, to modernize a decades old contract covering voiceover and performance capture artists. Among other  issues, they are fighting for transparency—knowing what the project is before signing on, reasonable secondary compensation for every 2 million copies, and safety—the use of stunt coordinators and protections from vocal stress.

“We, as professional musicians, support our SAG-AFTRA counterparts in their fight for fair and safe workplace agreements. The gaming industry has undergone its second or third boom and terms need to be updated accordingly. The working relationship between entertainment companies and the talent they employ to generate their products predates the industrial revolutionary by millennia and isn’t going to change. For this reason alone, I believe a strong agreement will eventually be reached. Please help spread the word about this issue,” says AFM Local 47 member Andy Moresi.

“Each picket has brought out more members than the last,” says SAG-AFTRA President Gabrielle Carteris in a press release. “SAG-AFTRA members and our allies support this action and are continually raising the pressure on the video game companies to come back to the bargaining table with fair proposals so we can reach a deal.”

“The video game corporations we’re striking have tried to sow divisions among our membership, instead of returning to the bargaining table to negotiate a fair contract,” she says. “Not only are SAG-AFTRA members united in this strike action, but they have the support of their union brothers and sisters.”

At this writing, SAG-AFTRA has held pickets outside four of the 11 companies. Additional pickets are planned. There are also virtual picket lines on social media using the hashtag #PerformanceMatters and sharing SAG-AFTRA’s message to raise awareness during the holiday shopping season.

Last month, I promised to report on discussions I had in London with representatives of the British Musicians’ Union (BMU), prior to heading to Budapest for the first International Conference on Music Streaming. The purpose of my London visit was to verify the BMU’s promulgated terms, conditions, and practices covering the services of contractors, musicians, arrangers, and copyists engaged in the UK for the recording of videogame scores.