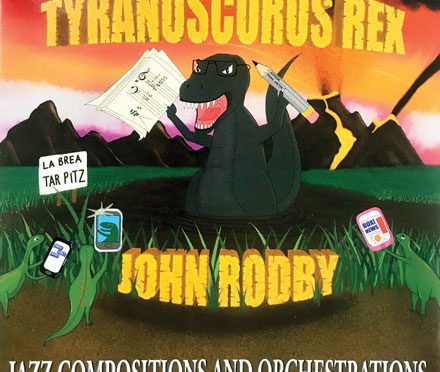 Local 47 (Los Angeles, CA) member John Rodby makes reference to his aversion to the use of computers in composition and orchestration with the title Tyranoscorus Rex. “The project is a lifelong dream of mine to write jazz for a large orchestra,” he says. Describing the release he says it has components you don’t hear much of anymore: “counterpoint, harmonic voice leading, orchestral color, dynamics, ensemble playing, no sequencing, and absolutely superb playing by 38 of Los Angeles’s best musicians.”

Most of Rodby’s career has been in television and film. He was musical director for Dinah Shore for 26 years. He has worked as keyboardist-arranger for many well-known musicians, including Frank Sinatra and Liza Minnelli. The CD can be ordered by sending $18.50, which includes postage and handling, to John L. Rodby, 5351 Penfield Ave., Woodland Hills, California 91364-3536.