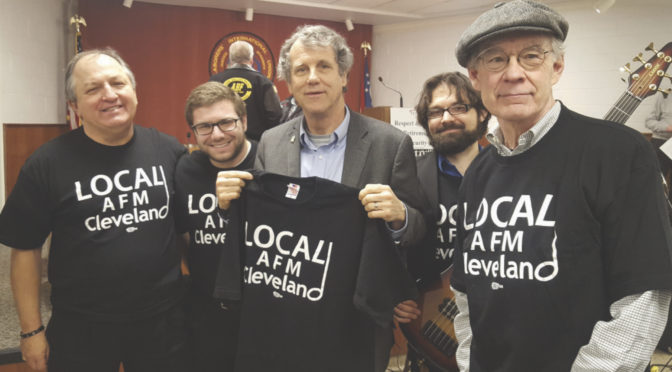 In March, Senator Sherrod Brown (OH-D) held a rally on his work and commitment for retirement security. The event was hosted by several organizations including the Cleveland AFL-CIO Retiree Council, Senior Voice!, and AFM Local 4 (Cleveland, OH). Brown is co-chair of the Joint Congressional Select Committee on Multi-Employer Pension Plans.

“Sherrod Brown has a long history as an independent voice for working-class Ohioans and their families. In addition to championing our earned retirement benefits, Senator Brown remains one of our strongest advocates for fair trade, social and economic justice, and sensible health care policies,” says Local 4 President Leonard DiCosimo. 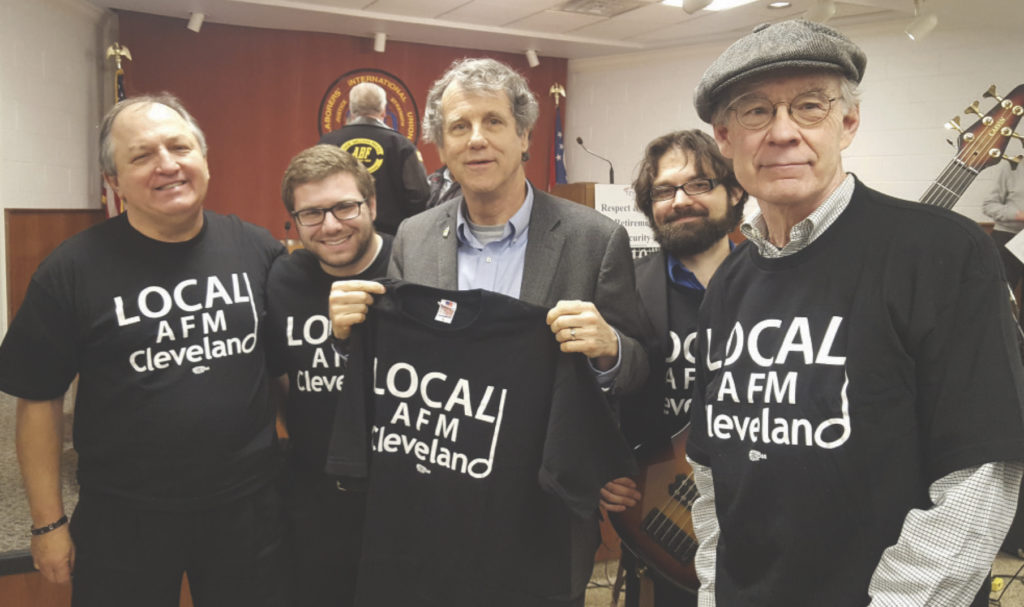 Musicians of the Dayton Philharmonic Orchestra (DPO), members of Local 101-473 (Dayton, OH), recently headed off an attempt by their employer to reopen talks when the ink was barely dry on a memorandum of agreement for a new CBA. The musicians, represented by Local 101-473 and assisted by AFM Symphonic Services Division (SSD) Negotiator Jane Owen, reached agreement on a new CBA with the Dayton Performing Arts Alliance in Spring 2017, after just five days of bargaining. The Dayton Performing Arts Alliance comprises the DPO, Dayton Ballet, and Dayton Opera.

Almost immediately after the new master agreement was ratified, the employer sought to reopen negotiations to address financial concerns that had allegedly arisen. With the support of Local 101-473 and SSD, the players committee refused to reopen the contract, but agreed to work with the employer in an effort to address its concerns. The result of those discussions was a side letter allowing the employer a brief extension of the season into June for the last three years of the contract to accommodate concert hall scheduling conflicts.

The new four-year agreement, which began in September 2017, freezes musician compensation for the first year, but includes wage increases for all musicians (contracted and substitutes/extras) of 1% in year two and 2% in years three and four. Though the previous agreement had slashed service counts, the new agreement increases service counts in year four, adding three additional services for all contracted musicians. Between five and 10 provisional services are now included for every level of the contract. Provisional services are defined as services that are guaranteed, but with no assigned date, time, location, or program. Fifty percent of these services are to be designated by September 15 and the other 50% by January 15 of each season.

Richard and Emily Smucker have pledged $15 million to The Cleveland Orchestra in celebration of its 100th season. The gift will fund artistic and education programs, with an emphasis on young people. In addition, a significant portion of the gift will support the orchestra’s endowment. The Smuckers have designated $3 million of their pledge as a challenge grant.

“The work these musicians do inspires audiences and young people throughout our community, across the nation, and around the world,” says Richard K. Smucker, who serves as president of The Cleveland Orchestra’s board of directors. “From my own life experience, I know that music has the power to change lives.” The musicians are members of Local 4 (Cleveland, OH).

Richard Smucker retired from his position as chief executive officer of the J. M. Smucker Company in 2016. He was elected board president of The Cleveland Orchestra March 2017; he has served on the board of trustees since 1989.

More than 200 workers at PTC Alliance went on strike August 18 at the end of their second shift after negotiations failed between the company and United Steelworkers Local 3059. Among the sticking points were the increased cost of insurance and the fact that the workers have not received a raise since July 2016, when there was a 40-cent across the board increase. Picketers at the Alliance, Ohio, plant are on duty 24/7, in four-hour shifts. According to Local 3059 President Jack Clouds, salaried employees are working the factory and keeping production going.