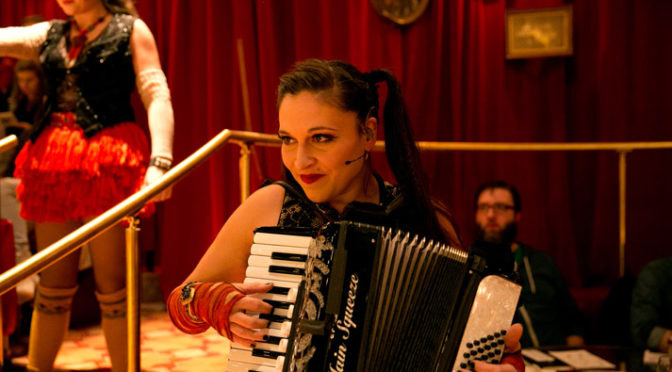 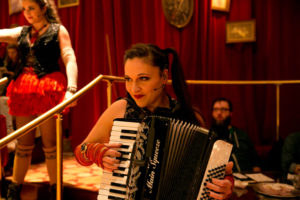 Actor-musician Katrina Yaukey of Local 802 (New York City) plays accordion on stage in the musical Natasha, Pierre and the Great Comet of 1812.

One of the radically innovative trends in theatre music has been the emergence of the actor-musician. These multi-talented artists serve not only as musicians in the show—often playing several instruments in one evening—they are also singing, dancing, acting, and delivering dialogue. And while these shows are not the norm, they also cannot be dismissed as mere outliers anymore. Shows such as the Tony Award-winning Once and Natasha, Pierre and the Great Comet of 1812—which debuts on Broadway this month—were originally conceived for actor-musicians. Others are radically reinvented revivals, from Sweeney Todd to Company, and two currently-touring union revivals, Cabaret and Into the Woods.

Actor-musician Katrina Yaukey of Local 802 (New York City) naturally fits the cross-discipline niche required for Natasha, Pierre and the Great Comet of 1812. A double major in musical theatre and musical performance (she is a classically trained oboist), her dual-discipline preparation uniquely positioned her to seize the actor-musician moment. But she admits that her Penn State professors were left scratching their heads at her decision to pursue two very demanding disciplines at the same time.

“I had the musical theatre department saying, ‘What are you doing? Oboe is a distraction!’” notes Yaukey. “And the music department was like, ‘You’re a good oboist—why are you doing this theatre thing?’” While this mix may still seem unnatural to many in the US and Canada, Yaukey notes that in England, universities already offer majors for “actor-musos,” as they call them.

Yaukey credits her parents for stoking her early musical passion and curiosity. “From the time I could stand, I was in front of the piano,” states Yaukey, who also pursued dance at an early age. “My parents had a band, Dean’s Duo—which got renamed to The Main Event, when my brothers and sisters and I were old enough to join.” While Yaukey was initially drawn to the violin, her public school music program lacked a string department. This led her to the oboe, and an eventual music scholarship to Penn State.

While still an undergraduate at Penn State, Yaukey took an audition on a whim, during a vacation to New York City. Much to her surprise, she landed the job touring as a dancer with the first national tour of Victor/Victoria. Noting her offstage skills as an oboist, a fellow touring actor encouraged Yaukey to audition for an actor-musician role in an upcoming revival of Cabaret on Broadway.

“On a break from tour, I went home and pulled out a tape recorder. I got out my oboe … and my brother’s flute, and my sister’s sax, and I played a little piano too,” she says. She eventually landed a role in the production, playing alto sax, tenor sax, clarinet, and keyboards during a four-year stint. And by the way, she also understudied the lead role of Sally Bowles. “Cabaret was the dream—the perfect mix of the two things I loved—music and acting,” she says. “I couldn’t believe I was getting to do all these things at once.”

Her next big role came in a reinvention of Stephen Sondheim’s Company, where she covered several roles playing flute, alto sax, trumpet, tuba, oboe, and piano. “I’ve always wanted to play everything—I think I got that from my parents!” she notes. With the money she was earning—working under the joint jurisdictions of Local 802 and Actors Equity—she was finally able to buy a violin and take lessons.

From here, she went on to play the role of Pirelli in the tour of Sweeney Todd, where she also played accordion, flute, and piano. Her varied career then took her to the play Warhorse and the national tour of Billy Elliot. In between gigs, she discovered a program at the Berklee College of Music that allowed her finally to finish—at the age of 40—her undergraduate degree in Music Production and Technology.

While her role in Natasha, Pierre and the Great Comet of 1812 has her playing only one instrument, the accordion, it still poses challenges. “Comet is like Cabaret taken to a whole new level,” she says. “It is very physical, like Once, requiring us to run, kick, play, and sing—often at the same time.” Comet creator Dave Malloy, a member of Local 802 and himself an actor-musician, was interested in an intimate exchange between performer and audience, with roving musicians intermingling with patrons. He created the show with many of his actor-musician friends in mind.

For Yaukey, curiosity and diversity have always been the core of her artistic passion. “It was never about being ‘the best’ for me. I didn’t want to be the best oboist, or pianist. It was more that I love all these instruments, and I love music.” Yaukey’s musical interest seems to have no limit. “I have 33 instruments underneath my piano right now, and I recently got an upright bass.”

Though she chose not to pursue the single-minded perfection of a career in oboe performance, Yaukey has no regrets. She is proof that you can do many things well in order to play—and sing, and dance, and act—your way to success.