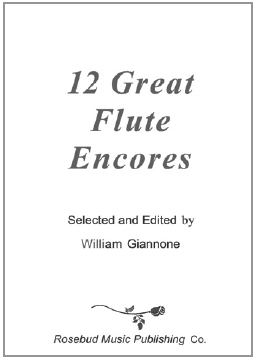 Flutist Bill Giannone, of Local 802 (New York City), has selected 12 well-known classical melodies and arranged them for solo flute with piano accompaniment in his new collection, 12 Great Flute Encores. Selections include Bach’s famous “Air on the G String” and the “Badinerie” from the Orchestral Suite No. 2, Debussy’s “Reverie” and the “Girl with the Flaxen Hair,” as well as Rachmaninoff’s “Vocalise,” among others. Giannone has taken these pieces and scored them for the flute’s range, along with thoughtful dynamic and phrase markings. 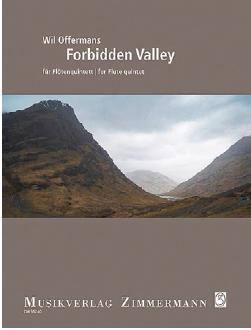 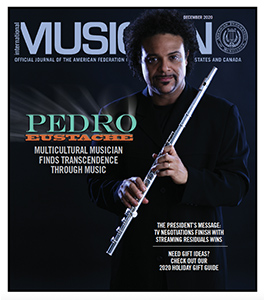 Every musician has at least one seminal moment in their life that defines their artistic career. Flutist and world woodwind player Pedro Eustache has several: the influence of his older brother, his experience as a founding member of Venezuela’s “El Sistema” OSSB Orchestra, and the death of his daughter. The first instilled in him his love of music and creativity; the second gave him the burning desire to learn and express music in different languages, while the third taught him perseverance and the need to make the most of every moment.

But above all of these, is Eustache’s love of God. “I am just a follower of Christ—everything is inspired, allowed, and nurtured by the grace of the Creator,” he says. He sees music as his calling: “What I do is a consequence of who I am—it’s a blessing to exercise that which I was created for.”

Eustache, a member of Local 47 (Los Angeles, CA) for the past 28 years, seems to have been created for quite a lot. He has years of education and professional experience in classical, jazz, world music, popular, and computer/electronic music genres. As a flutist, he is equally comfortable doing solo-recital, symphonic, jazz, pop, Latin, world-music, and contemporary/avant-garde work, and can transition from one to the other with effortless flexibility and stylistic appropriateness. His musical knowledge and technical command go beyond flute into reeds (saxophones and bass clarinet), nearly 600 world-music woodwinds from all six continents, and wind synthesis (both analog and digital, as a programmer and performer). He is also a researcher, composer, lecturer, and instrument maker.

Perhaps a phrase that best describes Eustache is musical polyglot. “At the DNA level, I am multicultural,” he says. “I believe I inherit the blessings of my ancestors.”

Eustache was born to Haitian parents—one white, one Black—and raised in Caracas, Venezuela, which he calls a “true melting pot” of cultures that influenced him greatly. He started listening to “great music” by age three, when his older brother, Michel Eustache (now an educator, musician, composer, and choir director in Chile), exposed him to his record collection of 3,000 LPs. “That’s something that impacts your soul at that age,” Eustache says. “He exposed me to so much. I owe him a lot. To this day I, am reaping the benefit of what he planted in me as a kid.”

Eustache started playing recorder at age 9— “exactly the same age when I decided to accept God’s gift in my life, so my spiritual walk and my musical endeavors are completely connected.” His first professional recording in a studio was at age 12. By age 14, he was playing violin, but “hated” it, so he gave it up. His brother, however, saw promise in Pedro’s talent, and would not let him quit music. Pedro wanted to follow his brother’s footsteps by playing flute, but the instrument did not really speak to him because it was more classical and he, as a teenager, was into rock. But then he heard the flute solo in the King Crimson song, “I talk to the wind,” in the early 1970s, and he realized he could play his brother’s instrument but also play rock n roll. “And I said, ‘Wow! … I want to do this.’ And that’s how I got into the flute.”

Eustache entered El Sistema, Venezuela’s National System of Youth and Children’s Orchestras and Choirs that uses music education as a vehicle for social change, and ultimately became the first piccolo in the Simón Bolívar Youth Orchestra (Orquesta Sinfónica Simón Bolívar). After graduating from El Sistema, Eustache received a scholarship from the Venezuelan government to study music in conservatories in France and Switzerland, where he studied under master flutists Raymond Guiot, Alain Marion, Pierre-Yves Artaud, and Aurèle Nicolet. His years abroad also exposed him to musical styles beyond Western classical and into African, Indian, Arabic, and Japanese. “This was like an explosion in my heart, and that made me want to express myself in other languages,” he says.

After completing his studies in Europe, Eustache returned to Venezuela and became the principal solo flute in the Simón Bolívar Symphony Orchestra and taught at the conservatory. He also began attending traditional Venezuelan percussion workshops and learned Afro-Venezuelan drums. He ultimately realized he wanted to expand his musicality, so he quit the orchestra and got a scholarship to attend the California Institute for the Arts, where he earned an MFA in jazz in 1991.

Eustache joined the AFM in 1992 at the suggestion of his colleagues. “For me, it has been literally a blessing for many things … it is an amazing blessing to have all the bonuses that we have, from the special payments to retirement,” he says. “If I were not, for example, a union member, I would not have been able to record with John Williams, as pragmatic as that. In LA, it’s a great blessing if you want to be a studio musician and be in the union. … every year when I get the special payments I go to my knees and I thank God for that.”

For Eustache, there is great pride in his union membership because it gives him validation. “As a professional, that for me is important, especially coming from another country,” he says. “When I joined in ’92 I felt like, ‘Oh man I’m legit, I’m official.’ It’s psychological, and it’s powerful.”

Just when Eustache arrived in the US, he and his wife suffered a tragedy when they lost their three-year-old daughter to brain cancer. “It’s one of those things that proved to me that my reality, my spiritual experience, was not just a figment of my imagination. I can tell anybody that God is real. I survived that. … I would not be alive if not for the grace of the reality of the power of the love of God,” he says.

After that tragedy, Eustache determined never to waste a minute of his life, and he emerged from that loss with a “laser-beam focus” to improve his music and his musical ability. But still, seven years later, although playing with various orchestras, traveling the world, he was still a struggling, financially poor musician. He and his wife lived in a trailer that had no air conditioning, among other hardships, and, he says, he wanted to give up—but his wife would not let him. “She said, God made you a musician, you’re going to make it.” A few months later, he received a call saying that world-renowned composer and keyboardist Yanni was looking for a flute player—and was interested in Eustache to fill the position. “That opened all the doors, for the studios, for everything,” Eustache says.

That was in 1995. Since then, Eustache has blazed an indefatigable musical trail across the world. For 11 years he was the featured winds soloist in Yanni’s band and has toured the globe playing solo flute with some of the world’s most renowned orchestras. He has collaborated with musicians such as Sir Paul McCartney, Don Henley (of Local 72-147, Dallas-Ft. Worth, TX), Armenian composer/keyboardist Ara Gevorgyan, and Indian luminary Anoushka Shankar. Eustache was the featured winds soloist on Ramin Djawadi’s/HBO’s “Game of Thrones – Live Music Experience” international tour and the featured winds soloist in “Hans Zimmer Live” world tour from 2017-19 (Hans Zimmer is also a member of Local 47), and a featured performer on Gustavo Dudamel’s “Libertador” orchestral suite, with the Los Angeles Philharmonic at the Hollywood Bowl. As a studio musician, Eustache has provided solo woodwind for video games and countless feature films.

While constantly performing, Eustache also never stops learning. He has studied the music and woodwind instruments from countries and cultures around the world, including:

In addition to playing hundreds of types of woodwind instruments, Eustache also collects them. His collection contains over 600 instruments, including more than 100 that he made or modified himself.

The secret to Eustache’s list of achievements, he says, is simply that he is a workaholic. “Constantly with me is the humility to know where I came from, and knowing how much I still have to learn,” he says.

While the coronavirus pandemic has stopped all travel and touring, Eustache has been busy practicing, playing, teaching, recording, researching, studying, and writing. He is currently at work on a book on how to compose cadenzas in the style of Mozart. Eustache is also studying musical phenomenology, which is, he explains, “going beyond the notes, beyond the sound, through the reality of living the right ways to exercise my craft so that it becomes an art.”

“Music is transcending through sound,” he says. “Sound, under certain circumstances, can become sonic art, thus becoming
a vehicle into transcendence.”

Pedro Eustache endorses an extensive and varied list of instruments and gear:

Club of the Knobs—Modular Synths 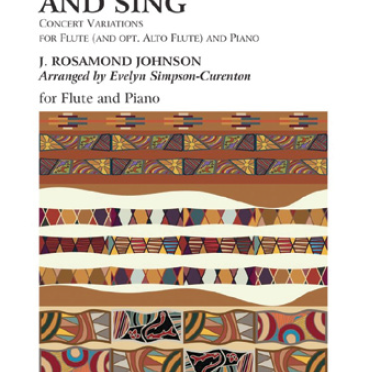 This poem, written in 1900 by James Weldon Johnson, was set to music by his brother, John Rosamond Johnson, five years later, and was soon adopted as the Black American National Anthem. Pianist and composer Evelyn Simpson-Curenton has arranged the piece with her own variations as a concert level entry for flute and piano. 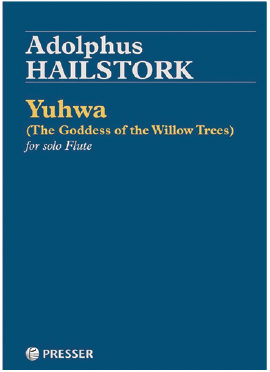 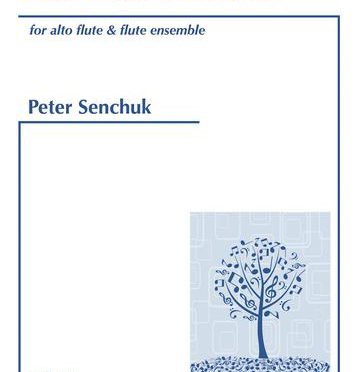 This three-movement work features different jazz styles in each movement. It opens with the up-tempo swing tune “Two-Hand Hot!” featuring intertwining solo lines for the entire quartet. “KB Blues” is a medium tempo blues piece with a classic style blues bass line and groovin’ melody with an improvised solo section for flute. The closing movement, “Irregular Swing,” is a fast swing tune reminiscent of bebop classics, but with changing time signatures that keep the players and audience on their toes.