At the Federal Communications Commission meeting being held on December 14th, FCC Chair Ajit Pai is expected to seek the repeal of almost all of the agency’s net neutrality regulations.

Current net neutrality regulations ensure that all web traffic is treated equally, effectively preventing Internet providers like Comcast, AT&T, and Verizon from blocking or throttling traffic. Public interest groups and Democratic lawmakers are sounding the alarm. Fight for Future is planning a protest at Verizon stores on December 7. 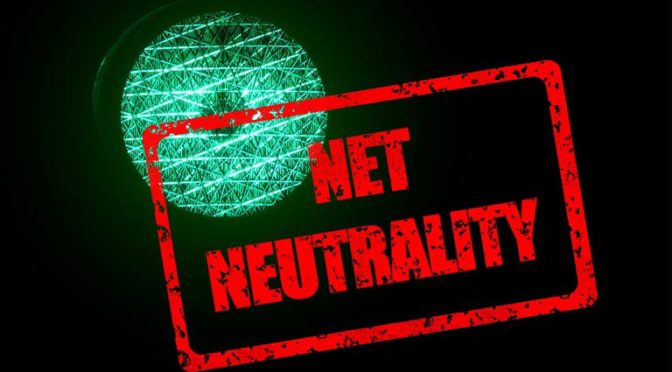 On December 14, 2017, the Republican majority at the Federal Communication Commission (FCC), led by FCC Chair Ajit Pai, voted to repeal Obama Administration net neutrality regulations put in place in 2015. The three to two vote was divided along party lines, approving a Trump Administration plan to repeal Obama-era net neutrality protections. Those rules were intended to keep the Internet open and fair—in essence treating all traffic the same, halting Internet service providers (ISPs) from speeding up or slowing down Internet traffic from select websites and apps. It also prevented ISPs from charging additional fees for users to access content.

Prior to the December vote, some members of Congress and others in opposition to the FCC move asked the FCC not to force a vote now, but to withhold it. Complaints from some members of Congress have centered on a corrupted comment system that has revealed at least a million comments may have fraudulently used the names of real people. Also, the Commission has not held public hearings on the repeal and some 50,000 consumer complaints have been excluded from the public record, as noted in a letter to Chair Pai from Senator Maggie Hassan (D-NH). Further, Representative Ted Lieu (D-CA) expressed concern that many of the fake submissions on net neutrality were linked to Russian email addresses.

Likewise, several attorneys general have threatened to file suit, including the New York Attorney General who is working on a criminal complaint. It is suspected that members of Congress who disagree with the changes will introduce legislation designed to block the new rules.

Under the new regulations, companies would be able to block, slow, or provide fast lanes to any service they so choose. This flies in the face of a free and open Internet concept that would give consumers the choice to access the content they desire on a free and open platform. It would grant ISPs the overarching responsibility to determine what the consumer can and cannot see.

There are competing legislative proposals on this issue, including Representative Marsha Blackburn’s (R-TN) BROWSER Act, or HR 2520, the Balancing the Rights of Web Surfers Equally and Responsibly Act. These proposals would require companies such as AT&T, Facebook, and Google, to get user permission before selling their Internet browser history.

Aside from some of the fundamental changes by the Republican majority on the Pai Commission that give clear advantage to tech companies, the AFM rejects the FCC’s recent changes because of limitations these new rules can possibly place on the free flow of music audio and music opinion content.

AFM International Vice President and President of Local 99 (Portland, OR) Bruce Fife, summarizes net neutrality and its meaning to our industry this way: “The concept of net neutrality is simple. It means that Internet service providers must treat all data the same. They can’t speed it up for some, slow it down for others, or even worse, block access to websites altogether. They need to treat everyone the same, which in our business, creates a level playing field for musicians working to market themselves, their performances, and their recordings.”

South Florida music critic Lawrence A. Johnson called the secret sale of three Classical South Florida (CSF) radio stations unconscionable and despicable. The stations were sold to a religious broadcaster who immediately switched them to a contemporary Christian format. Former station owner, the Minnesota-based American Public Media Group said the stations were losing money to the tune of $8.93 million in FY 2014. APMG executives were faulted for not announcing that the stations were up for sale, which would have allowed interested parties to buy the stations possibly organize financing to continue the classical format. In fact, Classical South Florida continued to fundraise and gather donations from classical music supporters even though the owners knew the station was close to being sold. Supporters of the former station are asking for an FCC investigation.

“This is a huge victory for Internet consumers and innovators! Starting Friday, there will be a referee on the field to keep the Internet fast, fair and open,” FCC chair Tom Wheeler said in a statement. “Blocking, throttling, pay-for-priority fast lanes and other efforts to come between consumers and the Internet are now things of the past. The rules also give broadband providers the certainty and economic incentive to build fast and competitive broadband networks.”