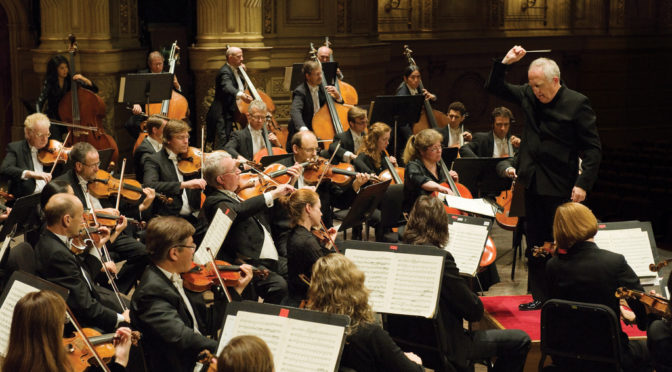 Globally, symphony orchestras have had to creatively engage with their communities and audiences in the past several years to increase their health and sustainability, and Canadian orchestras are no exception. These four orchestras from different regions of the country are trying new ways to communicate with and educate the younger generation, while they develop broader audiences across all age groups. These are examples of the kind of innovation being developed by many of today’s music organizations.

Vancouver Symphony Orchestra (VSO) in British Columbia has been extending its profile within the community and building new audiences with a busy and far-reaching summer season. Their yearly concert at Deer Lake Park in Burnaby is free to the public and attracts as many as 10,000 people each year. They also regularly perform at Bard on the Beach, an outdoor theatre festival.

Their most exciting new initiative is in Whistler, British Columbia. In summer 2013, they began performing free outdoor concerts at the Whistler Olympic Plaza. In 2014, they created the Vancouver Symphony Orchestral Institute. Run in conjunction with the concert series, it offers students aged 15 to 25 a once-in-a-lifetime comprehensive orchestral training program. The young musicians, who audition to take part, play in the Whistler Institute Orchestra, rehearse and perform chamber music, attend master and repertoire classes, and receive instrument-specific instruction from faculty. Student and faculty recitals, as well as a concert featuring the Whistler Institute Orchestra, are added to VSO concerts to create an exciting and diverse audience experience. This year students will perform Stravinsky’s The Rite of Spring and Don Juan, by Strauss, directed by VSO’s Maestro Bramwell Tovey.

Across the country, in Québec, the Orchestre Symphonique de Montréal (OSM) is planning the fifth season of its very popular La Virée Classique. The orchestra generally kicks off the event on a Wednesday night with a free concert that draws tens of thousands of people to the esplanade of the iconic Olympic Stadium. This year’s opening performance will feature excerpts from Gustav Holst’s The Planets, conducted by OSM Music Director Kent Nagano. In celebration of athletes from Canada and around the world who inspire us, 100 young Québec athletes will participate. In the four-day program renowned guest soloists will perform with the orchestra, as well as with OSM musicians in chamber music concerts.

The 2016 lineup comprises chamber music concerts, orchestra concerts, and many activities to interest and entice a wide range of audience members, including children. Last year children were treated to face painting and a make-your-own-instrument atelier. There are informal talks such as a Q&A corner with OSM musicians, conducting 101, and workshops featuring musicians and their instruments. This enormously popular festival takes over the whole of Place des Arts, with all five halls hosting concerts and special stages set up for various activities. Incredible momentum and excitement builds during the program. By the time the last note of the last concert is played, everyone is on a high! The concerts are priced accessibly at $10 to $40. This year’s 30 concerts, scheduled to run August 10-13, include 19 that are free.

The National Arts Centre Orchestra’s Alexander Shelley has been music director of this Ottawa orchestra since September 2015. One of his first initiatives was the commissioning and creation of Life Reflected, a multi-disciplinary piece blending music, literature, dance, photography, and film. Shelley, in researching the culture and history of our country, was inspired by the stories of four remarkable Canadian women, each determined to find her own voice despite extremely difficult circumstances. Creative Producer Donna Feore, who collaborated with Shelley for two years in the creation of this new work, was key to its successful production. The four women featured in the work are author Alice Munro, astronaut Roberta Bondar, poet Rita Joe, and the late Amanda Todd, a teen victim of cyberbullying.

All of the music was commissioned and written specifically for this project by four talented Canadian composers. All of the audiences’ senses are engaged with the inclusion of a live singer, several actors, dance on film, and graphic design elements, with the orchestra as a “character” in the piece. Included in the May premiere of the piece were apprentices of the Institute for Orchestra Studies, a program established by former NACO Music Director Pinchas Zukerman nine years ago to help prepare talented young musicians for successful careers.

Musicians of Orchestra London, in London, Ontario, have had a challenging two years. In December 2014, operations of the ensemble were shut down due to massive budget shortfalls, and in May 2015, the organization formally filed for bankruptcy. In spite of these setbacks, the musicians were able to self-organize and have continued to be creative in their ongoing efforts to promote their orchestra and classical music within their community, through collaboration with other local arts organizations, and performances in new and sometimes unusual places. They tweet and have a constant, and sometimes humorous, presence on Facebook, in addition to their website and blog.

In October 2015, the musicians invited Londoners to take part in an online survey as a way to engage the community in future planning and strategizing. In 2015,
#WePlayOn (former musicians of Orchestra London) performed more than 15 concerts to keep up their visibility and profile. These were planned entirely by the musicians and put on using private donations and ticket revenue, as well as donated services. They have honoured Orchestra London subscriber concert tickets for their performances in restaurants, churches, and high school auditoriums. As the musicians say on their website, they have “boldly and ambitiously played on” because they believe their community deserves a professional orchestra, performing live music, right there in London!

Two of London’s popular summer music festivals, Sunfest and Home County Folk, both held in London’s Victoria Park, included
#WePlayOn performances. (These are new opportunities for the musicians who, as Orchestra London, never had a summer season). The Sunfest website highlighted the commitment of the #WePlayOn musicians to “providing the people of London, Ontario, with music for all tastes, performed at the highest artistic level.” Their first concert of the 2015-2016 season was Beethoven’s 9th Symphony, with well-known conductor Bramwell Tovey, followed by a Messiah performance in December, and a collaborative Christmas concert with local Amabile boys’ and mens’ choirs. With the help of a grant from the City of London, the musicians were able to continue playing into the spring with five more concerts. These concerts featured eclectic programs with music ranging from the classic (Handel, and Haydn) to the popular (Music for Heart and Breath by Arcade Fire composer Richard Reed Parry).

#WePlayOn musicians have applied for a number of grants to allow them to begin planning their 2016-2017 season and to hire staff to take care of basic administration tasks. They have received charitable status as an organization, which will help with soliciting donations, and they are continuing to recruit new board members. The remarkable enthusiasm, energy, and creativity of the musicians have made it possible for them to continue to have a profile within their community and work towards re-establishing a permanent presence. The next crucial undertaking will be rebranding the orchestra; they hope to move on from the WePlayOn name in fall 2016. They can still be found on Twitter with #WePlayOn, or on Facebook and the web by searching “Musicians of Orchestra London.”

These four orchestras, like others across Canada, are exploring the impact of many kinds of performances and activities—presenting free concerts for thousands of people at a time, including children’s activities to introduce the “little ones” to the magic of sound, collaborating with local choirs and with young aspiring musicians, presenting workshops on specific instruments and conducting, and having active and engaging profiles on social media sites. These innovations will develop wider and more appreciative audiences and help to ensure continued viability within their communities.