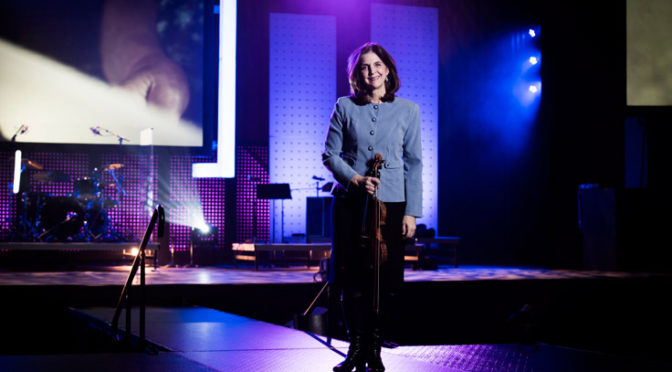 Ann Ourada Strubler of Local 5 (Detroit, MI) was born a musician. Barely four years old, she was already playing piano, but switched to violin, when it was discovered she had perfect pitch.

In high school Strubler attended Interlochen Arts Academy, in Michigan, from 1969-1971, which changed her life. She says, “I had hoped to be in a major orchestra and Interlochen gave me the confidence I needed.” She entered the New England Conservatory and went on to Boston University for a master’s in violin performance, studying with Joseph Silverstein, in her view, the “king of the concert masters.” 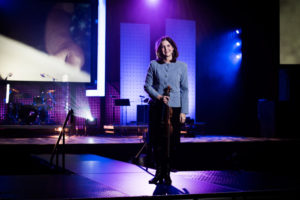 But it was only when she was well into her career that she realized musical talent is, in fact, in her genes. Strubler, who retired from the Detroit Symphony Orchestra after 30 years as a violinist, was adopted when she was 10 days old so she never knew musical lineage.

Her three sons, all natural musicians, found their various niches in music and composing. Strubler’s son, Michael, was inspired to write a film about his mother’s adoption and subsequent search for her birth parents. For years he had observed his parents’ advocacy work in the community in support of adoption. Michael says, “When she told her story, I saw how it affected everyone in the audience. They were very moved by it. I started talking with my parents about more details, what really happened. I’m just amazed that this is part of my own history.”

The Tapestry: A Musician’s Journey, by Michael Strubler, who also wrote the score, will premiere in November on Detroit Public Television. Woven into the tale of Ann, her family, including her father, mother, and birth parents, is a narrative of how adoption changes lives—the sad, authentic, and ultimately joyful way it became a story of rescuing the past. Along the way, you meet her birth mother, a girl from the Midwest just starting out and the handsome Bostonian she met in Miami who played in jazz ensembles and composed big-band pieces, who vowed to marry her. In between, various relatives are introduced, from an uncle who studied at Berklee (like Ann’s eldest son, Mark) to a grandfather who played in the Chicago Symphony and the popular Sousa Band. In the end, for the Strublers, it all adds up to a rather remarkable musical legacy.

Thanks to the way her parents embraced it—five out of six siblings were adopted—Strubler was always very proud of being adopted. She says, “I felt chosen, special. I had a very close relationship with my mom, until her death at 59 of ovarian cancer. I had just gotten into the Detroit Symphony, and she died less than a year later, in 1981.” She says, “I always had a fervent desire to share in a positive way being adopted. I was grateful. Nobody has a perfect life, but I knew this was where I was supposed to be.”

She began speaking publicly about her experiences. At a fundraiser for a local crisis pregnancy center a young woman approached her. “After my talk, she came up to me and said, ‘I gave up my baby daughter when I was 17, but I always worried that she would hate or resent me for the decision I made.’ I was stunned. I never had feelings like that for my own birth mother. So that’s when I started contemplating these things in my own life. Who wouldn’t want to know about their background? But you don’t go there as an adopted person. I didn’t,” Strubler says.

Strubler’s husband, David, an educator, approaches it from a “nature or nurture” perspective.” He explains, “Adoption nurtures the nature. That’s exactly what happened to Ann. She was born with perfect pitch, musical talent, just like our sons. But had it not been nurtured, from the age of three by her parents, she might not have pursued music.”

She felt compelled to convey a positive message to her birth mother. First, Strubler had to be at peace with the decision, no matter what emerged. She says, “I wasn’t looking for medical records, I wasn’t looking for an identity, and I wasn’t looking for a mother.” She imagined every possible scenario, and asked her father how he would feel. “I tell people not to have expectations and know that you could continue on in life with your head held high.”

In 1986, she made contact with her birth mother in California through the adoption agency, and over the years they developed a relationship. It was not until 2006 that she tracked down her birth father in Boston. He, too, became part of the extended family. A few years later, he attended his grandson Mark’s graduation from Berklee. “We have his upright bass he gave our sons,” Strubler says. From her birth mother, she has her grandfather’s violin.

When Strubler joined the DSO in 1980, she was one of 13 women in the orchestra. She felt lucky to have secured a position—and luckier to be part of the AFM. Strubler says, “It’s made symphony orchestras what they are today. Before laws, there was no protection, no help, and no advocacy. There weren’t clear lines of delineation to protect the orchestra. Once you’re in a symphony orchestra, they’re your advocate,” she says.

A November 20 presentation of the film at Detroit’s Orchestra Hall will feature a prelude by the Detroit Symphony Youth Orchestra.

The 30-minute documentary will be followed by Matthew Strubler’s, “The Tapestry: A Symphonic Poem,” featuring an ensemble of DSO musicians. The concert is presented in partnership with Spaulding for Children, an adoption agency for placement of children with special needs.

Both the documentary and symphonic poem, featuring members of the Detroit Symphony Orchestra and Detroit Symphony Youth Orchestra, will be webcast by Detroit Public Television at 3 p.m., November 20, in celebration of National Adoption Month. The Strublers view this concert as a way to integrate the arts into the community to support a cause.

David Strubler says, “We hope orchestras and other musical groups across the country find similar ways to engage and collaborate in
the community.”