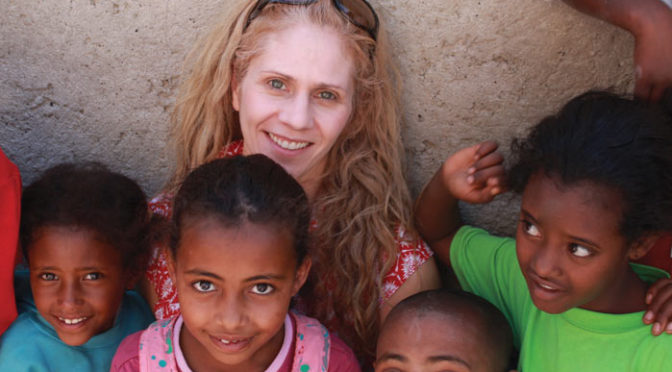 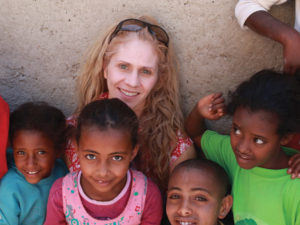 Anja Wood, cellist for the Broadway show Hamilton and a member of Local 802 (New York City), founded her own charity to help Ethiopian families overcome poverty.

When Anja Wood of Local 802 (New York City) graduated from the Cleveland Institute of Music in the early 1990s, she headed east to carve out a life as a freelance musician. A classical cellist armed with a master’s degree, she easily settled into a tidy routine of playing in regional orchestras and touring Japan during the summer with conductor Mamoru Takahara (also of Local 802) and the New York Symphonic Ensemble.

“I lived like a pauper with little gigs here and there, and eventually worked my way up,” she says. Wood joined the union in 1997 when she first started subbing on Broadway.

In 2014, Wood received a call from musical director Alex Lacamoire of Local 802, who asked her to join the orchestra of the Broadway hit, Hamilton. It was the same creative team that produced In the Heights. Wood says, “It was exactly what I’d been wanting to do for years,” adding, “It was long before we knew what Hamilton would be. We knew people would react well. We just didn’t know it would be this juggernaut success.”

They play eight shows a week, but the union contract allows the orchestra musicians to take off four days a week and still maintain their contract. Wood says, “The brilliance of that is we can go and play another gig, and a friend and colleague whom we trust and love can come and play the show for us, and is happy to have the work. It’s a great system for musicians in New York.”

In a different role, a world away from New York City and Broadway, Wood serves as president of the Lelt Foundation, a nonprofit organization that helps severely impoverished Ethiopian orphans and families. It began in 2009, when she and her husband began the adoption process for their second daughter from Ethiopia. Amid agency-wide and embassy delays, Wood says that their daughter, who should have already been in the States, was still in Ethiopia five months after she was legally theirs.

Taking a leave from work, she traveled to Addis Ababa to take custody. In Ethiopia, they stayed with her friend, the late Carrie Neel-Parker, who also adopted a daughter from Ethiopia. While visiting state-run orphanages, many in grave disrepair, they realized that some basic, inexpensive upgrades could vastly improve living conditions for the children. With the help of friends back in the US, who chipped in about $30 each, they were able to provide 250 girls in Kechene Orphanage with mattresses and linens, plus repair the crumbling outer compound security wall.

Wood initiated a music program at the Kolfe Boys Orphanage, where an instructor comes in twice a week to teach students electric piano, bass, and electric guitar. She felt confident that the efforts made in just a couple of months would give way to more initiatives. “Our daughters gave us this gift of having Ethiopian families and we wanted to continue to give back to those we now consider our family,” she says.

Back home she filed for nonprofit status, formed a board of directors together with Neel-Parker, and the Lelt Foundation was born. Its focus: nutrition, education, and job creation programs for very impoverished neighborhoods. “Our whole mission is to help people so they won’t need us in a few years,” Wood says. “People graduate from the program with assistance we give them—it’s a hand-up, not a handout.”

A partnership with the Ethiopian government helps the organization identify the most impoverished families in the region. Lelt pays the fee for their children’s public school education, about $2.50 a year, and gives them a daily nutritious lunch and after-school tutoring. Families are provided counseling and job creation services, monthly food rations, and household necessities.

In just six years, Lelt has built a community center, and homes for girls and boys, which are refuges for children who are abandoned or severely abused. A dedicated staff in Ethiopia, managed by a husband and wife team (called Mommy and Poppy by the children) live on site, in the compound. “This team is deeply committed to the community. This is their mission. It’s what they want to die doing,” Wood says.

Lelt conducts seminars on money and business management skills, providing micro loans to families to launch their businesses—a “jumpstart to financial independence,” says Wood. “The kids are in school, moms have just started a small business, like vegetable wholesale at the local market or bread baking. Once they get started, we usually see graduation from the program about three years later.”

Investing in music education is a natural component of Lelt’s mission. In addition to Western instruments—keyboards and guitars—students learn to play the traditional instruments of Ethiopia, including the masinko (an ancient violin), the krar (a lyre-shaped guitar), and traditional drums. Traditional folk music is important to Ethiopians, Wood explains. It is what folk music might be to people who grew up in the Blue Ridge Mountains. “Everybody has a grandparent, an aunt, or uncle who plays an instrument, and the children want to learn, too.”

In the music community Wood has found many on-and-off Broadway friends and donors who support her work. “In fact, 20% of the people who sponsor children in the organization are musician colleagues,” she says. “They are by no means wealthy, but loyal and compassionate humans who want to contribute in some way.”

Now, a busy mother, managing daily operations and directing the foundation’s fundraising efforts, Wood says, “Playing a show is the easiest part of my day. I get to go off and be my adult self and who I’m trained to be. I have a few hours of easy peace and artistic expression.”

Working with fellow pit musicians in Hamilton, Wood says, “I love knowing this group really well. I love coming in and knowing exactly where I’m going to put my F# in ‘Right Hand Man’ because my quartet is sitting right next to me. I know exactly where the first violinist is going to use less vibrato for emphasis and I’m going to match him. I know where we’ll sit behind the beat on ‘Room Where It Happens’ because I’ve learned this band so well—and that to me is exciting. We’re making this music as perfect as possible.”

For more information on the Lelt Foundation and to make a donation, visit www.leltfoundation.org.