Whether you’re a wind instrumentalist or singer, you have probably heard the phrase “use your diaphragm” many times throughout the course of your career from teachers and fellow musicians. This instruction concerns the constant flow of air supported by the group of muscles that musicians and singers employ for optimal sound in their performances. To support air flow, singers and instrumentalists use forced inspiration and forced expiration of breath, essentially turning the human body into an air pump.

How It Works
Air pumps, like the human respiratory system, draw in air from the atmosphere and expel it into a container such as a balloon. The human trunk is divided into two large cavities, the thoracic cavity, which contains the lungs and heart, and the abdominal cavity, which contains the stomach and intestines. The diaphragm, a large dome-shaped muscle, separates these two cavities.

Using forced inspiration, the musician’s diaphragm lowers the floor of the thoracic cavity, while increasing the volume inside the cavity. At the same time the muscles between the ribs (external intercostals) elevate the rib cage. The dual action enlarges the thoracic cavity, sucking air into the tiny alveoli sacks filling the lungs with air—think of the action of an air pump with the diaphragm as the plunger.

At this point in the breathing process, the musician or singer is ready to force air through the mouthpiece or vocal cords. The human girdle (made up of the transversalis abdominis, external and internal oblique muscles) now forces the stomach and intestines against the lateral side of the diaphragm. This reduces the size of the thoracic cavity. Simultaneously, the internal intercostals (musculature between the ribs) lower the ribs, reducing the size of the rib cage. This joint action is similar to squeezing your hands together forcing the air out of a balloon.

Capabilities
The volume of air used for forced inspiration and forced expiration, is known as the musician’s vital capacity. This volume, measuring in cubic centimeters (cc), varies from clarinet player to tuba player or rock singer to opera star. Females generally average 3,000 cc of lung capacity and males 5,000 cc. Variations in vital capacity between individuals or across the sexes does not seem to hinder performance levels. However, a musician’s height, weight, and age can affect vital capacity. It is the general opinion of the medical community that regular physical exercise increases vital capacity. Forced inspiration and forced expiration, as used by wind musicians, increases the capacity. This exercise of the lungs increases oxygen in the blood stream, blows off carbon dioxide, and is a contributing factor to the health of the musician.

Avoiding Improper Technique
When the diaphragm is used correctly, the abdomen will project forward or push out, while the musicians inhales. A “heaving chest” occurs when a musician or singer fails to use the diaphragm properly. It is a sign that the diaphragm is not being used to full capacity since the breath will jerk the rib cage upwards instead of expanding the stomach. While this heaving action makes it possible for the musician to achieve some degree of vital capacity, there is a major problem with this type of breathing. The external intercostals, in between the ribs, are acting on their own and cannot achieve the airflow required for maximum musical performance. A formula for the proper muscle use in inhaling and exhaling might read as follows:

Practice breathing, separate from when you are rehearsing music, to accustom the body to correct breathing for optimal performance. 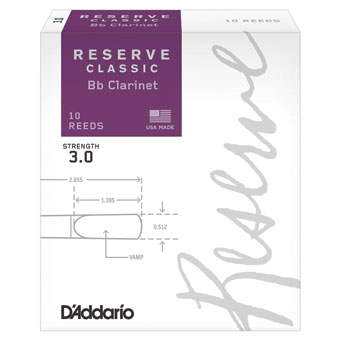 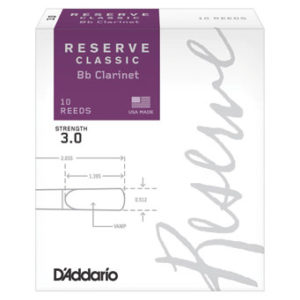 D’Addario’s Reserve reeds utilize the first practical and precise system for digitally measuring and cutting reeds to exact specifications to provide unparalleled consistency box to box. Reserve for clarinet is built on a standard thickness blank and features a shorter vamp for even sound, rounded tip corners for warmth, traditional thickness, and in strengths from 2.0-4.5, and a special 3.0+ strength. Reserve Classic clarinet reeds are built on a thicker blank, with a longer vamp for increased flexibility, squared tip corners for ease of response, and a thicker tip, in half-strengths from 2.0 to 4.5, with special 3.5+ and 4.0+ strengths. Reserve Alto Sax reeds feature a traditional blank option, heavy spine for dynamic flexibility, fine narrow rail for consistent response, traditional tip thickness, and half-strengths from 2.0-4.5 and special 3.0+ strength.