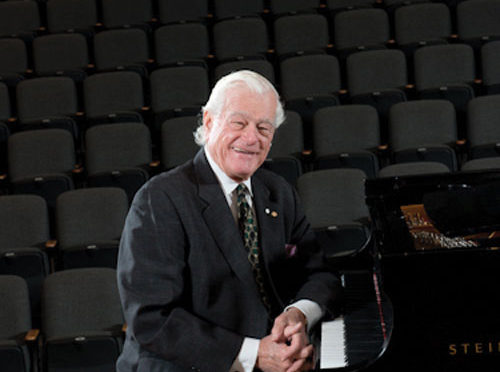 The following excerpts are from a longer tribute written by E. Eddy Bayens, President of Local 390 (Edmonton, AB) 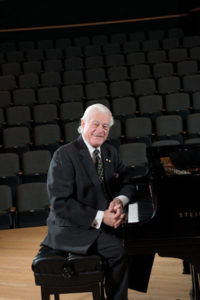 On January 25 we suffered the great loss of Tommy Banks at 81 years old. He was a close friend and I find it difficult to sufficiently honour him.

We had at least one thing in common, at age 14, we each chose music as our careers, ignoring wise advice to the contrary. He quit high school so “his playing would not be contaminated by the ravages of higher learning,” as he explained. Few people are as gifted as Tommy. He had an insatiably curious mind that appeared to absorb, process, and instantaneously retain information. That allowed him to productively participate in discussions about an astonishingly wide range of subjects. He was an extremely perceptive listener and made every person feel comfortable and important.

Born in Calgary, his parents moved to Edmonton in his early teens. Word quickly got around about this piano playing kid who seemed to know all the tunes ever written. Too restless to be a sideman, he formed his own band, Tommy Banks and The Banknotes. He got involved in all aspects of the music business: arranger, composer, record producer, promoter, philanthropist, and more. Through it all, he remained a decent, humble guy, who would always make time to listen, especially to musicians who needed help, providing constructive musical leadership.

Many of Tommy’s activities could potentially have put him “on the other side of the table” from the AFM, as an engager of musicians, but his mantra was: “If it is in the interest of the musicians, that is the right thing to do.” All his engagements went by the book. No membership card? No gig.

He and his band spent enough time on the road and in the “big places” to appreciate making a living at home in Edmonton. Alberta and Canada reaped the benefits.

Edmonton had an active jazz scene thanks to Tommy’s Yardbird Suite Jazz Club. In spite of various invitations to relocate, he stayed in Edmonton, playing in his own club, The Embers. As a result, many outstanding musicians remained in town and others moved to Edmonton to work with him.

When the Canadian Broadcasting Corporation needed a host for a nightly talk show, they asked Tommy. He insisted the show be produced in Edmonton and that he lead his own band. The Tommy Banks Show lasted 13 years. Later, Tommy convinced the owner of the Edmonton ITV station to produce the In Concert Series, backed up by various ensembles and recorded before a live audience at Jubilee Auditorium. The 36 shows presented an awesome array of soloists.

Tommy could play and write in any style. He fixed the music for Gretzky’s wedding, the Pope’s visit, the Universiade, Commonwealth Games, royal visits, and the Winter Olympics. There appeared to be no limit to his creativity, stamina, and focus.

As head of the music department at MacEwan University, he insisted that, to be successful in music, you must consider yourself a tradesman. He would say, “You have to have plan A, the artistic side, and plan B, the business side, and be able to satisfy the demands of the marketplace.”

Tom was instrumental in building the Winspear Centre for Music, home of the Edmonton Symphony. He also created the Alberta Foundation for the Arts in conjunction with the Alberta government and looked after the musical requirements of the Citadel Theatre for many years. In recognition of his many contributions to music and to society, he received a number of awards, Gemini, Juno, the Queen’s Diamond Jubilee Medal, University of Alberta Dr. of Law, and Officer of the Order of Canada status.

In 2000, he was appointed a senator, quite a remarkable achievement for a piano playing, high school dropout. As a senator, he served on prominent committees for 11 years. He influenced government decisions regarding arts funding, taxation, and transport issues until mandatory retirement at 75. As a senator, he eloquently addressed an AFM Convention some years ago. He left us a better world; it is now up to us.

On behalf of musicians everywhere, we offer our respectful condolences to Tommy Banks’ family. Wherever musicians go after they die, we may take comfort from the assurance that this gentle genius is now busy writing great charts, and looking after player interests. First, take a well-deserved rest, my friend.