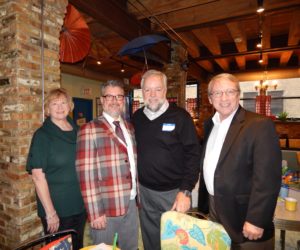 On Saturday, January 9, AFM Director of Touring, Theater and Immigration Services Michael Manley hosted the AFM’s first Theatre Musicians Summit, geared toward local and traveling theatre musician concerns. With several touring and local productions clustered in Chicago, the Windy City seemed a great testing-ground for this first brainstorming seminar. Local Chicago theatre musicians performing a pre-Broadway run of Gotta Dance at the Bank of America Theatre joined touring and local musicians from the productions Beautiful: The Carol King Story at the Oriental Theater, and The Lion King at the Cadillac Palace Theatre. Members of the Chicago Theatre Musicians Association (TMA) chapter were also invited to attend. Approximately 25 theater musicians participated, along with the officers of the Chicago Federation of Musicians, Local 10-208.

Theater Musicians Association (TMA) President Tom Mendel gave a warm welcome and spoke about the TMA’s role in the upcoming AFM negotiations. Local 10-208 President Gary Matts, Vice President Terry Jares, and Secretary Leo Murphy shared a historical overview of the Chicago Federation of Musicians, from the years in the Petrillo Building at 175 W. Washington, with its bullet-proof glass, to the new location in Haymarket Square at 656 W. Randolph. This historic site saw the Haymarket Riot of 1886 that gave laborers an eight-hour work day. Lively stories were told of the leadership of James Petrillo in both the CFM and the AFM.

Afterward, the group broke into small focus groups to discuss the challenges and opportunities for professional theatre musicians today. Identified concerns and recommendations were then discussed and distilled. This information will be used to inform the AFM’s upcoming Pamphlet B negotiations, and inform long-term AFM strategies for championing live music in live theatre. This was the first AFM-sponsored summit of theater musicians, and there was great interest from everyone participating to continue these meetings in the future.