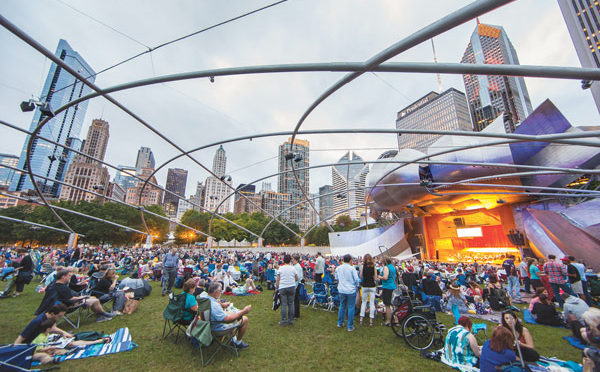 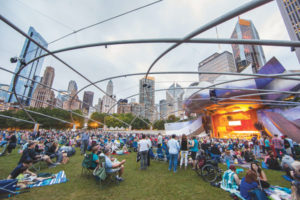 MPTF is a sponsor of Chicago’s annual Stars of Lyric Opera, performed at Millennium Park and free to the public.

Now a joyous end of summer musical tradition in downtown Chicago, the Stars of Lyric Opera annual free concert got its start at the turn of the new millennium. In early 2000, Lyric Opera of Chicago announced that it would present its first-ever free outdoor concert the Saturday after Labor Day, in Grant Park. That inaugural concert featured stars of the coming season performing with the Lyric Opera Orchestra and Chorus, which was conducted by Maestro Bruno Bartoletti.

“For some time, Mayor Richard M. Daley has been hopeful that Lyric Opera could present a free concert, and we are delighted that we are finally able to do so,” said William Mason, Lyric Opera’s general director at the time. “Thanks to a grant from the recording industry Music Performance Trust Fund, which was arranged by the Chicago Federation of Musicians [Local 10-208], it is now financially possible for us to bring the Chicago public a free concert.”

Lyric’s free preseason concert premiered September 9, 2000, attracting an audience of more than 20,000. It was presented in cooperation with Grant Park Music Festival, the Mayor’s Office of Special Events, and the Department of Cultural Affairs.

“In his dual role as trustee and chief executive of both the MPTF and the Film Fund from 1992 until 2013, John C. Hall, Jr., was instrumental in launching these concerts in tandem with Lyric Opera of Chicago,” Cernota notes. “This is a perfect example of how, by providing generous seed money to cover the Lyric Opera Orchestra compensation, the Trust Fund created an ongoing annual series of Chicago concerts that are free and open to the public. These performances stimulate audience members to become subscribers and regular ticket purchasers to Lyric Opera of Chicago.”

Subsequent to the inaugural Stars of Lyric Opera concert in 2000, a number of foundation and corporate sponsors have generously subsidized these free performances over the years, with continuous support from the MPTF. Lyric Opera Orchestra musicians are members of Local 10-208. 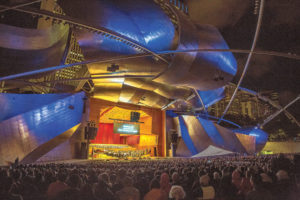 The Stars of Lyric Opera at Millennium Park free concert features artists from Lyric’s upcoming season, along with the Lyric Opera Chorus and Orchestra, members of Local 10-208 (Chicago, IL).

After a one-year hiatus for Lyric’s heavily-scheduled 50th anniversary season in 2004-2005, the concerts moved to the “new jewel in the crown of Chicago,” Cernota adds, and was renamed the Stars of Lyric Opera at Millennium Park free concerts. Performances take place in the Jay Pritzker Pavilion, designed by Frank Gehry.

Since 2007, the annual performance has been broadcast live on 98.7WFMT, Chicago’s classical music radio station. Beginning in 2010, the Stars of Lyric Opera at Millennium Park has also been live streamed on www.WFMT.com. Says Cernota, “As a gift to the City of Chicago and the world at large, the Lyric Opera Orchestra and Chorus allow free live radio broadcasts of these performances on WFMT.”

The Stars of Lyric Opera at Millennium Park concert Friday, September 8, 2017, will be led by Sir Andrew Davis, Lyric’s music director and principal conductor since 2000, who has led most of these free performances. Artists from Lyric’s upcoming 63rd season, along with the Lyric Opera Orchestra and Chorus, will perform highlights from several of the season’s featured operas.

What a wonderful way to end the summer while building excitement for a new opera season!