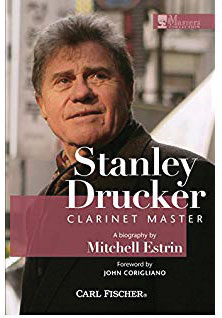 Stanley Drucker of Local 802 (New York City), who retired from the New York Philharmonic in 2009, is recognized by Guinness World Records for the longest career as a clarinetist. For 61 years, he has performed and collaborated with virtually every major conductor and concert artist of his time. In this biography, written by fellow clarinetist and Local 802 member Mitchell Estrin, his fascinating story is told for the first time.