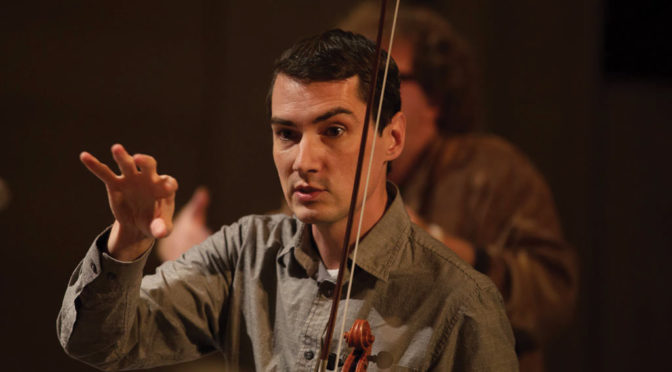 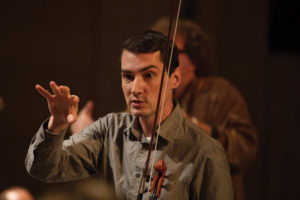 For his first CD, Breaking Through, Paul Henning of Local 47 (Los Angeles, CA) made sure it was done on a Limited Pressing Agreement with a live 48-piece orchestra. A string section, woodwinds, horns, and percussionists formed the all-union ensemble. A mix of Celtic folk melodies and lush orchestration, the album was inspired by Henning’s excursions to the Pacific Northwest.

Henning grew up near Pullman, Washington, on his family’s wheat farm. He’s played piano since the age of eight and began playing violin as a teenager. Well into his first year at Washington State University, he was interested in civil engineering and architecture. A musician friend convinced him to take some music courses, and he ended up graduating with a degree in music composition. In 1999 he attended the one-year film scoring program at the University of Southern California, Los Angeles, where he studied with late film scorers Elmer Bernstein and David Raksin.

Henning joined the union in 2000 when he was attending recording sessions for James Newton Howard, also of Local 47. In addition to orchestrating and proofreading scores, he was asked to do session work. The union’s established wages safeguard a career, plus he says, the steady stream of royalties offer financial stability.

In addition to studio work for TV, Henning has worked on orchestrations for more than 50 feature film scores, including The BFG, Night at the Museum: Secret of the Tomb, and Chocolat.

Etching out a score can be a solitary activity so Henning welcomes the variety union work offers. Playing for the Hollywood Studio Symphony, he has performed on the soundtracks for Moana, Storks, Furious 7, Frozen, X-Men: Days of Future Past, The Maze Runner, Monsters University, and Alice in Wonderland. His violin session work has included performances with Barbra Streisand, Michael Bublé of Local 145 (Vancouver, BC), Neil Young of Local 47, Aretha Franklin, Andrea Bocelli, and Josh Groban, also of Local 47. He says, “It’s a totally different challenge to show up at a recording session and be able to sight read the music in front of you.”

Since 2004, Henning has been concertmaster for the Golden State Pops. “We play a lot of film music in the orchestra and it was one of the ways I met a lot of film composers, orchestrators, and conductors. They’d guest-conduct or be in the audience. They started asking me to play on their film scores. It was one of the ways I got into playing in sessions,” he explains.

Henning owes much to mentors like Patrick Russ of Local 47, the orchestrator for Maurice Jarre who wrote the music for Lawrence of Arabia and Doctor Zhivago. “I met Pat early on and he took me under his wing. I called him up out of the blue and told him I was interested in orchestrating, and he met with me. I started proofreading scores for him and eventually I was working with him all the time. He got me started in orchestration,” says Henning.

Henning has also worked with John Williams of Local 47 and Local 9-535 (Boston, MA). “His sketches are extremely detailed, and he does everything by hand. It’s an interesting challenge putting together scores by someone so incredibly intelligent and at a genius level musically,” says Henning, who worked on Star Wars: The Force Awakens. “He is an inspiration all the time. You’re hoping that some of it will rub off on you musically and professionally.”