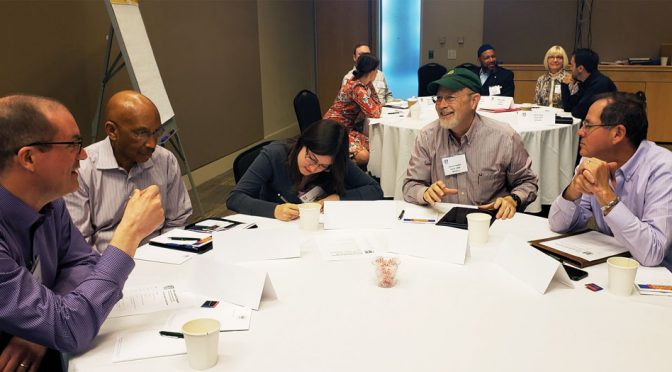 Beginning in the fall of 2016, the AFM launched a comprehensive local officer training program—the first of its kind in several years—under the guidance of the AFM’s Education Committee (currently comprising International Vice President Bruce Fife, Vice President from Canada Alan Willaert, International Executive Board Member Tina Morrison, Director of Symphonic Services/Assistant to the President/Special Counsel Rochelle Skolnick, Assistant to the President Ken Shirk, and Director of the Organizing and Education Division Michael Manley). While much of the training focused on nuts-and-bolts content that every local officer needs to succeed, the three-day retreat is geared toward leadership development, organizing fundamentals, identifying local organizing targets, and building musician worker-leaders.

“While the IEB had been discussing an officer training program for some time, it was a resolution from the Canadian Conference at the 2016 convention that pushed it forward,” explains Fife. “President Ray Hair put me in charge of the education committee, and together, we developed all the components of the program, including the twice-a-year, three-day training. I believe the organizing and strategic planning training that we present there is critical to how we, as a union, approach growth in both membership and workplace campaigns.”

On April 28, the fifth “class” of AFM local officers, staff, and musician leaders—19 in all—made their way to the Tommy Douglas Center in Silver Spring, Maryland. Coming from as far away as Orange County, California, and Saskatoon, Saskatchewan, these musician leaders settled in for three days of intensive and active learning from AFM and AFL-CIO Organizing Institute staff. Beginning on day one with an AFM “History Game” and ending three days later with work plans for specific local organizing projects, the current Leadership Development Program—like a well-prepared performance—is the product of a lot of offstage planning, trial-and-error, and plain hard work.

Building a Program to Build a Movement

The initial three-day retreats were centered on labor history, leadership skill-building, and high-level problem-solving. “While the first two rounds of our program covered a lot of ground, we felt like we could do more—especially around organizing and building other leaders,” says Manley. “This is really core to being a labor leader. We wanted this learning to be really dynamic and interactive as well.”

In looking to inject these key elements into the curriculum, the AFM turned to the AFL-CIO’s Organizing Institute (OI) staff for help. “Going through my first OI three-day training, I was really impressed by the work of OI staff Tiffany Bender and Patricia Recinos,” Manley adds. “I knew we had to reach out to the Organizing Institute to help us build the program we needed.”

Under the guidance of Organizing Institute Director Patrick Scott, AFL-CIO OI staffers Bender and TJ Marsallo worked closely with Manley and Fife to construct a dynamic three-day training with a greater organizing focus. This was no small feat; while the OI has many detailed scenarios that are ready-made for their own trainings, they are focused on non-musical workplaces such as hospitals, schools, or retail stores. While the key points and principles are the same regardless of the workplace, the team agreed that AFM attendees would best learn from tools that were specific to musician workplaces. Thinking there would be no better place to start than at one of our own locals, this team of AFM and OI staff met with Ed Malaga (president, Local 161-710) and Marta Bradley (secretary-treasurer, Local 161-710) for an in-depth conversation about their own work and the working lives of DC musicians. The recent opening of a major gaming resort in the DC metro area provided a perfect model from which to draw.

The results are two detailed organizing project scenarios—one a symphony orchestra, the other a casino resort—from which participant teams must build organizing campaigns.

“The work that the AFL-CIO Organizing Institute and the AFM have been doing together to create and run this training program is really based in the fundamentals of good organizing,” says Marsallo. “We’ve developed training around recruiting and developing leaders and building organizing committees. This required a strong focus on the one-on-one organizing conversation, as well as charting and mapping non-union workplaces and groups.”

“These are skills are the foundation of successful organizing, whether with a group of musicians or anyone else,” Marsallo continues. “It has been a rewarding experience for us to work with the AFM on this project, and it’s been great to see so many local union leaders investing their time to learn new skills and techniques that will help build the organizing capacity of the AFM.”

In addition to the active role AFM staff played in designing the program, they realized they needed to be active in the teaching process as well. At the latest training, Alex Tindal Wiesendanger, who came on staff as the AFM’s international lead organizer in January, joined Manley and Fife in co-teaching the program with Marsallo.

Nearly 80 AFM leaders have gone through the program so far, including local officers, board members, member leaders, and AFM staff. “We felt it was really important for this learning to be embraced by everyone, even key AFM staff,” says Manley. “Many challenges local officers ask us for help on—member apathy or low membership, a plan of attack for a contract campaign or non-union workplace, unionizing freelance musicians and clubs, or a lack of new leaders to take over from retiring officers—ultimately, these are all organizing challenges.”

From Transaction to Transformation

A major goal of the training is to change how we view our union, seeing it not as a third-party service provider (or worse, dues collector)—a favorite tactic of anti-union bosses is to portray us like that, by the way—but rather as a movement of working musicians building collective power to win fair treatment and respect in every workplace.

“I was really challenged to flip my script, from thanking musicians for paying their dues and completing transactions to a much deeper and transformational conversation,” says Local 7 (Orange County, CA) Secretary Tammy Noreyko. “It’s changed the way I approach everything I do now!”

Local 174-496 (New Orleans, LA) member Roderick Paulin has been shining a light on the issues facing jazz and club musicians in the Big Easy. “I realized that the issues we face as New Orleans musicians are the same that others are facing; we are not alone in our fight,” he says. “I also learned that having an organizing conversation, while challenging, is really the key to moving people to take action. Folks have made a lot of noise in my community about unfair treatment, but making a clear organizing plan showed me how I can truly make an impact locally. I feel much more confident, comfortable, and clear about the work we need to do in New Orleans.”

Local 7 (Orange County, CA) Vice President Edmund Velasco shared his take-away: “I learned things I didn’t know I had to learn. Knowing that you have to really get another person’s story to find out what moves them to action—that was great. If we allow workers to tell their story, then get them to face their fears, we can help them motivate themselves into action.”

AFM staff graduates had their own points of discovery as well. “I had a light bulb moment during our group discussion about dues, when it finally occurred to me that we pay dues not ‘to the union’ but to each other, as a tangible marker of our commitment to each other,” says Skolnick. “We pay dues so that we, the collective, have the resources to support each other.”

Richard Sandals, associate director, Symphonic Services, Canada, realized he would have to change his game in his own staff work. “Because I work for the AFM’s Canadian Office and not a local, my assumption was that this training would give me some tools that might be useful now and then,” he says. “What I hadn’t expected was that the underlying ideas we explored would shake up my whole concept of how I do my job. Working for members is very rewarding, but working with members is even better. And building solidarity and a sense of common purpose shouldn’t stop the moment people sign their cards. Instead of telling people what they get if they sign up, we should ask them what they want and help them go get it!”

“What I learned was how to take big organizing projects—which can seem overwhelming—and break them down into winnable chunks,” says Local 149 (Toronto, ON) Executive Director Michael Murray. After attending the December 2018 training, he realized that his local needed more resources to tackle the important work. Local 149 then brought on two staff organizers, who are currently building a theater campaign.

Key to the training is that participants identify and craft a plan to tackle a real-world target in their own locals. A follow-up team then tracks the progress of each participant and target and provides guidance. International Representatives Allistair Elliott and Dave Shelton join Wiesendanger, Manley, and Symphonic Services’ Organizer/Negotiator Todd Jelen in forming this follow-up team. Projects so far include non-union orchestras, theaters, clubs and showrooms, and even churches.

Just as a conductor can’t do her job without an orchestra, organizing doesn’t work with just one leader. While focused on local officers, the program has recently welcomed board members and musician leaders as well. The complaint of “I’m only one person—I can’t do it all!” is, of course, true, and the answer to this is: “You’re right—now who’s with you?” From building a committee to organizing a non-union workplace to having a succession plan for retiring local officers, the need to identify and develop new leaders is constant.