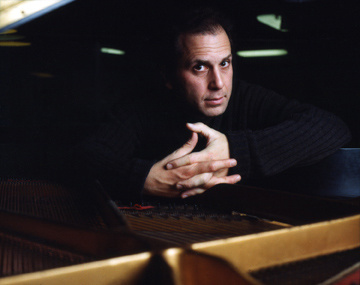 Grammy-nominated pianist and composer Larry Goldings has had an amazing and stylistically eclectic career—from 20 years recording and touring with James Taylor, to numerous artistic collaborations that straddle the realms of jazz and pop, to scoring music for television and motion pictures. But Goldings’ recent project, scoring the Netflix series, Self-Made: Inspired by the Life of Madam C.J. Walker, has been not only the biggest project he’s ever done, but also one of the most meaningful.

Goldings, of Local 47 (Los Angeles, CA), started playing the piano by ear at age 10. By 12, he says, “my ear was interested in harmony,” and he discovered jazz, which he calls his “first love.” He went to college at the New School in New York City, which had just started a new jazz program. “I very quickly found some good luck and starting working around town as a sideman,” he says. He joined Local 802 (New York City) not only because he found it essential in order to work, but because the older, more experienced musicians he was playing with told him it would be smart for his future. “It quickly became apparent to me how necessary and beneficial it was for me to join,” he says. “Our union is a support system that musicians need, especially now when we are all just trying to figure out what our futures will look like. Our rights need to be protected. It’s still a chaotic time in terms of how we make a living: How do we get fair compensation? How are our rights protected? How as musicians do we tackle our needs for health care, security, and all that? I don’t think there’s ever been a more challenging time.”

Throughout the 1990s, Goldings played New York City and toured the world with an impressive and eclectic array of artists. His musical inspirations draw from a lifetime of absorbing jazz, pop, funk, R&B, electronic, and classical music, and he has done numerous long-term collaborations that straddle the realms of jazz and pop with such artists as Maceo Parker (Local 47), John Scofield (Local 802), Steve Gadd (Local 802), Pat Metheny (Local 34-627 – Kansas City, MO), John Mayer (Local 47), and others. In 2000, Goldings received a call from James Taylor’s producer, asking him to play on Taylor’s (a member of Local 802) new record and join him on the road.
“That was the beginning of my stint with James Taylor, and it’s still ongoing—or would be if not for the pandemic,” Goldings says. “As a pianist, there’s a lot for me to do with James; he’s a unique and brilliant person. I grew up listening to him, so it’s kind of a great dream come true, and I couldn’t think of a more interesting, humble person to work for, particularly someone who’s as iconic as he is.”

All of these professional experiences led to others for Goldings: songwriting, co-writing, forming his own trio, and recording. He moved to LA in 2001 (where he became a member of Local 47) with the idea to break into Hollywood, see if he enjoyed it, and, hopefully, to be home more and take a break from being on the road. He has since worked on numerous movie and television soundtracks (including with Local 47 member Clint Eastwood and his film Space Cowboys), and underscoring stories for NPR’s “This American Life.” But Goldings discovered he was actually doing about the same amount of roadwork, because, after all, “it’s hard to turn down James Taylor,” he says with a laugh.

All of these experiences led to one of the biggest projects in Goldings’ career: scoring the Netflix series, Self-Made: Inspired by the Life of Madam C.J. Walker. The series, which first aired on March 20, chronicles the incredible story of Madam C.J. Walker, who built a haircare empire for African-Americans that made her America’s first female self-made millionaire.

“I really loved the experience of Self-Made, partly because it took place in the early 1900s and allowed me to use my jazz knowledge to approach it,” he says. However, he wanted to make sure he got the history of the period correct and the sound authentic, so he hired two musicians with whom he had not previously worked who were knowledgeable about the music of the time period: brass player Dan Weinstein and drummer Jay Bellerose, both of Local 47.

“The next challenge was: What’s going to be the sound of the film?” Goldings says. “I felt the project needed reminders of the era but not a straightforward jazz score. That wouldn’t have served it deeply enough for all the different emotional places that this series goes.” Ultimately, he says, there were two “hybrid” musical sounds he was trying to inject into the show, using either jazz instrumentation or jazz harmonies and melding those with the licensed music from modern artists the producers were also using in the show. Goldings’ score ultimately infused the drama with shades of ragtime and early jazz, in combination with modern, back-beat oriented cues, in which early jazz meets hip-hop. “It ended up pretty much the way I was imagining it, some kind of hybrid sound,” he says.

While Self-Made came out months before the Black Lives Matter movement and accompanying protests occurred, Netflix has put the series in the “Black Lives Matter” category on the site. “It’s a story a lot of people didn’t know about, including myself,” Goldings says. “It’s an incredible story, and it’s self-explanatory how important it is. I am so thrilled I was able to be involved in something so meaningful.”