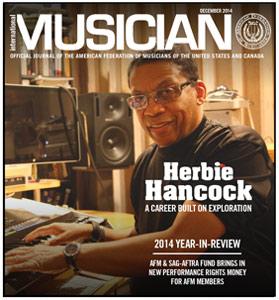 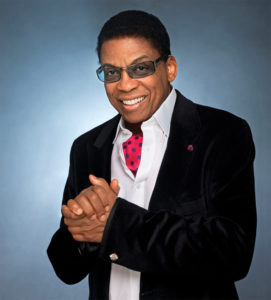 Iconic keyboardist and composer Herbie Hancock of Local 802 (New York City) is a living legend. The list of artists he’s performed with, from Miles Davis to Quincy Jones to Joni Mitchell, almost seems endless. Throughout his career, he’s eagerly embraced new technology while steadily expanding his own musical focus. His recordings have won him 14 Grammy Awards. Hancock’s latest project, the book Possibilities (Penguin Group, 2014), looks back on his five-decade career.

As a child, Hancock was so drawn to a neighbor’s piano that his mother bought him an old church piano for about $5. Soon after, the seven-year-old began classical lessons. “Playing music changed everything about my life,” says the musician who had early aspirations of being a concert pianist.

His focus was altered in high school when he saw one of his classmates playing jazz. “I was fascinated by the fact that this guy, who was about my age, could improvise,” says Hancock, who followed him backstage after the show to ask the guy how he could learn. He told Hancock to buy some George Shearing records, find phrases he liked, and then learn what they are and how to play them.
END_OF_DOCUMENT_TOKEN_TO_BE_REPLACED