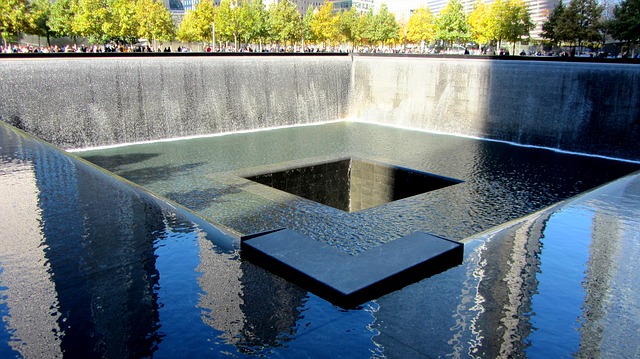 Note: This is a reprint of an article I wrote as President of Local 72-147 (Dallas-Fort Worth, TX) for our local newsletter 14 years ago—three weeks after the 9/11 disaster.

My travel to New York City to attend the October 3 opening of the AFM’s Pamphlet B negotiations had assumed an entirely different demeanor in the aftermath of the 9/11  attack.

The plane from DFW to La Guardia, a Boeing 757, was only 25% full. During the usual pre-takeoff announcements, the flight attendant stated: “failure to comply with crew member instructions is a federal crime.” I had never heard that before. I wondered if the plane had a sky marshal, and if so, where that marshal might be.

Three hours later, as the plane descended toward the city, we flew over the southeast corner of Manhattan and on over Long Island. After recognizing the familiar outlines of the Statue of Liberty and the Empire State Building, I looked to find Ground Zero from among the infinite jungle of skyscrapers as did everyone else. We could not see it.

On the ground, at La Guardia, customer density mirrored that of DFW, it was amazingly slow.

I was one of only two passengers on the airport bus from La Guardia to the Port Authority terminal. Before the bus entered the Midtown Tunnel, we slowed for the “checkpoint” but avoided the long line of cars being searched. We proceeded on, arriving at 42nd Street after a short 15-minute ride from the airport. It was definitely not the city I remembered.

I had clear and vivid memories of the city, and particularly the Times Square and Midtown Manhattan areas from the numerous trips I had made over the years as an AFM officer. I remember the energy and the dynamic of the town. On my way from the hotel to Local 802 (New York City) that afternoon, I could feel the change in vibe.

There was an overwhelming sense of sadness. Walking past FDNY Ladder Company Number 54, located at 48th Street and 8th Avenue, a block away from Local 802, I was struck cold by the array of flower arrangements, cards, signs, photos, and other memorials left by a grieving public in memory of the 14 union firefighters from that firehouse alone who had given their lives to save the thousands who escaped the Twin Towers disaster.

The executive board of Local 72-147 had convened the night before, on October 1, and resolved to donate $1,000 to Local 802’s relief fund to help members adversely affected by the tragedy. I met with the Local 802 board that afternoon and presented the donation.

Broadway theater musicians, in concert with union actors and stagehands, had voluntarily reduced their salaries by 25% in order to keep the houses from going dark. The reductions would last for four weeks. Two shows—Blast and Rocky Horror Picture Show—had closed.

“We were massacred,” said one musician, referring to the September 11 attack. I was beginning to understand the depth of the anger and depression that gripped the city, but it was not until I saw the remnants of the carnage itself that I was able to approach any sense or comprehension of the horror of it.

Local 5 (Detroit, MI) President Gordon Stump and I decided to try to visit Ground Zero on Wednesday, October 3, after the conclusion of the opening day of negotiations. “Take us as far as you can to Ground Zero,” I told the cab driver. We proceeded south a good long way until I could see what would be the first checkpoint that marked the 12-block perimeter.

Thick with US Marshals, State Police, and NYPD officers, the checkpoint stopped all traffic, letting through only residents, property owners, or employees. Gordon and I walked into a world that resembled an episode of The Outer Limits.

No traffic, no noise, very little pedestrian activity, people wearing masks to help them breathe, others with breathing apparatus hanging around their necks, who had obviously been working near the site.

It was an eerie scene. After we walked another six blocks or so, we came upon another series of checkpoints across which we could not pass. From there, we stood in silence and looked down the final four blocks to Ground Zero.

None of the photos or TV images could impart the graphic horror of the destruction that lay there in that place. The debris mound was several stories tall, from which the large cranes were removing smoldering rubble. The charred hull of one of the towers stood as a backdrop to the thousands of tons of wreckage. There, as we stood frozen and speechless, President Bush’s motorcade exited from a side street and sped away.

We had been there about 15 minutes when I noticed that I had begun to cough. Gordon’s eyes were burning. The air was a mix of smoke and dust, with a noticeable odor of concrete.

On the A train back to Times Square, I could overhear the residents talking with each other in snippets about the tragedy—discussions about friends who were still missing, what they had done, and where they had been to help. People were doing what they could to deal with their personal losses. You could see in their eyes the look of folks who had been forever changed. You could also see and feel their spirit and determination to rise above the sorrow.

That spirit and determination of the people of New York City is what I brought back from the opening meetings of our Pamphlet B negotiations, which will continue for quite some time. The employers have informed us that technology has recently become available that can almost perfectly replicate the sounds of an accompanying pit orchestra for the production of theatrical musicals. The Broadway League suggested that the technology would be used to break any impasse in the negotiations.

“We don’t need you,” said the League employers, referring to our attempts to blunt their efforts to impose reduced orchestrations with fewer musicians in major markets. Their attitude was more than cold. More like subzero.

Those employers, like the board of directors of The Dallas Opera, shamelessly used the events of September 11 to adopt a conservative economic stance toward professional musicians who bring such joy into the world, and at a time when the public needs it the most.

“We are all here because music has brought us here,” I told the employers on the third day of the Pamphlet B sessions, “and music is about man’s inhumanity to man. You have a responsibility to protect the livelihood of those of us who create it,” I said.

There are lessons to be learned from the resilient human spirit we see today in New York City, and that exists everywhere in this great country. “Triumph over tragedy” and “victory in the face of adversity” have been recurrent themes since the first caveman whittled a song flute from the carcass of a dead antelope.

Our music contains that spirit. It is what saves us.

Despite such coldness, we will find that spirit, as we always do, as we confront the producers and employers in New York City and here at home in Dallas-Fort Worth.