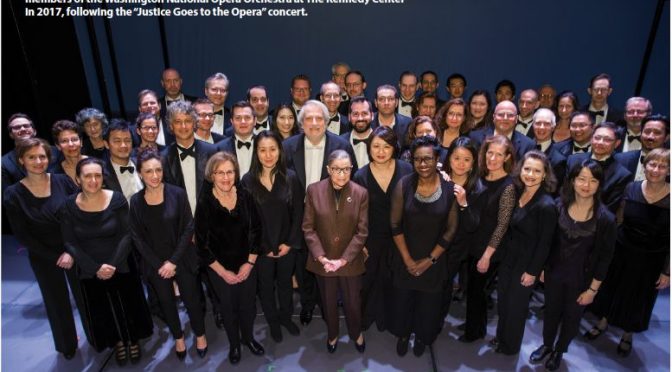 As our nation and the world mourn the passing of Associate Justice of the US Supreme Court Ruth Bader Ginsburg, untold numbers of vocalists, conductors, instrumentalists, opera companies, and premier musical organizations around the world—including but not limited to the Washington National Opera, Metropolitan Opera, Glimmerglass, and the Los Angeles Opera—sang her praises as a true advocate of the art form. With her passing goes an era of measured comity that this iconic jurist brought to a divided court, a court that now faces the expectancy (as of this writing in mid-October) of an almost permanent lean to the right as the White House, along with Senate Democrats and Republicans, jockey over when and how to best to fill her seat.

For arts in the United States, one would not have expected to lose such a staunch supporter of American culture from the seldom-engaged judicial branch of our federal government. But, the loss of Ginsburg has indeed resonated among those of us in the music industry who constantly look for Americans of great stature to help validate our existence. And that’s exactly what Justice Ginsburg did. Her unyielding support of music and the operatic art form, from her early days as a young cellist to her sage days as a federal jurist, was underscored by her love of music, specifically opera, and the world-class artists who brought these masterful tales to life—so much so that the comic opera Ginsburg/Scalia was composed in her honor by Harvard-educated composer and librettist Derrick Wang. Ginsburg was selected by the Washington National Opera to play the opening night speaking role of the Duchess of Krakenthorp in Gaetano Donizetti’s La Fille du Regiment (Daughter of the Regiment) at The Kennedy Center. Aside from being a regular patron of the company, Ginsburg had also served as a supernumerary.

Throughout her legal career, and especially while on the Supreme Court bench, she was heralded as an unparalleled champion of women’s rights and equal justice.

Justice Ginsburg’s love of the arts was cherished by the Washington, DC and national opera community as she often was given a standing ovation while trying to inconspicuously enter The Kennedy Center Opera House Theater, only to be recognized by adoring patrons. Her love of music not only extended to the cello as a young girl, but carried over into her adult life as she went out of her way to graciously endear herself to instrumentalists of The Kennedy Center Opera House Orchestra, all members of AFM Local 161-710 (Washington, DC). Douglas Rosenthal, assistant principal trombone of the orchestra and a member of the local’s board of directors, noted in her honor, “My partner Garrett Law (member of Local 70-558, Omaha, NE) and I brought a white rose, taped to the final two pages of the score from Richard Wagner’s Ring Cycle, the series of four operas that culminates in the world being saved by a woman (and delivered it to her public memorial). ‘Only a woman could do it; only a woman could change the course of history,’ Justice Ginsburg said of the Ring Cycle. And now, that is what we say of her.”

With Ginsburg’s passing, the battle to fill her seat became mired in political skullduggery as was expressed in the October 8 vice presidential debate and the ongoing political discourse that followed. The question for Democrats was whether the White House and the current Republican-led Senate would move to fill the vacancy before the November 3 presidential election or, for Republicans, if Democrats win and take over the Senate and the White House, will they “pack the court” (add additional justices to the nine member panel)? Should President Trump’s nominee, Amy Coney Barrett, be installed before the election? There is no doubt that Barrett’s conservative placement on the court could dramatically change the ideological political balance cementing a 6-3 conservative advantage, as these lifetime appointments would certainly create a new, decades-long era of conservative decision-making. Such a court would then be poised to possibly overturn Roe v. Wade, the Affordable Care Act, and could even play a role in deciding the 2020 presidential election should that process have to be decided by the Supreme Court.

Just before passing, Ginsburg’s dying wish was not to fill her seat before the election. But that matter unfortunately was out of her hands as the political wheels in this highly contested 2020 election refuse to stop turning. May she find peace as many continue to support her legacy and the ideals she stood for.

US Supreme Court Associate Justice Ruth Bader Ginsburg, center front, with members of the Washington National Opera Orchestra at The Kennedy Center in 2017, following the “Justice Goes to the Opera” concert.