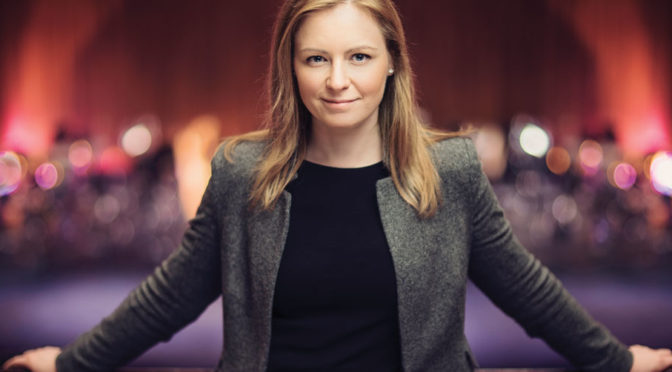 New Zealanders are known for their “big OEs” (overseas experiences), but Conductor Gemma New has taken that tradition to the extreme. Her positions as music director for Hamilton Philharmonic Orchestra in Ontario and resident conductor for the St. Louis Symphony Orchestra mean she almost always has a bag packed during the concert season. And then there are her many guest conducting engagements. She says she’ll find herself in at least two different cities just about every week this year.

Even in the off-season she earns her miles. In Lausanne, Switzerland, in June, she conducted the Orchestre de Chambre de Lausanne. Then, she spent about two months as a conducting fellow at the Tanglewood Music Center. “I conducted in the weekly symphonic and ensemble programs and I was mentored by conductors such as Andris Nelsons and Herbert Blomstedt,” she says. She also fit in guest conducting with the Chautauqua Symphony Orchestra and the Grant Park Symphony, and back in St. Louis, she held auditions for the youth orchestra and conducted some summer pops programs.

“As New Zealanders, it’s part of our culture to have an OE, especially just after graduating high school. We travel a lot as a nation,” she says. “When I guest conduct in Europe, the United States, or Canada, I often meet Kiwi musicians who I was in National Youth Orchestra with.”

New thrives on these engagements. “I love getting to know an orchestra and working on this beautiful music with them. To work with the orchestra is always a joy—it’s a great week!” she says.

Concertmasters are key in helping the process along, she explains. “They give me insight into the orchestra and help with communication. My job is to bring people together with a unified interpretation and to create an environment where everyone is comfortable. It’s always a musical conversation—listening to what the orchestra has to give. It’s a real pleasure to have that two-way conversation.”

New, who describes herself as highly prepared and a calm leader, says, “The first rehearsal I take quite a bit of my focus into listening to the orchestra and what they are giving; that helps me figure out a plan for the rest of the week. At rehearsal every second is accounted for. It’s a creative challenge.”

To connect with an orchestra, she tries to relay her authentic enthusiasm. “When you conduct you should be genuine about yourself and relaxed and enthusiastic about the task at hand. It’s all about a team working towards a project,” she says, adding that nervous energy plays no role. “If you are nervous and have fears, that takes part of your focus away from the group; that’s extra noise, that’s a negative.”

New’s career grew out of her childhood passion for orchestra and watching her conductors as a youth orchestra concertmaster. “I became absolutely fascinated with the orchestra and playing within this immense sound; being part of a team in achieving something that no one can do by themselves,” she says. “In my youth orchestra, we had three conductors and each of them was very different in how they led the orchestra. I became fascinated with how the orchestra reacted to their leadership and what made them uniquely different.”

She recalls first deciding she wanted a career in music at age 12 when she was part of a program combining two youth orchestras. “There were more than 200 of us on stage. I was so inspired. That’s when I realized that I wanted to be part of this for the rest of my life,” she says.

“Three years later, I got the chance to conduct for the first time and that’s when [my career path] fell into place for me,” she says. “I felt very comfortable and I had a deep curiosity for music as a whole—how it’s constructed, how we come together to bring a unified interpretation. I felt like I had these kernels of strengths that fit with what a conductor needs to do and I was excited to improve and hone in on those things. I was eager to get to know all this music and understand it on a holistic level and to physically join with the musicians’ sound.”

Among those conducting strengths, New says, “I think a conductor needs to be a great musician, a great communicator, and a great leader. And every musician needs to be creative, curious, and open-minded and always wanting to learn more.”

Over the next few years of high school she had opportunities to conduct various groups. “I asked people for advice and then I moved to Christchurch and went to university there,” she says. Eventually, she got the job conducting the youth orchestra and assistant conducting the Christchurch Symphony.

New graduated with a Bachelor of Music (Honors) in violin performance from the University of Canterbury. She also earned her master’s degree in orchestral conducting from the Peabody Institute in Baltimore. She was a Dudamel Conducting Fellow with the Los Angeles Philharmonic, among other fellowships.

When she took the position as music director for Hamilton Philharmonic she was happy to join Local 293 (Hamilton, ON). New says it is “very important” for musicians to join together in union for mutual support in the workplace.

Throughout her career, New has continued to work with various youth groups, including in L.A. She’s involved with Hamilton Philharmonic Youth Orchestra, Hamilton’s Young Musicians Boot Camps, and is music director of the St. Louis Symphony Youth Orchestra.

“I am passionate about young people playing together in orchestras and I love being a part of it every single time. When I work with young musicians I see their passion, enthusiasm, and dedication to performing music together. I love to see how they grow from the very first week until the last week of our year; it’s incredible progress and very inspiring,” she says.

“I think it’s very important for a young person to learn an instrument and to play with others. It brings certain skills that maybe, combined, cannot be learned with anything else. Music gives us work ethic, dedication, commitment, team-building, and leadership, as well as listening skills. It gives us a chance to express ourselves without using our voice—to be creative and emotional.”

New also enjoys mentoring young conductors. “When we have the opportunity, we do a conducting workshop with the orchestra so anyone who wants to conduct can get to know what it’s like to be on the podium,” she says. “Also, the other musicians find it interesting to learn how the conductor communicates with the orchestra.”

Instead of a challenge, New sees her responsibilities with Hamilton Philharmonic and St. Louis Symphony—which are 700 miles apart—as complementary positions. She says, “I love that I get to work with these two orchestras so regularly and I get to learn the inside story.”

“As music director of the Hamilton Philharmonic I am responsible for the artistic vision of the orchestra,” she explains. “I am part of the programming for the entire season. I conduct the majority of the programs and I create them in conjunction with the committee and guest conductors. I am part of the panel for auditions, as well as development and marketing. The Hamilton Philharmonic is such a superb orchestra. I love working with each and every one of the musicians, staff, and board.”

“For St. Louis, I will conduct two of their subscription programs this year, and I do movies, holiday programs, pops, education and family programs, and new music programs—a wide range of repertoire. It keeps me on my toes and creative and the orchestra is fantastic. They are so open about sharing their experience with me and so supportive of my growth as a conductor and musician.”

Just looking at next month’s agenda, she’ll have her New York Philharmonic debut in November. Then there’s a partnership with the St. Louis Symphony performing new works from composers studying at University of Missouri (Mizzou) School of Music and the film Nightmare Before Christmas. “We also have a partnership with St. Louis University for their anniversary and a youth orchestra concert. And that’s just for St. Louis Symphony,” she says.

“For Hamilton, we have one of our main stage concerts, “From Broadway to Tin Pan Alley,” with Doug LaBrecque, which I will be conducting. I will be guest conducting Jacksonville Symphony in “A French Fantasy”—a beautiful program of French music,” she says.

“The rest of the season is equally demanding,” says New. She has engagements with Toronto and Detroit symphonies, as well as Brandenburgisches Staatsorchester in Frankfurt, Germany, to name just a few.

“I look forward to all of those events and I really want to make sure that every single thing I do I love, and that I bring as much energy and enthusiasm as possible. I don’t want anything to be less exciting than the next,” she says. “Every piece that I’m currently working on is my favorite piece at the moment. I love every kind of music and I just want to find all the gems in the music to enjoy.”