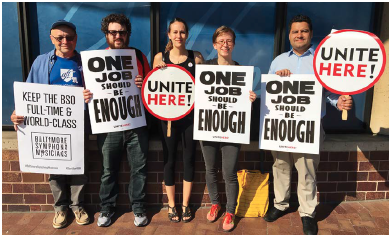 As Baltimore Symphony Musicians continued to picket Joseph Meyerhoff Symphony Hall, emails released pursuant to a Freedom of Information Act request revealed Baltimore Symphony Orchestra (BSO) management attempted to influence Maryland Governor Larry Hogan to attach to any release of state funds a message supporting the management bargaining position seeking drastic cuts in musician compensation. As reported by the Baltimore Sun on July 16, these messages also show BSO management painting a very dark picture of the organization’s finances to the governor’s office, suggesting that management might have privately undermined public efforts then underway by the musicians and their supporters to get the governor to release to the BSO $1.6 million in funding authorized by the state legislature.

The emails show that BSO CEO Peter Kjome believed, as early as May 23, that the funds would not be released, although Gov. Hogan did not announce his decision until July 3. On that same day, BSO musicians continued a 40-plus-year tradition of playing a Fourth of July concert at Oregon Ridge Park, having assumed responsibility for the event after BSO management canceled the orchestra’s summer season on May 30. In conjunction with Baltimore County government, the musicians obtained grants from the Music Performance Trust Fund and Film Funds to present this live, free performance. This year’s concert was conducted by Amarillo Symphony Orchestra Music Director Jacomo Bairos.

The musicians, members of Local 40-543 (Baltimore, MD), are routinely joined on the picket line by the orchestra’s subscribers and donors, members of other AFM locals, and members of other unions, such as the International Alliance of Theatrical Stage Employees (IATSE), the International Brotherhood of Electrical Workers (IBEW), the Baltimore Teachers Union (BTU), the United Food and Commercial Workers International Union (UFCW), the American Federation of Teachers (AFT), UNITE HERE, the American Guild of Musical Artists (AGMA), the American Federation of State, County and Municipal Employees (AFSCME), National Nurses United (NNU), and the Baltimore and Maryland State AFL-CIO leadership.

On June 24, former BSO Music Director David Zinman and his wife Mary visited the picket line, as did former International Conference of Symphony Musicians (ICSOM) Chair Bruce Ridge. “I was shocked, mortified, and horrified to hear what was happening,” Zinman said. “It pains me to see this.” Among his remarks, Ridge observed, “What happens to one of us happens to all of us.”

A number of BSO musicians have been hired to play in other orchestras’ summer seasons and in summer festivals. The musicians remaining in Baltimore are busy playing home concerts and other types of performances to raise awareness and money for their fight for a fair contract. Baltimore Symphony Musicians took part in a rally on July 20 at Johns Hopkins Hospital in support of nurses engaged in an organizing drive.

Support for the Baltimore Symphony Musicians and the Musicians’ Association of Metropolitan Baltimore continues to flood in from orchestra musicians and AFM locals across the country. ICSOM has announced that over a quarter of a million dollars has been raised since their Call to Action was announced at the AFM Convention in June.

At its annual gala in September, the Baltimore Symphony Orchestra (BSO) announced that it received a $6 million endowment gift from the Zanvyl and Isabelle Krieger Fund—its largest gift in recent years. The gift will establish the Zanvyl and Isabelle Krieger Fund for Education as part of BSO’s endowment, and will support BSO programs for Baltimore City school students.

The gift has a long history: It was pledged in 1996, in the form of a life insurance policy purchased on Robert I. Hiller, the former president of the Krieger Fund. Hiller passed away in May at age 93.

On April 29, as Baltimore was reeling from riots gripping the city, musicians of the Baltimore Symphony Orchestra (BSO) gathered to do what they do best: play music.

The idea for a gathering of musicians came to BSO oboist Michael Lisicky of Local 40-543 (Baltimore, MD) while he was sitting in a coffee shop the day after the riots broke out. Everything fell into place in less than 24 hours. “Originally I envisioned some unannounced chamber music outside the hall to whoever was around,” he says. “I didn’t want to call it a ‘performance’ because it wasn’t about us. The city was very damaged, emotionally and physically.”

Lisicky pitched the idea to his fellow musicians and many quickly came on board, agreeing to donate their time. BSO management joined in the effort, arranging logistical details, preparing sheet music, and working on publicity for the impromptu musical offering.

The next day at noon, the BSO musicians played the National Anthem, and Baltimore’s city anthem, Handel’s Music for the Royal Fireworks, Bach’s Orchestral Suite No. 3, and the finale from Beethoven’s Symphony No. 2 conducted by Music Director and Local 802 (New York City) member Marin Alsop, outside of Meyerhoff Symphony Hall. A crowd of 1,000 people joined to listen, including media outlets from around the world.

The music uplifted spirits and demonstrated the power and purpose that a symphony orchestra can provide during times of struggle. “It blossomed into a great thing,” says Lisicky. “Playing Bach and Beethoven was what we could do, and it worked. It showed that we are part of the community, and it showed that we are professionals.”

BSO’s scheduled education concert took place the day after the gathering. While the hall was mostly empty due to safety concerns, the music was streamed live into classrooms under the terms of the Integrated Media Agreement.

Baltimore Symphony Orchestra gathered data for classical performances by 21 major American orchestras on the 2014-2015 season and uncovered some interesting statistics.

Those orchestras will perform 1,000 different pieces by 286 different composers for a total of almost 4,600 times. The average year of composition for the pieces is 1886, and only 9.5% were written after the start of the new millennium. Only 1.8% of the works come from female composers and American composers make up less than 11% of the pieces. One out of eight performances feature pieces by Beethoven (317 performances) or Mozart (313 performances). John Adams is the most performed living composer (35 performances). Around 11% of the compositions are from composers who are still living, 14.8% of them women and 54% of them Americans.