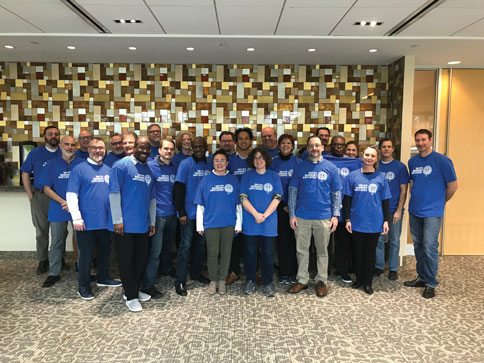 by Nicole Bogatz, Assistant to the Trustee of Local 433 (Austin, TX)

My colleague, fellow Local 433 (Austin, TX) member Aaron Lack and I hopped on a plane to Washington, DC, at the beginning of December. We were headed to American Federation of Musicians Leadership Training. The AFM hosted the three days of training with leaders from the AFL-CIO Organizing Institute at the Tommy Douglas Conference Center in Silver Spring, Maryland. We knew that these intensive sessions would be beneficial to the Austin Federation of Musicians (Local 433), our membership, and the Austin community.

The words of the week were: organizing, transactional, and transformational. These words were daunting the first day. Organizing is arranging into a structured whole. Transactional is when leaders are aware of the link between the effort and the reward. Transactions are activities leaders must do to get them checked off a list. Transformational activities cause changes in individuals and systems. When leaders inspire emotions in their members, they motivate the membership to act beyond the framework of transactional necessities. Every local must complete transactional duties to keep the office running, but providing the transformational experiences within its membership sets the groundwork for effective organizing.

The training tempo was brisk due to the variety of learning activities provided. Local leaders formed new groups or partnered for each training exercise. This allowed us to work with other AFM leaders that we might not typically have the opportunity to work with. Group and partner work enabled networking and the exchange of experiences between all of us. Role playing skits gave each of us a laugh, but provided a safe practice space before heading home.

Bringing It All Together

The “Organizing Conversation” handout that I have deemed “my new best friend” really brought the meaning of the word organizing into focus. Everything we had been learning during training started to click.

On the last day, we watched the video 1,000 People in the Street: 5th Ave. Musicians Strike, featuring Local 76-493 (Seattle, WA). This provided a real-life example of how transformational activities support organizing and how organizing can change a mindset, and in turn, create results. All of these training activities helped me. At first, I felt a little overwhelmed by the loaded word “organizing.” By the end of the training, the words that once terrified me were now powerful tools for my jurisdiction.

By the end of the training, I had three main takeaways: 1) Organizing is the key to any local’s success for its members and community; 2) We as the local leaders must first help to internally organize, if we want to make future changes to our community and beyond; 3) Don’t “third-party” the union; we are all the union, an organized group of musicians and music industry professionals who stand together, united for the greater good of the industry and of our craft.

Local 257 (Nashville, TN) Secretary-Treasurer Vince Santoro had the best quote: “‘Right to work’ is a label for a mindset.” Let that sink in, repeat it to yourself, and don’t let it deter you from your goals. Any local, big or small, can always make an impact and bring change to its community.

The AFM & AFL-CIO Leadership Program is a valuable training session. Not only did I access a wealth of information and ideas to bring back to my local, but I feel more confident in my ability to assist our members in any campaign they would like to start. I also feel ready to take on any collective bargaining negotiations that may arise in our jurisdiction.

I would like to thank AFM Organizing and Education Director Michael Manley, Lead Organizer Alex Tindal Wiesendanger, Symphonic Services Division Negotiator/Organizer/Educator Todd Jelen, Vice President and Local 99 (Portland, OR) President Bruce Fife, as well as AFL-CIO Organizers T. J. Marsallo and Patrick Scott, for their hard work putting this training together. There was a lot of information to put into just three days of training, but you all pulled it off. To my fellow attendees, it was great seeing familiar faces and meeting new ones. It’s time to get organized!

The last six months have been a very busy time for me. In addition to the work of running a mid-sized local and my duties as AFM International Vice President, the AFM initiated its new Officer Training program that I worked with others to create. Training has taken place in King of Prussia, Pennsylvania; Madison, Wisconsin; Orlando, Florida; Chicago, Illinois; and Hamilton, Ontario, Canada. In addition to those training sessions, I also attended the Regional Orchestra Players Association (ROPA) and International Conference of Symphony and Opera Musicians (ICSOM) conferences. Through all of this work, there developed a theme that I felt was worth sharing. This has been an important time for revitalization and regeneration at multiple levels of the AFM. Let me explain.

Starting with the Officer Training program, it has been years since the AFM had such a program in place. The work that local officers do is complicated, time intensive, and never ending. Combined with the fact that there are not many “kudos” and pay is not what it should be, you have a recipe for burnout. That said, those who take on these local leadership positions, do so for the good of all. It’s truly a calling for the best of those officers and their commitment cannot be underappreciated.

As we’ve gone through each of our training sessions, the feedback has been almost universally positive. It’s not just what officers learn from staff and trainers, but what they learn from each other, as well. As they grow their relationships, they have new allies to contact when there are problems to discuss or for cross collaboration between locals. For those officers who have been in place for a while, there is a sense of regeneration and rededication to their duties. For those who are new to their positions, they now know where to turn for answers and support. It’s exciting to feel the energy and see the interaction and relationships that build during these two or three-day sessions.

Moving to ROPA and ICSOM, both of those conferences have new leadership at the top and this was their first round of conferences. You could sense a slightly different dynamic and energy in each of those conferences. It’s not that the previous leadership wasn’t great, it’s just that, as someone new steps into that role, they bring fresh ideas and enthusiasm that refocuses the direction and creates a revitalized organization, ready and energized to face challenges head on.

Filling those large shoes at Local 99 is newly elected Secretary-Treasurer Mont Chris Hubbard. To continue the theme, you can feel the resurgence of energy at the local. He is doing all the things that a new leader must do. While he is learning the ropes, understanding the work and the depth of what must get done, he is also challenging the status quo. He is making us look at the way we work with a new set of eyes and experiences. We will all learn from the transition taking place. I believe we will end up with a stronger, revitalized, and more efficient and effective local.

What this summer of change brought into clear relief for me is the importance and value of a fresh set of eyes, or a new backdrop for the work we do. I’m not just talking about local officers and the AFM. I’m talking about all of us. Maybe it’s time to take a hard look at your career and where you’re at. Are you in a rut? Does it seem like new ideas for moving forward have stalled? Do you have writer’s block? We all need to change our perspective, whether it be through classes or training, a change in routines, time away from work (vacation), or even looking at some of our multiple work commitments and deciding whether they are moving us forward or holding us back. The process of “challenging” our status quo can lead to renewed energy, commitment, and a revitalized focus on our work.

Maybe it’s easiest to think of this as a reboot. It just might be time to take a good look at ourselves, our bands, the work we do, and make this our season of change.

Contractor Mark Welty of North Country Services was fined $280,000, plus $12,000 in penalties to the Alaska Division of Workers’ Compensation Benefits Guaranty Fund and a $2,000 fine from the Municipality of Anchorage after employee Nicholson Tinker was killed on the job.

Welty unlawfully classified Tinker as an independent contractor in an attempt to avoid the responsibility of providing a safe and healthful work environment, along with basic employee injury and death benefits.

Tinker was killed when a cinderblock wall collapsed on him during a demolition. Welty acted with plain indifference towards the health and safety of his employees—lack of proper structural assessment, inadequate bracing and shoring for the wall, and lack of safety training for the employees.

“I hope this sends a clear message. When employers like Mark Welty endanger their workers and unlawfully classify them as independent contractors, our department will seek the strongest penalties possible,” says Alaska Labor Commissioner Heidi Drygas.