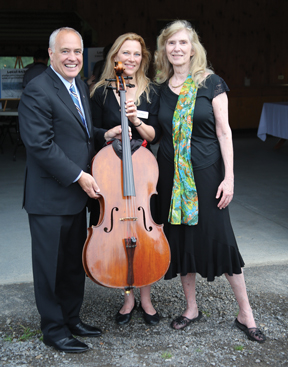 New York State Comptroller Thomas P. DiNapoli grew up with both of his parents as union members—his father with the communications workers union and his mother with the civil service employees union—and he still remembers the lessons he learned as a child about the labor movement.

“I remember vividly how important it was for [my mother] to know that she was working in a job where the unions looked out for her, gave her decent working conditions, gave her the dignity of the pension that could be there when she retired,” DiNapoli told members and prospective members of Local 443 (Oneonta, NY) when he addressed their Open Membership Meeting and Membership Drive in August. “Had it not been for the union movement, and the unions that looked out for my parents when they were working, we would not have had the middle class lifestyle that we had, and I would not have had the opportunities that I had to go on to college and do what I am doing with my life.”

DiNapoli complimented Local 443 and all unions for what they do, saying that people often take for granted the impact that unions have on communities. “Unions don’t just happen; they happen because people come together and choose to make a difference,” he said. He added that the numerous recent labor-friendly achievements in the New York state legislature came about for the same reason: “because men and women are organized through unions and the unions then talk to the elected officials—and your voice does have an impact and your voice does make a difference.”

All the day’s speakers focused on the need for a broad movement toward uplifting unions through increased visibility and positive perception of their value to communities. “That’s what union people do: We support each other; we stand up with each other; we stand up for the little guy,” Taliercio said. “Labor union stories are never front page unless there’s a strike, so we all have to speak to each other, speak to our neighbors, and we’re not some greedy workers; we stand up for the community.”