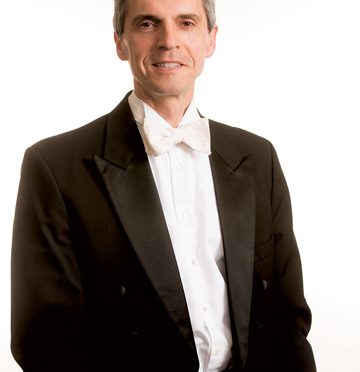 A new website, increased communication, and improved outreach efforts have helped Omaha, Nebraska musicians strengthen their local union and garner new members. Local 70-558 President Thomas Kluge, who initiated the changes, loves his job as a symphonic violist and his musical community—which is ironic, since, as a young student he was told by a violin teacher not to pursue music as a career.

A native of Milwaukee, a big union town, Kluge says he was encouraged to join the AFM at 17 years old. He had begun taking violin lessons at home with his father at five years old. Later, he studied with a local violinist, who was also a lawyer—who did his best to discourage his young student from pursuing music. Kluge says, “The funny thing is, here I am now, a professional musician and the president of the local union, and for the six years that I took lessons with him, he said, ‘Whatever you do, don’t go into music. You need to practice really hard, more than other people, but don’t go into music!’”

Kluge did go into music. At 19, he began studying in Switzerland with the distinguished violinist Max Rostal. He earned a diploma in violin pedagogy and viola performance and pedagogy from the Bern Conservatory and the School for Music and Theatre. He then studied viola in Germany with leading chamber musician Hermann Voss, a founding member of the famous Melos Quartet. Kluge is now principal violist for the Omaha Symphony Orchestra and for four years has been president of the Omaha Musician’s Association.

In New York, after four years abroad, he continued to study viola under the New York Philharmonic Principal Violist Leonard Davis, whom Kluge credits for helping to make his transition from violinist to violist. He eventually earned a master’s in performance from the Manhattan School of Music. On Davis’s recommendation, Thomas Kluge became a substitute in the viola section of the New York Philharmonic. The experience proved invaluable on many levels. At the time, there were people who still had connections to Leonard Bernstein, even some to the “Maestro” himself, Toscanini. It was also Kluge’s true introduction to the union. “I had been a member in Milwaukee—I played with professionals in Europe—but in New York there was a stronger presence of the union. I started to realize how important it was.”

In 1991, Kluge moved to Omaha for a position with the symphony. In the 1980s, there had been a union strike and the people who weathered the strike were still active and representing the orchestra. They were veterans of the symphony and of the union, Kluge explains, and ready to pass the baton. Kluge, who for a few years had taken on the role of spokesperson for the musicians, was elected to the orchestra committee. Slowly, he began ramping up his engagement on other union boards—the conflict committees, the contract negotiating committees, artistic advisor committees, and as a liaison to management.

It was almost like a generational shift, Kluge says, “Where the union came a-calling.” During one of the first strategy sessions about member recruitment, the same issue kept cropping up—how to attract new members. The local began by creating a website—an online presence that promoted members and the union and made it easy for the public to access musicians. Called The Omahamusic.com Advantage, the site now boasts more than 400 bands and musicians and hundreds of musical events each year.

Thomas Kluge says visitors can shop around in one place, and members report they have gotten more work this way. For some, it’s been more of a boon to their business than their own websites. “It’s has been great for driving traffic directly to our members,” he says. “People searching for any type of music—whether it’s for a wedding or a corporate cocktail reception—as long as they search Omaha they will be directed to our site. From there, they’re linked to specific music, and to a band’s or musician’s professional profile and photos.”

Another action, brokered by Dan Cerveny (a keyboardist) and Secretary of the Omaha Musicians’ Association, was the renegotiation with the Omaha Performing Arts on the scale for traveling Broadway shows. The agreement (now entering its sixth on extension) was codified five years ago on a “Midwestern handshake,” says Cerveny. “It was formalized and updated to make it comparable to venues of Omaha’s size.” On a very local level, when an individual musician was stiffed out of a gig and the venue canceled his hotel room, Cerveny took care of that too, Kluge says, “the old-fashioned union way.” Not only did Cerveny step in, but he worked with the Omaha Federation of Labor and the musician was compensated. Kluge adds, “We have also gotten people money for new equipment when it was damaged at gigs.”

Thomas Kluge says it’s important to get the word out to young players. “Many don’t realize they can get their equipment and instruments insured. They don’t realize that if they are members they can go down to the union office and get a hard copy of a paper contract or download one. You basically get things guaranteed and our union will support you if anything goes wrong.”

For Kluge, it does not always come down to a board meeting at the union hall. On his nights off, he tries to make appearances at as many gigs as possible. An important part of being a union official, he says, is getting out into the community to hear other bands and concerts, fully engaging with the local music scene and other musicians. “I think it would serve musicians well if we shared some experiences. For instance, jazz players should get to know classical players. We like to say there’s strength in a union, but I think it can get a lot stronger if we navigate outside our group.”

When he makes the effort to go to gigs, players recognize Thomas Kluge not only as a musician in the symphony but as a local union president—who follows his own best advice. “I’ve got a night off, but really I don’t have a night off because I represent my colleagues and I need to be out there with them,” he says.

This summer—as he has done every summer for 18 years—Kluge performed at the Peninsula Music Festival. Now in its 67th season, the festival presents nine concerts over three weeks with musicians from the country’s best symphonies, making it home to the most exclusive chamber orchestra in the country. This fall, as he embarks on a new season at the symphony, he will be coaching and mentoring in programs offered through the Omaha Symphony and the Omaha Chamber Music Society (of which he is a founding member). Along with his union duties, Kluge also teaches privately. To those students—if they are serious about music—Kluge says, “Go into music and if you do, join our union.”