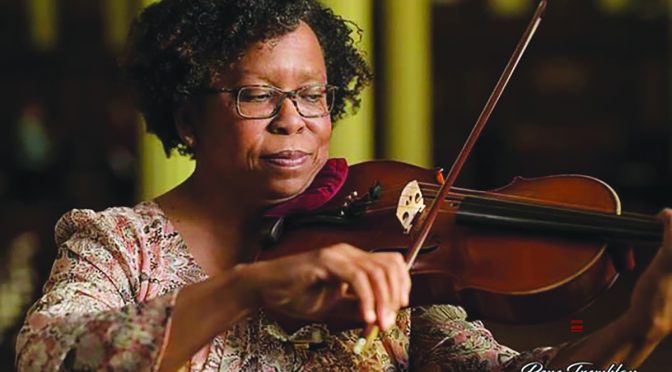 You’ll often hear Suzuki teachers say that it’s not just a method, it’s more a philosophy of life. The Suzuki Method, founded in the post-WWII years by Japanese teacher Shinichi Suzuki, utilizes the concept of “character first, ability second,” with a goal of embracing the whole child and developing character rather than just the mastering of a musical instrument. It’s a teaching philosophy that violist Romona Merritt of Local 5 (Detroit, MI) believes in wholeheartedly—not least because she says it helps her be a better teacher.

“Suzuki is very much centered on a circle involving teacher, parent, and student,” says Merritt. “The parent is always involved from the very beginning, so they can observe and help their kids evolve and progress.” But a big part of the method, she adds, is also what the teacher learns. “I enjoy the pedagogy because Suzuki students actually learn how to practice. But that works both ways. When I started Suzuki, I also started to become a better teacher.”

Merritt first encountered the Suzuki Method in Birmingham, Alabama, where she played for 17 seasons in the Alabama Symphony Orchestra. She grew up in Jacksonville, Florida, where gospel music at home led to the discovery of the viola at age 9 through her school’s string program.

“The violin was too high,” she recalls. “The viola just fit my personality.” Following a master’s in viola performance at the University of Minnesota, Merritt was chosen in 1994 to participate in the Detroit Symphony Orchestra’s African-American Orchestra Fellowship program. She characterizes her two seasons with the DSO as a “pivotal point in my life.”

DSO Fellows are not just extras or fill-ins. “You audition, and you’re there working in the orchestra for two full seasons,” Merritt explains. “You’re paid the same salary as regular DSO members, receive private instruction, and are given a mentor. There are mock auditions, and it’s an incredibly supportive environment.” She believes programs like the DSO Fellowship are crucial for Black musicians. “If you’re interested in having an orchestral career, a program like this with an orchestra that really cares about what you do is vital. You get to observe the audition process, learn how orchestra committees work, and have regular access to the hall.” Most importantly, she says, fellows are treated as equals by their DSO colleagues. “You really don’t experience any difference, even as a fellow.”

Merritt had been freelancing in grad school, but after two solid years of section playing in Detroit, she won her first orchestra job in the Grand Rapids Symphony, and a position with the Alabama Symphony a year after that. “So, it was a great intro to the career field,” she says.

These days, Merritt is back in Detroit and says her playing/teaching balance is about 50/50, subbing with the DSO, playing viola with various groups in the area, and forging ahead with Suzuki—assisted by an MPower Artist Grant from the Detroit-based Sphinx Organization, which has a stated goal of transforming lives through the power of diversity in the arts.

“This is my second grant, both of them for teaching,” she says. The current grant will allow her to complete her Suzuki in the Schools Level Two Teacher training. “These grants are crucial,” she says. “Students can struggle if their playing foundation is unstable. Grants give teachers a means to live so that we can focus on learning how to be better teachers and help our kids establish that solid foundation.”

In return, Merritt teaches at the Sphinx Overture Summer School, which partners with Detroit Public Schools to offer free violin instruction. She was able to continue all of this during the COVID-19 pandemic. “We were fortunate in that classes and instruction all went virtual, so we could keep going with this important work,” she says. More recently, she was also selected to participate in the National Alliance for Audition Support (NAAS) 2021 Summer Online Audition Intensive, Sphinx’s national initiative to address diversity in American orchestras through mentoring audition preparation.

Asked if she might be a role model for Black kids—and specifically Black girls—wanting to make a career in music, Merritt beams. “I really hope so. It’s inspiring to see these kids find something they love, and to understand that they can do it if they put in the effort. And it’s not just about violin, it’s about their whole being. I hope they see that it may be frustrating, and it may take hard work, but they can be a foundation for their community and others who need that same guidance.”

Merritt adds that laying this foundation means not just teaching them to be motivated and organized, but also building up their self-confidence. “I make sure that they know how and what to practice, and understand what their goals are,” she says. “Suddenly it becomes exciting, and they see results. But beyond that, they learn how to believe in themselves, how to stand up for themselves, and know that they are important.” Merritt says that’s ultimately the key to their success. “They learn to always command respect—and show everyone that they deserve that respect.”