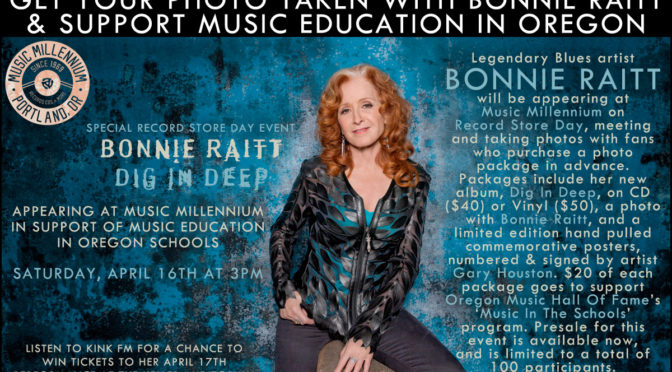 If you are lucky enough to live in Portland, Oregon, you can celebrate Record Store Day 2016 with Local 47 (Los Angeles, CA) member Bonnie Raitt. She will be at Music Millennium on Saturday, April 16 at 3:00 p.m., ahead of a sold out performance at the Keller Auditorium on April 17.

She will meet with 100 fans who purchase the special Record Store Day packages in advance. The package includes her new album Dig In Deep on CD or vinyl, a photo with Raitt at Music Millennium on Record Store Day, a limited edition hand pulled, numbered, and signed poster by artist Gary Houston, and a $20 donation towards the Oregon Music Hall of Fame’s Music in the Schools program.

“Few artists have played such a pivotal role in the connection between music fans and record stores quite the way Bonnie has,” said Record Store Day co-founder Michael Kurtz. “We couldn’t be more thrilled to have Bonnie celebrate the release of her awesome new album with us at Music Millennium and the fact that she’s doing it as part of a fundraiser for music education is just icing on a delicious cake.”