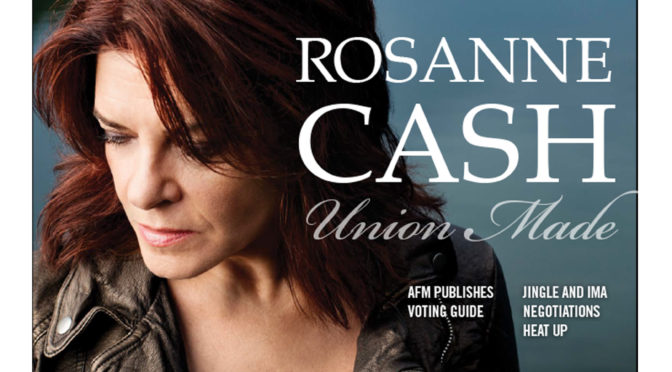 Local 802 (New York City) member Rosanne Cash laughs about how she’s “union made,” as a 35-year member of the AFM and AFTRA. She says she was encouraged to join the AFM by her father, Johnny Cash. “It was an honor to join the union; it means you are a professional. I became part of this community of other professionals, and I took great pride in it,” she says. “I still have great pride in it.”

Cash reluctantly, but decidedly, entered the music business because of her love for music. However, she did so cautiously, having witnessed her father’s struggles firsthand.

“There was no other choice; this is what I had to be in this world. I wanted to be a songwriter so much that I went in with my head down,” she says. “I thought that being famous was the worst thing that could happen to you, and that a performer’s life was so difficult; the music business is a tough, tough business. A lot of people think it’s easy and glamorous. I had no illusions; in fact, it was almost the reverse—I didn’t appreciate that it could be satisfying.”

Her music career began shortly after finishing high school. When she told her father she would like to become a musician, he took her on tour and he gave her a list of 100 essential songs she should know. It was a list she cherished, and six years after his death, it became the subject of her album The List.

Cash says she never really gave her father’s career much thought growing up. “You take for granted anything your parents do when you are a kid,” she explains, adding that, like every kid back then, she wanted to listen to The Beatles. “Later on, when I became a songwriter myself, I appreciated just how rare what he did was.”

His best “music industry” advice to her: “Take care of your family first.” “He didn’t love the business,” she says. “He loved the music, and he loved being a writer and a performer, but the business kind of irked him and he got into plenty of conflicts.”

The List was selected Americana Music Award for Best Album of the Year in 2010. Rosanne Cash has had 11 Grammy nominations, and won Best Country Vocal Performance in 1985 for “I Don’t Know Why You Don’t Want Me.” She has had 21 top-40 country singles, including 11 number one hits.

In January, she released her 15th album, The River and the Thread, with 11 tunes co-written with her husband John Leventhal, who is also a member of Local 802. It’s her first album of original music since her introspective 2006 album Black Cadillac, written after the death of her parents and stepmother. She sees the three albums as almost a trilogy—Black Cadillac “mapping out a territory of mourning”; The List “celebrating her family’s musical legacy”; and the new album tying “past and present together through all those people and places in the South I knew and thought I had left behind.”

Though she was mostly raised in California, The River and the Thread feels like a homecoming album, reconnecting her to the South. “Both my parents are Southerners and I have so much family still in the South. Because of how much we love the music that came from there, and the literature and the food, it’s an ancestral connection, a musical connection, spurred by love,” she explains.

“I’m doing quite a few concerts in support of this record; I really am proud of it. These are songs I’ve been trying to get to for a long time, lyrically,” she says, alluding to her belief that the songs exist already out in the universe and the songwriter’s job is to capture them. “I hadn’t written an album in seven years, so it would have been satisfying, even if the songs hadn’t been as good.”

The album is less a first-person account than some of her previous releases. “There are some total third person character songs,” she says. “Of course, my life is threaded through it, no pun intended.”

“It was like each song had its own process of being written, and that included the way it started and how we worked together on it,” she says, explaining that she wrote most of the lyrics, while Leventhal wrote most of the music for The River and the Thread. “It was all challenging and wonderful.”

The concept for the album came together thanks to a project to restore Johnny Cash’s childhood home in Dyess, Arkansas. “I started to go down south a lot because of the restoration,” says Cash. On one of the first trips, Marshall Grant, Johnny’s longtime bassist and a close family friend, passed away.

The first song composed for the album, “Etta’s Tune,” is based on something Marshall’s wife, Etta, told Cash and Leventhal. “She said they woke up every morning of their lives and said, ‘What’s the temperature darling?’ We thought that was so ineffably sweet, and John said, ‘Also the first line of a song,’” says Cash.

The song “The Sunken Lands,” on the new album, tells the story of her grandmother’s difficult life in Dyess. “At the same time, I was going to Florence, Alabama, to visit my friend Natalie Chanin and she was teaching me to sew. And she said, ‘You have to love the thread,’ and she wasn’t speaking in metaphors,” Cash explains. That became the “thread” in the album title.

The “river” came from other travels with Leventhal looking for inspiration. “We took this fantastic trip down Highway 61 [which runs along the Mississippi River] with some side trips to Oxford, Mississippi [William Faulkner’s home]; Dockery Farms [where Howlin’ Wolf and Charley Patton worked and sang]; and Money, Mississippi [the former location of the infamous Tallahatchie Bridge]. When we were on Money Road, John said, ‘We’ve got to write a song about Money Road.’”

The area is steeped in legend and history. A nearby, now abandoned country grocery was where teenager Emmett Till reportedly flirted with a white woman and was later murdered for it, sparking outrage that helped launch the Civil Rights movement. Just a couple miles from there is Robert Johnson’s gravesite.

The co-writers used these numerous trips as inspiration for the songs. They spent time in Memphis, where Cash was born, visiting sites like Sun Studio, where her father cut his first record. “All of these experiences were so profound that we needed the distance of being in New York to write about it, I think,” says Cash.

Though it has been almost 40 years since she began her career, Cash has adapted well to the music industry’s latest fixations with social media, particularly Twitter. “I started doing it because I enjoyed it, and now I see that it’s incredibly effective in getting out the word about a new record,” she says. “I don’t like doing straight PR on Twitter. I enjoy it as a kind of café society, but I also use it to let people know about projects.”

Also an accomplished author, Cash has published four books, including her 2010 bestselling memoir, Composed, which tells her story from childhood to today.

Though music is her life, Cash is quick to heed her dad’s advice, and put her three grown daughters, teenage son, and husband first. “Saying no is very powerful,” she says, explaining how she’s learned to balance it all. “I hope I’ve refined what I do. I’ve worked on my skills and the quality of songs I can catch. I think I’ve strengthened my work ethic.”