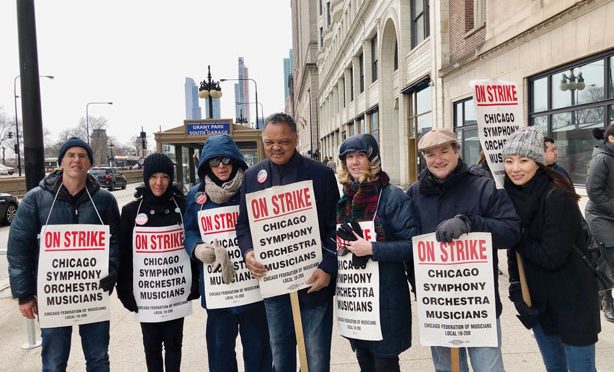 On April 24 Chicago Mayor Rahm Emanuel stepped forward with an offer to help the parties reach agreement and end the Chicago Symphony Orchestra (CSO) strike, then in its seventh week.

“For more than 125 years the CSO has been a crown jewel within Chicago’s rich cultural landscape,” Emanuel noted in a statement. “None of us want to see that jewel tarnished. After speaking with both parties, it appears that we should be able to achieve an end to this seven-week strike. Therefore, I am offering the services of my office to serve as a forum where both parties can work in good faith to facilitate an equitable and fair solution and that brings an end to the current impasse.”

Striking musicians and CSO management have both accepted the mayor’s offer, which comes in the wake of CSO management’s rejection on April 16 of a contract proposal brought forward by CSO musicians.

“The Chicago Federation of Musicians offered another compromise proposal, which was flatly rejected by the Chicago Symphony Orchestra Association,” says Steve Lester of Local 10-208 (Chicago, IL), bassist and chair of the musicians’ committee. “The association restated their ‘last, best, and final’ offer [which was voted down overwhelmingly by musicians on April 8] and has not budged an inch, nor shared any new path for resolution.”

A major sticking point in negotiations is management’s proposal to eliminate the CSO’s defined benefit pension plan and replace it with a defined contribution plan. Analysis of the figures shows that, over the next 10 years, management’s proposal would actually cost the institution at least $11 million more than simply maintaining the existing pension plan. Management’s proposal would shift all investment risk to musicians. “We’re willing to share the risk,” says Lester. “But we’re not willing to assume 100% of the risk in investment returns and economic volatility.”

There has been an outpouring of support for striking CSO musicians. Illinois House Democrats led by Jan Schakowsky and including Danny Davis, Bobby Rush, Robin Kelly, Bill Foster, Raja Krishnamoorthi, and Chuy García came out to speak and deliver a letter of support from Speaker of the House Nancy Pelosi. Senator Dick Durbin (D-IL), Representative Sean Casten (D-IL), and Reverend Jesse Jackson have stopped for conversations. Other musicians, patrons, and friends continue to walk with the CSO musicians.

The International Conference of Symphony and Opera Musicians (ICSOM) issued a Call to Action on April 8 soliciting support for CSO musicians during this difficult time. On April 24, ICSOM announced that contributions had topped $200,000 with additional amounts being pledged daily.

CSO performances have been canceled through April 30. Since the strike began, CSO musicians have presented numerous free performances of their own throughout Chicago.