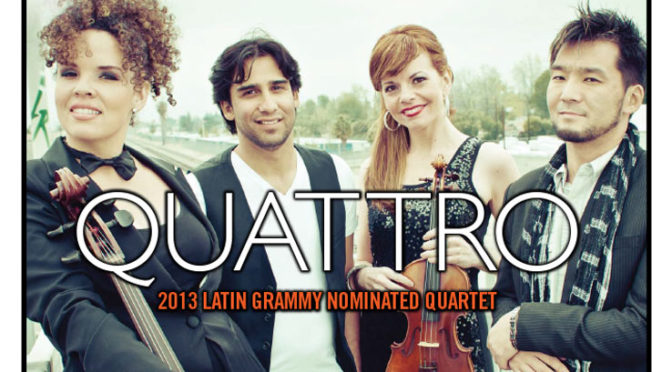 After three years of hard work and sacrifice, Quattro feels honored to have been nominated for Best New Artist at this year’s Latin Grammy Awards.

“Diversity is the essence of the group and music is our universal language,” says Clayton. “The fact that a group made up of such different and diverse people can come together and create something so vibrant, soulful, energetic, and moving translates to an incredibly diverse audience. It is a testament to what happens when you respect and embrace each other’s differences.”

Critics continue to praise them, branding Popzzical as “eclectic, sun-filled, and introspective,” while emphasizing its virtuosity. The contemporary music community is also not shy in accepting Quattro, according to Dondlinger, who is pleased they have achieved this kind of recognition.

“Quattro represents so many cultures and so many genres, but at the end of the day we represent good music. This is what connects us to fans of all nationalities and all ages,” says Dondlinger. “Everyone has embraced it, especially musicians that come to our concerts. They are raving because we’re all from [different] backgrounds. We’ve studied our craft for so many years. Now, to put four musicians at that level [together], giving everyone a chance to shine and highlight each of their instruments, musicians are drawn to that because it’s such a great vehicle.”

Matsuno says that, when they raised money from Kickstarter, it generated a lot of response from fellow musicians and gave them a special connection with their fans. The musical community likes to support musicians who make decisions for themselves. A rewarding result of this is to receive credibility and praise such as a Latin Grammy nomination, he adds.

Though they didn’t win this year, just being nominated is like a dream come true, says Dondlinger. “As a musician you put your heart and soul into what you do never knowing what the response will be. It is always a thrilling surprise to be nominated for an award associated with your art.”

Popzzical presents an even balance of arrangements and original pieces, according to Dondlinger. Matsuno is responsible for a majority of musical arrangements, but each member contributes an individual flare to the group’s approach and songs that are written in both English and Spanish.

“There is no specific process that we go through other than bringing the ideas to the table and seeing how it organically grows from there,” Clayton adds. “What we’re trying to convey is unity from so many differences and essentially good music—soul music.”

As far as songwriting goes, Clayton or Matsuno will often work with ideas that were written a long time ago, such as starting with a famous classic composition, and adding a lot of different elements. For example, they may choose a piece meant for a jazz trio where Matsuno arranges it in a completely different fashion, preparing it for the tone of a violin, the harmony of a cello, and appealing rhythms.

“We do not spend much time composing, per se,” he adds. “We spend more time on arranging.”

Quattro’s blending of musical influences comes naturally. It’s not that the group is steering in any particular direction, according to Villanueva. “We didn’t choose any specific route,” he explains. “We all arrange [in] our own style and create this type of music.”

“That’s another reason why we had to create our own genre of music,” Dondlinger admits. “That’s why we call it ‘popzzical,’ because nobody could put it in any particular box, so we decided to create our own word.” The name comes from a combination of their main genres—Latin POP, jaZZ, and classICAL.

The group does not believe this approach separates them from their audience or alienates fellow musicians in any way. Instead, they feel that people gravitate toward it because it is something everyone can relate to. The members of Quattro feel they will continue to attract a broader audience because of it.

“I think it brings us closer to every one of our audience members,” Clayton says. “The beautiful thing is that, no matter who is listening, they can find something to relate to.”

Aside from their 12-song full-length album, Quattro revels in additional material celebrated in live shows that are often geared toward particular performance situations. For example, when performing in jazz clubs they will often play Local 36-627 (Kansas City, MO) member Pat Metheny covers, along with songs by Béla Fleck, a member of Local 257 (Nashville, TN), and Chick Corea of Local 802 (New York City). And, when playing for a more classical-driven audience, they focus more on a traditional crossover.

The group sees itself as breaking a lot of rules, Villanueva says. Combining instruments and music from around the world is a big motivation and inspiration to keep going, keep writing, and keep being who they are. He considers this attitude to be a lifestyle choice more than anything.

“I think music is so transparent [people tend to] see through musicians and I guess it’s my biggest inspiration to be able to communicate to the crowd where we come from as [artists] and human beings,” Villanueva says.

Clayton feels that the music itself is one of her biggest muses. Whatever training a musician may have, they are often not encouraged to explore other genres, she says. It took her a long while to realize why other musicians don’t dabble in a variety of styles. She considers herself lucky to have a connection to multiple genres and to have found other musicians to cross boundaries with.

Each member of Quattro says that joining the union was a valuable career decision.

Clayton joined the AFM at 16. The daughter of professional musicians, her distinctive cello method owes tribute to growing up in a multicultural household. She says that once you are in the union you are validated in the world of music, especially when working for orchestras. She plays with the Los Angeles Chamber Orchestra, New West Symphony, and Hollywood Bowl Orchestra, and her résumé already includes a string of film scores, soundtracks, and TV shows.

Dondlinger became an AFM member in 2000, when she began work at the Henry Mancini Institute at the Frost School of Music, University of Miami. As a young adaptable violinist she has performed with top artists ranging from Celine Dion to Luciano Pavarotti, as well as house bands for American Idol, Dancing with the Stars, and The Tonight Show.

Born in Osaka, Japan, Matsuno was encouraged early in his career as a session guitarist to join the union. He joined about 10 to 15 years ago while playing with an artist on Virgin Records. It was one of his first recordings with a major recording artist and he credits Local 47 as being a huge help. Additionally, he says he is personally grateful to the union for its work lobbying for a law that grants musicians permission to carry their instruments on flights. Every time he went on tour it used to be a huge issue, according to Matsuno.

Villanueva joined the AFM during a Disney recording gig at Capitol Records. Born in Tijuana, Mexico, he continues to tour and play with high ranking Latin stars such as Christian Castro and Alexander Pires, as well as for TV Azteca, Univision, and LA TV. Villanueva is co-owner of Elefekto Music, film, and TV scoring company.

The AFM grants access to contracts, rules, regulations, rights, and more, the members explain. “Everything is very accessible,” Clayton says she’s glad the union is there to help negotiate collective bargaining rights, especially when it comes to performing in an orchestra.

She is also a member and representative for the Regional Orchestra Player’s Association (ROPA). “Going to that conference really opened my eyes to how important it is to all of us as musicians, and what the union does,” she says. “They not only negotiate contracts, but there are so many things happening behind the scenes.”

Clayton recalls one experience when the union came forward to defend her in an abusive work situation: they did not want to pay her properly. The AFM ensured proper legal representation and fought for equal working conditions.

“It is a really huge thing knowing we have that resource,” she adds. “I think musicians should make more of an effort to learn its inner workings and what the union is doing for us.”

It looks as though this year’s Latin Grammy nomination was probably only the first big honor for this group given it’s fresh outlook and sound. Future plans for Quattro include more tours, videos, and albums, all while reaching out to as many people as possible.

“We always say, ‘Please join our Quattro journey,” says Matsuno. “We think we are with our supporters no matter where we play and what we are doing. It feels great that we can take them on this amazing journey. This journey will go on for quite a long time.”