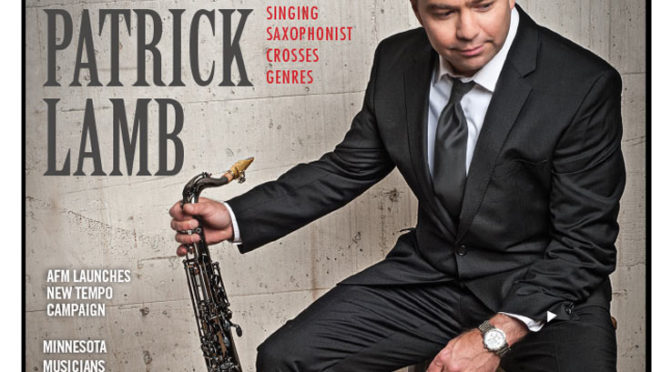 Patrick Lamb of Local 99 (Portland, OR) began his career on saxophone touring with jazz singer and pianist Diane Schuur of Local 7 (Orange County, CA) and later with Bobby Caldwell of Local 47 (Los Angeles, CA) and Local 99 member Gino Vannelli. In recent years, Lamb’s begun to focus more on his own career as a performer. He’s released six albums so far.

In talking to him it’s evident he truly appreciates all the teachers and mentors who helped him along the way. Lamb was introduced to music by his father, who aside from being a school teacher, supported his family by playing piano in honky tonks. “I always had some great music playing in the background,” he recalls, “from Ray Charles to Charlie Parker to Coltrane it was quite the gamut of material.”

After Lamb’s father completed his doctorate at the University of Texas, he took a job in Portland, Oregon, and that’s where Patrick Lamb began his formal music education at Cedar Park Middle School. “The beginning band teacher [Robert Ernst] was the same beginning teacher that [Local 802 (New York City) member] Chris Botti had,” says Lamb, recalling how the teacher inspired him and helped him select an instrument that suited him.

“At first, I tried the clarinet. I played it for about a week and I didn’t like it much,” he says. “I picked up the saxophone and it immediately seemed right.”

Lamb excelled at saxophone, quickly burning through all of the beginning band books and gaining confidence. “I think my dad thought I was getting a little cocky, so he came back one day and said, ‘Here’s a book I got for you. Learn this.’ It was Charlie Parker Omnibook,” says Lamb. He immediately set to work on the book of transcriptions.

“At first I was overwhelmed, but I started with ‘K C Blues,’ then I learned ‘Au Privave.’ After learning a few solos, I developed some confidence and the next step was going out to jam sessions,” he says.

That’s when the real education began. Lamb sat in with a veritable who’s who of jazz musicians passing through Portland. “You work on one song at a time, go to the jam session, improvise, and get some feedback. That’s the camaraderie of jazz. They want to see you put it on the line,” he explains. In particular, Lamb recalls how local drummer Ron Steen mentored young musicians, while schooling them in jazz. “He was always hosting jam sessions and encouraging people to try out their wares.”

Some of the lessons included tough love. “One of the first songs I played was ‘My Buddy’ and I thought I knew it pretty well, and he [Steen] could tell by about the second chorus that I didn’t know it as well as I thought,” recalls Lamb. “He signaled the band to break it down to just the hi-hat and me, and basically that put me out there to sink or swim. Those were my early lessons as a kid—going to the sessions and getting my butt kicked. It makes you go home and practice and get your act together.”

By the time he was 16, Lamb had begun to pick up a few paid gigs and he joined the AFM. “I think when you first get into music, you aren’t thinking about business, you are thinking about art,” he says, adding that the union is a resource to help understand the music business. “If you don’t understand the mechanics of the music business and how things work, you are going to miss out on a lot of income streams.”

“Anyone interested in getting into the music business needs to be involved with the musicians union. It’s really one of the only tools that works for the interest of musicians as a whole. It’s out there fighting the good fight, trying to get people paid with Pandora, Spotify, and working for our rights. I don’t think a lot of people are necessarily aware of that,” he adds.

At 18, Lamb got his first big break playing with Diane Schuur. “It was serendipitous, like so many things in the music industry. A friend who was playing in her band was already booked and he recommended me,” says Lamb about the sold out gig at Portland’s prestigious Arlene Schnitzer Concert Hall. “I didn’t even know what it was; I’d never played a place like that.”

“Her manager sent me her records and I transcribed all of the solos,” he says. “We had one rehearsal and a sound check.” Schuur was so impressed by Lamb’s preparation and abilities that she asked him to join her tour.

More recently Lamb has toured with R&B vocalists Bobby Caldwell and Gino Vannelli, and along the way developed a solo career. Today he plays about 250 dates a year that are a good balance of shows supporting other artists and his own.

Lamb’s latest two CDs—the old school R&B and soul vocal duet and instrumental project Soul of a Free Man (2007), and the funk, R&B, soul, and jazz vocal project It’s All Right Now (2011)—demonstrate his versatility. Lamb says that Schuur encouraged him to sing, asking him to sing in her show. “Later on I sang some duets with her. Every artist I’ve toured with thus far has had me either sing background or verses, and share the stage vocally,” says Lamb.

He is glad for the gradual, almost organic way his own career is developing. “I think it’s made me appreciate the successes a lot more,” he says. “I learned from every single artist that I’ve toured with.”

“Being a great support sideman involves, first and foremost, conveying the music the way the leader wants it to be conveyed. Generally, that means learning it off the record exactly as it was recorded,” says Lamb, adding, “and there’s all the basic stuff: being on time, putting out the right kind of vibe on stage, learning about sound and sound checks, how to be a supportive artist, but also when it’s important to step up and shine. It takes time.”

Then, there’s learning to just “be” on the road with a band. “Being on the road is kind of like being in a family. Every family is different and every band is different. I’ve kind of learned over the years to try and reach out to people more on the road and hang like a family,” he says.

The modern music industry has obviously afforded Lamb a certain independence that wouldn’t have been possible 20 years ago. Aside from performing, he is a music industry entrepreneur with his own production company, studio, record label, and ticket company, Ticket Tomato.

“It used to be there were three major record labels and a lot of shotgun marketing and they would tell you what you should like, but none of that stuff really works anymore. In today’s digital age you can create something that’s authentically you,” he says. “I’m fond of saying that the best thing to bet on is yourself.”

“It’s amazing that anybody who has a small studio at home can create something that sounds good and get it out there. The downside is that the technology can make somebody, who might not sound so good, sound really good. But overall, in terms of getting stuff out immediately and having people hear it, and staying in touch with your fans, I love it!” says Lamb.

“If you are not on a major label, it’s a double-edged sword,” he concedes. “You have a responsibility to absolutely, whole heartedly stay 100% in touch with every single fan because your fans pay your bills; they come or don’t come to your gigs.”

Lamb seems to have an excellent handle on this new music industry, having run highly successful Kickstarter campaigns to fund his latest projects. “I’m religious about contacting and staying in touch with every single person who loves my music,” he says. “I have over 10,000 people on my e-mail list. I know, if I send it out to them, we are most likely going to be able to raise enough funds via Kickstarter for any new project I want to do.”

“For me, music is about sharing joy and I always keep that in the forefront. If you can share joy with your fans, that becomes part of your relationship, and they are going to always keep coming out to your shows,” he says.

According to Lamb, one of his greatest personal challenges was defining what kind of artist he wanted to be. In the end, that boiled down to embracing his diversity. “I’ve toured with so many different people, from Diane Schuur to Tommy Thayer. For me there’s just good music and bad music and I authentically love so much [of it]. I think there was a tendency for me to want to put myself in a box. Now I fully embrace the fact that I’m a versatile crossover artist. I have my own sound and my own songs.”

Saying that Lamb is grateful to all the teachers he’s had is an understatement. “I’m a big proponent of making beginning band programs an integral part of our society; it is so important because that’s where a lot of us start,” says Lamb who plans to launch a foundation to help support arts programs for young people and ensure that music remains a fundamental part of the education system.

The Patrick Lamb Foundation for the Arts will focus on the science behind why kids who study music have higher SAT scores, make more money over their lifetimes, and get along better with others. “The goal of the foundation is to fundamentally change the way people think about arts in our society,” he says, adding that they will focus on the scientific data first and the heart second, in order to get administrators, parents, and society to see music on equal footing with subjects like science and math.

Aside from the foundation, Lamb will continue to focus on his own music and writing this year. “I’ve got two very successful symphonic series that I’ve developed that have sold out here [in Portland] and I would like to see them performed in different symphony halls across America.” He’s also recorded a PBS special with Gino Vannelli, which is currently airing.

His advice to up and coming AFM musicians: “Stay inspired. If you feel like you reach a plateau, go find some interesting new music and just stay inspired. That will move you forward.”