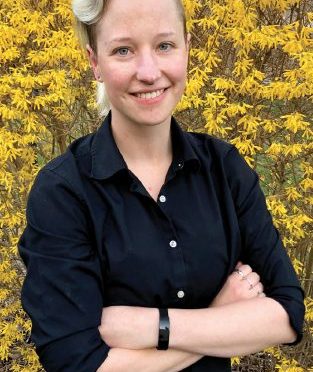 Aside from sharing the same clef, you’d think the tuba and the upright bass couldn’t be any more different. You’d be wrong. According to Kate Foss of Local 9-535 (Boston, MA) and Local 802 (New York City), both allow her to do what she does best: lay down the foundation of an ensemble. The choice to play both bass and tuba was natural for Foss, who grew up in a musical family in the suburbs of Milwaukee.

“As a kid, I was fascinated with large machines like locomotives and construction equipment,” she recalls. “So it’s not really a surprise that I was immediately attracted to the bass. It’s the largest string instrument, and you can feel the sound inside you.” And with the tuba, it didn’t hurt that Foss’s grandmother played one in high school. Foss adds that she’s not sure if playing in the low register shaped her personality, or the other way around—but she still gets the most musical satisfaction out of being the supporting voice in a group.

While Foss has carved out an impressively varied freelance career around Greater Boston covering a wide range from symphony and opera orchestras to musical theater, it’s worth noting that music wasn’t actually her first choice: Foss has an undergrad degree in physics. “Toward the end of my physics degree, I did a summer at the Pacific Music Festival, and quickly realized my passion was such that I needed to switch,” she says. Foss searched for grad schools that would accept students without a music undergrad, winding up at New England Conservatory. “While there, I started freelancing in Boston—and that was that.”

Over her years in Boston, Foss has racked up an impressive list of work in orchestras, recordings, and musical theater. Her theater credits alone include 48 shows on which she has played upright and electric bass, and/or tuba. Foss doesn’t claim to have a favorite genre. “It doesn’t matter what I’m playing. A bass line is a bass line,” she says. “The tuba has largely the same function in the orchestra as the bass. Beats one and three, lots of whole notes,” she adds with a laugh. “Obviously, the mechanics are different. With tuba, you have to start the note a second before you think you should. Prep the breath, set the embouchure, etc. Bass is immediate, the second you start moving the bow.”

Foss also thrives on the variety of a freelancer’s life. “If I had to do one genre, I’d get bored. Ballet is marches and dance numbers, and then it’s something else entirely in opera or musical theater to hear a singer who really knows what they’re doing and is in total control.” Having a vocal background certainly helps with her appreciation: Foss’s tuba-playing grandmother got a degree in voice and passed that love on to her own children and grandchildren. Foss has fond memories of singing Bach chorales around the piano with her family. (In that vein, Foss’s CV includes nearly two dozen BWV (Bach-Werke-Verzeichnis, or in English, Bach Works Catalog) numbers identifying the Bach choral works she has participated in.)

Like nearly all freelancers everywhere, Foss’s music work is mostly on hiatus at the moment thanks to COVID-19. She also admits somewhat sheepishly that her practicing has fallen to a minimum since the pandemic shut things down. “Forcing musicians to be solitary is like isolating a duck—there’s nobody to quack with,” she quips. But she also agrees with the assessment that switching off from music for a while is perfectly okay. “I’ve been hustling with gigs since 2003, and had been thinking of taking a break. So the coronavirus forced me to take an extensive one. It’s about learning to trust yourself that you won’t forget anything. It will come back to you,” she says.

Meantime, Foss has been focusing on other things. Aside from a busy day job, she took up cross stitch, and has become heavily involved with fostering homeless cats and kittens through the Quincy, Massachusetts, animal shelter. Her work with the AFM has remained a constant, both pre- and mid-pandemic. She serves on the executive board of Local 9-535, and has been reading up on the history of unions to help her understand what happened to musician wages over the last 50 years. “The importance of the union should be part of music education,” she says. “Young musicians need an understanding of how the music world has gotten where it is today, and what they can do about it. There are reasons why you have contracts, and why you need to advocate for yourself. Nobody will pay you unless you collectively bargain for it. I wish I had had that knowledge sooner.”

Several years back, Foss participated in unionizing a theater she worked at, and says it was a fantastic experience. From there, it was a natural progression to greater union involvement. She praises her local’s response to the pandemic, particularly its involvement in the New England Musicians Relief Fund, which has been working to alleviate financial distress for some 2,000 freelance musicians that make their living playing music in the region. “The more I get into board duties, the more there is to learn about the AFM and the music business,” she muses. “Like a typical musician, I like to complain—but it’s great to learn how to do something about it.”

Info on the New England Musicians Relief Fund can be found online at www.nemrf.org/our-mission.

On October 18, Postal workers and their supporters rallied in front of Boston’s main post office to protest job cutbacks that have led to long lines and delivery delays around New England. Scott Hoffman, president of the Boston chapter of the American Postal Workers Union, says hundreds of area vacancies have gone unfilled.

A pilot program to outsource operations to Staples, Inc. was scrapped last spring after a National Labor Relations Board administrative law judge ordered the US Postal Service to discontinue its retail relationship with Staples. The Staples deal was an attempt to replace union jobs with low-wage, nonunion workers.