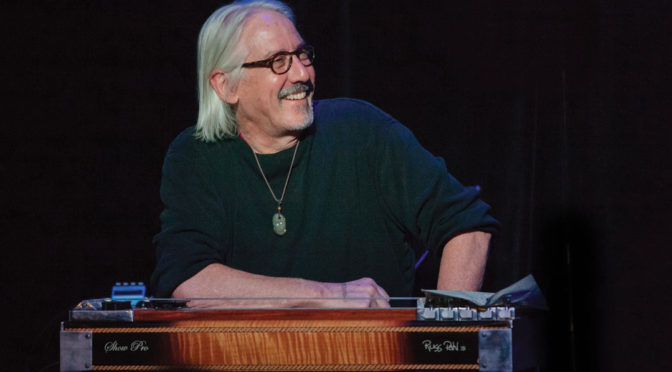 In his new CD, Renascence, Mike Daly showcases the range of the steel guitar with original tracks featuring artists who unearth sounds that are decidedly nontraditional—and not country.

Featured on the CD is one of steel’s most recognized session players, 82-year-old Lloyd Green of Local 257 (Nashville, TN), who has been in the forefront of the steel guitar since the mid-sixties. Daly of Local 257 (Nashville, TN) says, “He was the first person who helped me get started with the record; he got the whole ball rolling. I wanted to present players who not only play in the country music world, but who had transcended country music with their approach.” Known for his work with Paul McCartney and Henry Mancini, Green is recognized in Nashville and on the international stage. “He can play outside of a country song,” Daly says.

Enlisting top steel players, including the preeminent and ever-experimental British artist B.J. Cole, Daly easily crosses genres. He wrote and chose songs with each artist in mind. His collaborations with Dan Dugmore (Local 257) on Stevie Ray Vaughan’s “Lenny” and with Greg Leisz, of Local 7 (Orange County, CA), on “Ry,” suggest he chose judiciously.

Storied steel guitar player Robert Randolph also appears on the album. Daly says, “I was fortunate that everyone came on board with a very good spirit. Robert Randolph is a perfect example of taking steel guitar and presenting it in his own voice and on a platform that is not country.” Randolph’s fusion of rock, funk, and rhythm and blues has made him a jam band favorite and, Daly says, for this record, “He was a big piece of the puzzle.”

Green and Randolph, who met in Nashville, are two steel players from different generations who approach the instrument in the same way: an individual voice that is not country. Daly says, “It was a musical voice that happened to be played on the steel guitar. Green knew he had something special and encouraged Randolph, barely out of his teens, to cultivate it. Daly says, “Green said, ‘Don’t pay attention to detractors.’”

While it graces country songs with its plaintive, ethereal twang, the steel is perhaps a less celebrated instrument. With this record, Daly compels listeners to move beyond standard instrumentation. There is no electric guitar, just bass, drums, piano, and organ. He explains, “All the textures were somehow created on the acoustic instruments. That was the goal. I wanted to create all that on the steel to show people that there is a lot of depth, a lot of palates, and a lot of color.”

Daly credits his engineer Michael Webb of Local 257 for mixing the album and playing B-3, piano, and an accordion track on “Dimming of the Day.”

For the last nine years, Daly has been lending his unique sound on the pedal steel to Travis Tritt. He has also worked for two decades as musical director for Hank Williams, Jr. Between the two gigs for these Local 257 members, Daly ends up doing about 100 shows a year out on the road.

Currently, he is home in Nashville Sunday through Thursday. For session work, he alternates on the pedal steel, slide guitar, Dobro, and Weissenborn (a hollow neck acoustic lap steel guitar introduced in the early 20th century). On the weekends, he says, “I climb on a bus, I go somewhere and play. It’s kind of the best of both worlds.”

Daly grew up around Cleveland, Ohio, and played piano throughout high school. In 1973 the radio stations were brimming with country rock. Though he was a piano player, he was drawn to the sound of Duane Allman and Little Feat’s Lowell George on the steel and slide guitar. “I just went out and bought a steel when I was 18 years old. In a couple of years people started calling me. I learned a lot on the bandstand. I just bought a steel for my love of the sound and then I just kept at it.” Daly gravitated to players like virtuoso Rusty Young from Poco and “Sneaky Pete” Kleinow, who embraced more diversity and experimentation.

One of the players to whom Daly paid close attention was David Lindley of Local 47 who played fiddle, guitar, slide guitar, and steel guitar. Daly says, “I hardly ever say pedal steel guitar because I consider it all one family, whether it has pedals or not, whether it’s an acoustic instrument or an electric instrument. To me, if you’re putting a bar on it, it’s a steel guitar.”

Daly joined the union, and from 1975 to 1987 enjoyed great success playing to college crowds around Cleveland. One by one, though, those venues closed. He says, “We would play Baldwin Wallace University, Kent State. We played downtown Cleveland, below the Agora [Theater]. We had a circuit. A lot of it was built around colleges, and when they raised the legal drinking age, a lot of those establishments closed up—and with it a vital, live music scene as well.”

He relocated to Nashville and joined Local 257, doing sessions and TV shows, and eventually playing the Grand Ole Opry. “I wanted to be a professional musician, and part of that was being in the union and benefiting from being part of a collective that was looking out for each other. You receive a substantial, respectful amount of money for your talent and your time,” he says.

For the occasional lesson, Daly uses his background in piano to illustrate how music is played on pedal steel. He says, “The steel is somewhat abstract, but I try to simplify it and make [students] visualize what that pedal does, just like a piano chord. Within a chord, this is what this pedal does. It’s taking the fifth of a chord and moving it to a sixth. You can see the relationship between the notes within a chord, within an inversion.”

Recalling a performance back in 2007, when Daly joined CMT Giants, honoring Hank Williams, Jr., he says, “Someone took a picture of me. I’m standing between Steven Tyler and Buddy Guy [of Local 10-208 (Chicago, IL)]. I never could have dreamed of that living
in Cleveland.”

Daly is looking forward to spending less time on the road next year when he’ll be playing exclusively for Hank Williams, Jr. Playing more sessions, clubs, showcasing the steel, and in general, he says, being a part of the vibrant scene in his adopted hometown.