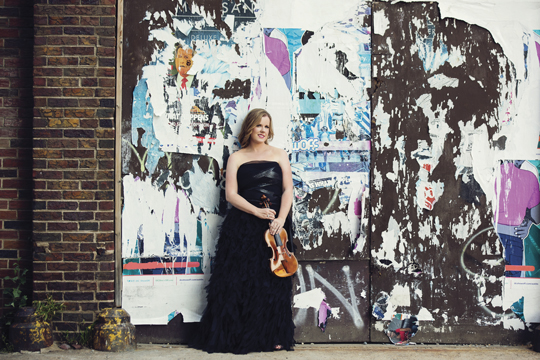 There’s no punchline coming; it’s a true story. Madeline Adkins won her place as concertmaster for the Utah Symphony Orchestra in 2016 in less than formal attire, not because she was trying to make any sort of statement, but because the airline she flew in on had lost her luggage. “I was very comfortable,” she says with a laugh, “but not very professional in my appearance.” Luckily for Adkins, the USO had just started doing blind auditions—part of their Collective Bargaining Agreement with the AFM—so what she wore did not turn into an issue. Only her playing mattered. And she was chosen for the position. “My friend said, ‘If you get the job, this will make a great story.’”

It’s actually only one of the many interesting aspects of Adkins’ musical career.

The daughter of noted musicologists, Adkins is the youngest of eight children, six of whom are professional musicians (including violinist Elisabeth Adkins of Local 72-147 (Dallas-Ft. Worth, TX). “Some families say, ‘Don’t be a musician if there’s anything else you want to do;’ but in our family it was the opposite. Everyone was expected to play and was encouraged to do so professionally,” Adkins says. “I grew up with all my sisters playing the violin, so I wanted to do the same.” Playing a string instrument was also actively encouraged by the Adkins parents because, at the time, string playing offered more employment opportunities than other instruments.

Madeline attended the University of North Texas (UNT) at age 16 through the early entrance program, and there played under conductor Anshel Brusilow, former concertmaster of the Philadelphia Symphony Orchestra. Even though she was young, Brusilow gave Adkins major solos and other opportunities, including serving as concertmaster for three years. “That was really instrumental in helping me on my way,” she says. “If you go to Juilliard, you’re lucky to sit as concertmaster for one program, and I got to sit there for three years. So it was really formative for me as I moved from a student towards a more professional point in my career.”

After UNT, Adkins earned her master’s degree at the New England Conservatory in Boston. She joined Local 9-535 (Boston, MA) while she was still a graduate student  because she was already playing in professional groups and subbing with the Boston Pops Orchestra. “It was important to me to become involved and become part of the professional musicians’ community,” she says of why she joined. “I think the benefit of any union is kind of like universal health care: You don’t want to just join when you’re sick or when you need something; you need to join when you’re fully able to contribute your time and resources to help sustain the organization and then, if at some point in time you need the assistance of the union, you, as a strong member, will have put in the work. It’s just fair.”

Adkins has learned first-hand what it means to be backed by her union, particularly through the protections gained through collective bargaining. In addition to the blind audition process for the Utah Symphony Orchestra—which made sure that she won or lost the audition based on her ability and not her sweatpants—Adkins also suffered an injury early in her career that sidelined her for about nine months. But disability and other job protections afforded to her as a union member saved her job. “I think it’s all about solidarity,” she says. “When we are all rowing in the same direction and turning towards improvements in conditions and representation for all, it’s more powerful to be in a group than to be an individual, or a sea of individuals, especially in the orchestra business.”

Adkins’ first professional audition, which she did during her final graduate semester at age 22, was for the assistant concertmaster position (third chair) in the Baltimore Symphony Orchestra. She won the position and, five years later, in 2005, moved up to the position of associate concertmaster. After 16 years in Baltimore (and as a member of Local 40-543) and appearances with orchestras across the US and the world, Adkins joined the Utah Symphony as concertmaster in September 2016. She is now a member of Local 104 (Salt Lake City, UT).

As concertmaster, Adkins’ role is much more than just walking onstage and tuning the ensemble—which people unfamiliar with orchestral performing may not realize. “I tell people that the concertmaster’s duties are divided into two categories: the things that you as the audience member can observe and the things that happen behind the scenes,” she says. She does tune the orchestra before each performance; she also plays violin solos and coordinates the bowing of every string player (in consultation with the other principals) to ensure all bowing is done in unison. Off stage, Adkins acts as the liaison between the conductor and the orchestra to help get a cohesive approach to the music, and also acts as a general leader for the players both musically and interpersonally, she says. “I really try to just lead by example; I think it is the most effective way for me,” she says. “You have to show up, give 150 percent, and earn people’s respect.”

One person’s respect that she earned is Gabrielle Israelievitch, widow of former Toronto Symphony concertmaster Jacques Israelievitch (1948-2015), whose 1782 “ex-Chardon” Guadagnini violin she loaned to Adkins to use as her performance instrument. “It has been one of the greatest joys of my professional career to play an instrument of this caliber,” Adkins says. “Something about it from the first notes I played just resonated with me, and I was thrilled she was willing to loan it to me. I feel it has given me more depth of sound and more expressive abilities just from being able to play it. It’s really like a partnership in that sense.”

Another piece of Adkins’ overall musical partnership is the one she holds with the entire orchestra. “There’s something about 90 or 100 people playing together, building a work of art together, that’s really amazing,” she says. This is the environment in which Adkins thrives; she loves the variety she has as a concertmaster, being able to play concertos, chamber music, solos, and orchestral repertoire. “If we have two or three programs in a week it’s never the same thing twice,” she says.

This variation is also part of how Adkins continues to grow as a musician and an artist—to continuously challenge herself. “I tell my students: If there’s something you’re afraid of, you should do it.” For Adkins, some of her self-challenges and variations have included taking improv classes and learning Irish fiddling to keep her playing fresh. She is also a believer in seeking advice and assistance from musicians she admires. “I think this goes along in the vein of pushing and stretching yourself … If you don’t know something, learn it and try it. You don’t get anywhere by sitting at home.”

And yet, sitting at home is exactly what Adkins—and the rest of the country—is currently doing due to the COVID-19 pandemic and the social distancing rules now in effect. “It was hard at first; we all went through the same sort of fear and panic, all those feelings, the disappointment from all those concerts that weren’t going to happen that we have all been preparing for for so long, and then you have to pivot to what you want to get out of the time that you have,” she says.

The Utah Symphony closed on March 12, but the musicians are still receiving pay and benefits thanks to the orchestra getting a federal small business forgivable loan through the government’s coronavirus relief efforts. Since then, Adkins has been exercising, reading, cleaning, working on projects, and playing her violin every day. “I’ve ordered a lot of solo music, since I’ll be playing by myself for the near future,” she says. “I’m picking challenging pieces for myself, work on what I feel like working on, and keeping up my fundamentals.”

Adkins and her husband have also been volunteering in their community. They help at the local food bank and at the mutual aid society where they contribute by doing shopping for immuno-compromised people. Adkins is a longtime volunteer in general, especially at animal shelters, and her passion for animal rescue has led her to foster over 100 kittens in the past 13 years. “I think if I hadn’t been a musician, I would have been a zoologist or biologist,” she says.

Like everyone else, Adkins is looking for the upside of the current quarantine situation, which she is finding a lot of online. “There’s a big burst of [musical] creativity that’s going on that is really interesting to be a part of and observe in our field,” she says. She is even finding that material posted online by the Utah Symphony and other symphonic employers has led to a greater connection to her community. “I just commented on a piece we posted that, ‘The Utah Symphony really misses playing for you guys and if you want to hear more of our stuff check our page,’ and about 65 people wrote and thanked me. The response was connecting me with my own neighbors in a way that hadn’t really happened before.”

And while home recording and digital performance is every musicians’ main outlet currently, Adkins says she does not believe it will hurt the work of orchestras or any performing musician. “People want that experience of a live performance; I think that’s something they miss, having that experience with other people,” she says. “I think the first time [the Utah Symphony] is on stage together and there’s an audience, it’s going to be incredibly moving.”