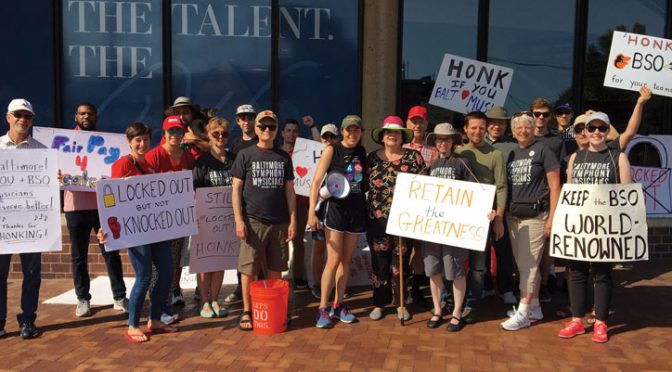 The musicians of the Baltimore Symphony Orchestra have been locked out of their concert halls and have not received a paycheck since June 17. How have the musicians been making ends meet financially and musically since mid-June?

Before the lockout, a few of the players had already made plans to play in festivals this summer, but since the lockout began, several personnel managers have hired Baltimore Symphony musicians to play in their orchestras. There are many photographs of orchestra musicians from around the country posing with our players and wearing Baltimore Symphony Musicians (BSM) T-shirts.

The BSO Players’ Committee and its supporters have worked hard to organize work for their colleagues in and around Baltimore. The biggest event to date was putting 60-plus musicians on stage for an Independence Day concert in partnership with the government of Baltimore County. Future concerts for the full orchestra are being planned.

BSM chamber groups have played across Maryland from the Washington County Museum of Fine Arts in the western portion of the state to the Dorchester County Center for the Arts and Temple B’Nai Israel on the Eastern Shore—making friends, creating awareness, and seeking long-term partnerships for the future. More concerts are planned.

BSM presented a Summer Subway Series, playing five concerts during the evening rush hour in one of Baltimore’s subway stations, calling attention to the upright piano that had been installed by the transit authority. A five-concert chamber music series called “The Healing Power of Music” was presented at Johns Hopkins Hospital.

When the First Annual Baltimore Jazz Festival was relocated from the Joseph Meyerhoff Symphony Hall to another venue so as to avoid the picket line, the organizer of the festival offered to the Baltimore Symphony Musicians an opportunity to play a set, access to reduced priced tickets, and some financial support. Make Music organized a string quintet with oboe, trumpet and percussion to entertain festival attendees with music of Piazzolla, Reinhardt, Ginastera, and Ravel.

When the employer canceled BSO’s summer work, it also canceled what was going to be the 10th anniversary of the BSO Academy, a week-long intensive side-by-side fantasy camp for avocational musicians. Make Music with BSM devoted two weekends in July to an intensive three days of playing and coaching chamber groups, and brass ensemble and string orchestra reading sessions at a Baltimore church, thus creating a last-minute replacement for the Academy.

A few other hall rentals were relocated away from the Meyerhoff Concert Hall this summer. Local 40-543 and the Baltimore Symphony Musicians thank International Alliance of Theatrical Stage Employees (IATSE) Local 19 for their cooperation and ongoing support during this summer’s lockout.

The next bargaining session is scheduled for August 21. The musicians believe it is important to get the orchestra back on stage, but not without a ratified collective bargaining agreement in place.

Thank you to all of the orchestras, AFM locals and individuals who have contributed to the support of the Baltimore Symphony Musicians.