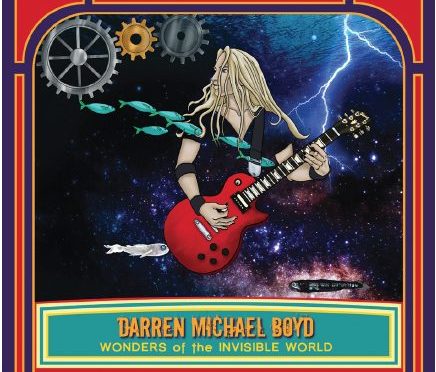 Wonders of the Invisible World is a 1693 book recounting the Salem Witch Trials in which the author, Cotton Mather, espoused the belief that the prosecutions of the “witches” were to gain God’s blessings over the colony. Fast-forward over three centuries, and another collection of wonders is earning a “Guitar God” his due. This time, it’s Ottawa’s Darren Michael Boyd, of Local 384 (Brockville, ON), that is casting a spell over fans and critics alike.

Following the release of his 2019 debut album, Lifting The Curse, which earned the guitarist a Josie Music Award nomination, Boyd is back with his second album, Wonders of the Invisible World. Recorded and produced by Boyd during the COVID quarantine, the 10-track album of guitar instrumentals looks to pick up where Boyd’s debut left off.

“My objective has always been the same,” says Boyd. “Play loud, be seen, and be heard … and proceed to tear the world a new one!”