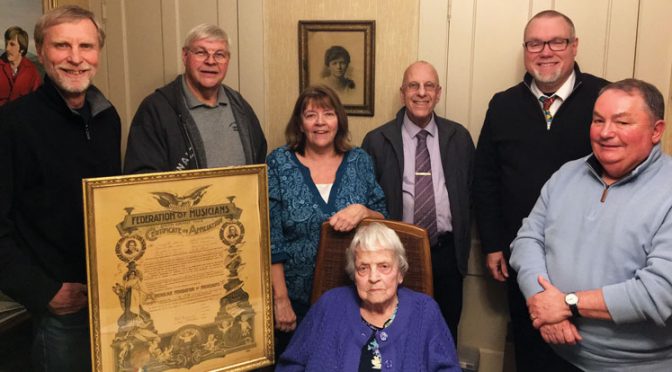 Local 374 (Concord, NH) celebrated its 115th year of service at its monthly meeting on May 2, during which the executive board also showcased the original “Certificate of Affiliation” that was drawn up on April 22, 1904.

The certificate states in part, “The American Federation of Musicians doth grant this Certificate of Affiliation to (its members and officers) and to their successors legally qualified to constitute the Musicians Association herein named and known under the title of, Musicians Protective Union Local 374 AF of M of Concord, NH.”

“It is amazing to think that after 115 years we, the ‘successors legally qualified’ are still performing the duties of the union, in the spirit of our predecessors and serving the present-day members!” says Local 374 President George West.

It is also worth noting that in 1905 the Second Regiment New Hampshire National Guard Band performed in Portsmouth, New Hampshire, at the signing of the Russo-Japanese Peace Treaty.

“We wonder if the signers of the AFM Certificate of Affiliation were still members of the Second Regiment Band and played for the Peace Treaty?” Lincoln says. “We think they’d be pleased that we have learned of their musical contributions and how they safeguarded area musicians by initiating Local 374.”