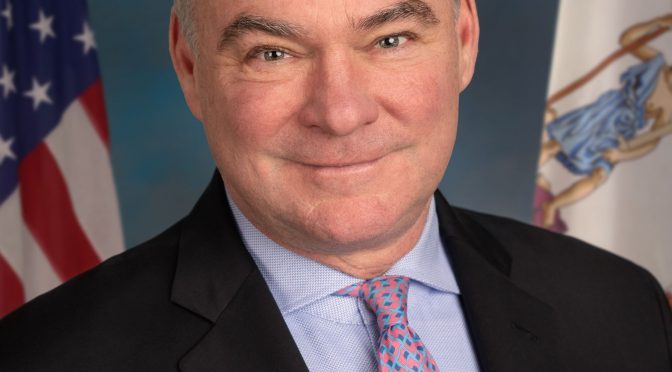 Kaine lives in Richmond, and travels the state when the Senate is in recess. According to Tom Reel, vice president of Local 125, the special event had been in the works since 2018 when the Senator, who is famous for carrying harmonicas wherever he goes, joined a band to play on stage at a political rally.

With clearance from the Federation, Norfolk’s executive board made Kaine’s membership official with a proclamation and an award. The Senator was welcomed via Zoom by musicians, guest union representatives, and the Eastern Virginia Labor Federation.

A wide-ranging discussion ensued that included legislation in the American Rescue Plan that would bolster multiemployer pension plans. Reel says, “It was an edifying and inspiring hour with Senator Kaine—who has been a consistent champion for labor and for the arts.”

The American Rescue Relief Act (signed into law in March) included a law that will forestall insolvency of multiemployer pension plans and restore benefits to millions of union members and retirees.

Kaine was an early supporter of the bill, which the labor movement has supported for years. Reel says, “If you’re lucky, you may get to hear him wail on his harmonica (self-taught from childhood), making friends and bridging divides with his music, and advocating for our art form and the working men and women who provide it.”