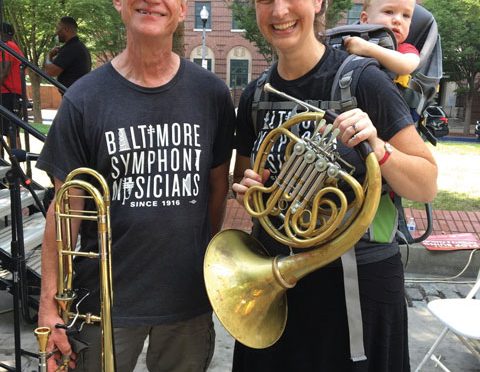 On Saturday, July 20, Baltimore Symphony Musician brass players, along with guest musicians, played “Which Side Are You On?” and “Solidarity Forever” at a labor rally in front of the Dome at Johns Hopkins Hospital in Baltimore, Maryland. Sponsored by the AFL-CIO, National Nurses United, and the Coalition for a Humane Hopkins, the event featured both national and local labor and political leaders who spoke in support of the organizing campaign for Hopkins nurses to gain union recognition and collective bargaining power.

Hopkins nurses have been fighting the hospital’s anti-union campaign for months. The nurses are organizing for respect, a voice at the table, and the ability to advocate for better patient care without fear of retribution. In addition, their campaign has focused on the egregious medical debt collection practices that Johns Hopkins Hospital continues despite widespread criticism.

In June, the hospital reached a settlement with the National Labor Relations Board to agree to stop violating federal labor law with such practices as unlawful surveillance and interrogation of RNs and barring off-duty RNs access to non-patient care areas to talk to their colleagues about the union. However, nurses report continued violations of their rights and an aggressive union-busting campaign designed to silence their voices.

“What was so amazing to witness at today’s rally was the bond our musicians have made with members of many other labor organizations in our community,” says Local 40-543 Secretary-Treasurer Mary Plaine. “It was heartening to recognize our new friends among the crowd. We are grateful for their support, and we will do what we can to help them with their struggles. That’s what this is all about, taking care of each other.”