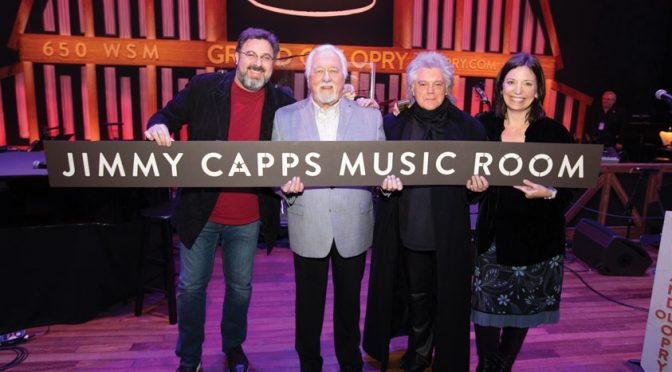 When you hear the four-bar acoustic guitar intro to the classic Kenny Rogers song “The Gambler”—one of the biggest songs in country music history—you are hearing the work of guitarist Jimmy Capps.

And when you hear the six string in songs such as “Stand By Your Man” by Tammy Wynette, “Elvira” by The Oak Ridge Boys, “He Stopped Loving Her Today” by George Jones, and “How Blue” by Reba McEntire, that, too, is Jimmy Capps.

Capps’ image may be low-key, but his prolific career has earned him a place as one of the most accomplished and respected guitarists in the history of country music. His recent autobiography, titled The Man in Back, details an illustrious career few can boast of, all from the back of the stage. That’s the way he prefers it—as the backbone of the band, making the front person sound great.

“I love that position; there’s not as much pressure as the man or woman up front. He or she sells the tickets, I’m there to support,” says Capps of Local 257 (Nashville, TN), a member of the Musicians Hall of Fame and the North Carolina Music Hall of Fame, a “Nashville Cat” in the Country Music Hall of Fame, and a member of the Grand Ole Opry band for the past 60 years. “From day one I wanted to be behind the artist. I feel more comfortable in that position, and it has allowed me to basically create on my own—unless the artist wanted one particular thing—but most of the time they let you create on your own and try to add something to the song.”

“What I love about Jimmy is that he is modest and humble, even though
he is a great musician,” says Local 257 President Dave Pomeroy. “He has outlasted so many great performers and players in his 60 years at the Opry, which will never be equaled.”

“All in all, the Opry’s been a foundation for income and for pleasure,” Capps says. “I get a lot of pleasure working with up-and-coming artists and with traditional artists.”

Capps started playing at age 12 when his parents bought him a Stella guitar. “The strings were an inch high off the fret board. It played hard. You could only play C and G chords,” Capps writes in his book. “The further up the neck you went, the more your fingers hurt. It was a cheap guitar, but I thought it was the greatest thing in the world.”

Capps practiced every day (and even slept holding his guitar) and played hoedowns with his uncle who played fiddle. By age 13, Capps got his first paying job on a radio show in his hometown of Benson, North Carolina. When he was 16, he became part of a television show called “Saturday Night Country Style.” By the time he was a junior in high school, he played gigs nearly every night. He loved music and hated school so much that he got his principal’s and his parents’ blessings to quit school.

“I’m amazed they let me quit school; I don’t know how I got away with that,” Capps says. “I wouldn’t recommend quitting school. It worked for me, but I wouldn’t recommend it. As a kid you think you can do anything. I knew what I wanted to do, and my parents backed me up. It was my dream to do the Opry.”

Just a few years later, at age 19 and while playing as a member of the Louvin Brothers’ band, Capps had his dream come true. “To this day I can still remember what it sounded like when I walked into the Ryman [Auditorium],” he writes. “This was where any country guitar player dreamed of being.”

That was in 1958. Capps played the Opry from then on, with The Louvins and other artists, and became a regular member of the Opry staff band in the 1960s. But that has been only one facet of his long career.

On December 21, 2018, Capps celebrated his six-decade anniversary on the Opry stage at a special concert and was honored with the announcement that night that the Opry rehearsal room had been named in his honor: the Jimmy Capps Music Room. “I kind of look down at the floor so I don’t have to look at it,” he says with a laugh. “I appreciate it very much and especially the respect that goes with it.”

If you listen to music, there is a good chance you have heard Capps play guitar. He has worked with a cross-section of artists, from Chet Atkins to Garth Brooks to Loretta Lynn and Alan Jackson (both of Local 257). He’s backed Ray Charles, John Denver, and Andy Williams. In addition, he has played on dozens of No. 1 songs and records, on songs used in movies, and has worked as both a session and touring guitarist.

Capps also hit the 60-year mark in 2019 for a separate achievement: being a member of the AFM.

“I just thought it was an honor back then,” he says of his decision to join in 1959. “I thought it was an honor to be in the same union that my musical heroes were in: the Grady Martins, the Hank Garlands, the Buddy Harmons, and Harold Bradley, who later on became president of our local. I just felt I needed to respect and honor all those guys that cut the trail to Nashville. They knocked down all the brush and the bushes and we came in on paved roads … they had already fought for things that I was able to use and make my life better.”

Capps says things like the pension plan and union wage negotiations are important benefits of being a member, and he always recommends to younger musicians to join. “For what I need as a musician, I haven’t found anything better than the musician’s union,” he says. “I’m pro union, I really am, and always have been.”

Capps is active in his local and has served for more than two decades on both the Local 257 Executive Board and as chair of the Emergency Relief Committee. The Emergency Relief Fund helps members in financial need due to medical issues that prevent them from working. “It’s helped many musicians through the years,” he says. “It helps give them some relief. It’s really been a good thing and I am so proud to be a part of it.”

In addition to union membership, his advice to young musicians is to have a good attitude about the work. “Attitude is 75% of it,” he says. “Get along with your fellow pickers, and your peers will be the keys to the kingdom; they’ll recommend you to other people. I think that has helped me through the years as well: having a good attitude. You’re there for the artist, you’re there for the song, and you need to do your very best for those two items.”

After more than 60 years as a professional musician, Capps says he still gets up every morning eager to get to work. “It’s been that way all down through the career I’ve had. Every day is different, and that’s just it: You get up wanting to do what you love. And not everyone is blessed with being able to do a job that they love. But I have been.”

To learn more about Jimmy Capps, visit his website at www.jimmycapps.com. To hear Capps play live, head on down to the Opry.

An Excerpt from The Man in Back

My finances got a boost [while working for the Louvin Brothers in 1959] thanks to the local musician’s union. I was not a member of the union, but I got checks from the union for each of my Opry appearances for three or four months.

George Cooper was the president of 257 local union. I was backstage at the Opry when Mr. Cooper walked up to me and said, “Son, I need to talk to you.”

He said, “I’ve noticed you picking up checks at the union. But I checked you out and you are not a member. Why is that?”

“You be in my office Monday morning,” Mr. Cooper said. “You’re going to become a member.”

That Monday, I explained to him, “I pay my work dues when I come in to pick up my checks. But the Louvins are just not working enough. And I can’t afford to pay the up-front fee and the annual dues.”

Mr. Cooper asked me, “How much can you afford to pay each week?”

He said, “Then here is your card. You bring me five dollars every week.”

Mr. Cooper was so kind to me. He understood people not working a lot. But he would work with you. I have now been a member of the musician’s union since 1959. I have been on the executive board for many, many years. I am a living testimony that the union is a good thing.”

—from The Man in Back