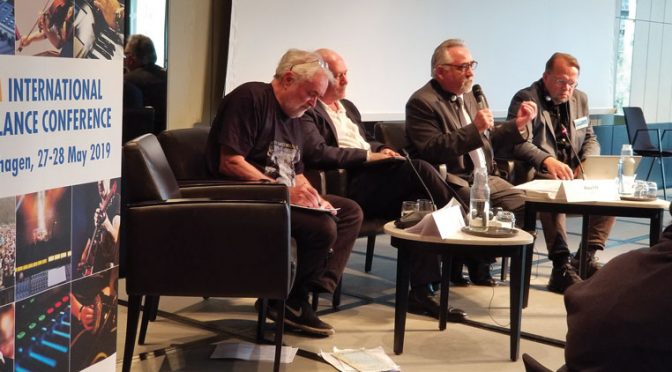 At the end of May, the International Federation of Musicians (FIM), a membership organization that includes musician unions from around the world, hosted their first-ever International Freelance Conference. Union representatives in attendance included delegates from Japan, Australia, Israel, the UK, most European nations, India, Senegal, Zimbabwe, Brazil, Argentina, and, of course, the US and Canada. President Hair, who was buried with AFM Convention preparations, assigned me to accompany Vice President from Canada Alan Willaert to represent the AFM at the conference.

The purpose of the conference was to study the experiences of freelance musicians from around the world, to share “best practices,” and to work to find practical ways to forge a path through the challenging environment of the gig economy and securing a more stable workplace. To quote John Smith, FIM president: “We belong to the original gig economy; a term that I believe has been appropriated in order to describe the sector of the modern workforce engaged in precarious, unreliable ways of earning a living. While many musicians have enjoyed successful freelance careers and prefer this type of ‘portfolio’ work to regular work in a band or orchestra, others find the freelance environment unpredictable and inconsistent and require their unions to put in place safeguards for them.”

One of the interesting descriptives for what should/could be a goal to focus on was what was called “flexsecurity.” In other words, is there a way to maintain the flexibility of the freelance world, but with the underpinning of a safety net of some sort, i.e., security? The country that may come closest to having a form of this currently in place is France.

There were numerous panels and presenters over the two-day conference. I was part of a panel on “Organizing Freelance Musicians.” It was moderated by Anders Laursen, president of the Danish Musician Union, and included Australian representative Paul Davies and Finnish representative Ahti Vänttinen. I talked about our Fair Trade Music program, its successes and challenges, which, amazingly, is not dissimilar to a program that Davies described. After we were finished, he shared his gratification in learning that they were not alone with this “wild plan” they had created to embrace their challenges, as it bore some resemblance to our Fair Trade Music.

Alan was tapped to sit in—very last minute due to the unavailability of the delegate from Ghana—on a panel focused on “Developing specific trade union services for freelance musicians.” Over lunch, he was able to pull together a long list of services available in both the US and Canada. While the AFM continues to focus and build on the organizing model of unionism, it was clear that in many parts of the world there is still a focus on unions as a “service organization.”

Other issues covered in panels included:

•  Use of digital technologies for career development.

•  Competition rules and access to basic labor rights including collective bargaining (when referring to “competition” in this context, in other parts of the world, it’s about antitrust or monopoly issues).

The multiple speakers’ presentations covered many of the legal components of our industry, sector policies, trade union policies, and, what was of particular interest to me, the distinctions between independent contractor versus employee worldwide. There are many names for an independent contractor, and very descriptive ones at that. Rental workers, entrepreneurs, casual workers, informal workers (from Brazil, where the street is their main stage), dependent contractors, platform workers, hybrid, sole trader, and, my two favorites, a-typical workers and precarious workers. All those names speak to the insecurity of this type of work.

So, what was my take away from the conference? First, as bad as we think we have it, there are certainly other nations that have big issues. For instance, in the African nations that I spoke with, musicians are legally not considered “workers,” so if they sign a contract with a promoter, and the promoter breaks that contract, there is no recourse because of their lack of legal status. In Argentina, there was musician liability for a fire that broke out at a venue, and while all the details are not completely clear to me, they are now spending up to six years in prison. On the positive side, I have great appreciation for the union in Iceland, which serves as the music school as well, so musicians are connected to the union from the first day of lessons through their professional careers. I also appreciated the conversations around the creation of an international agreement for musician scales from around the world.

At the end of the conference, the 100 musicians and union delegates from 30 countries agreed on a “Final Declaration.” With annual revenues of $3.25 trillion, the cultural and creative industries account for 3% of global GDP and employ 30 million people—about 1% of the world’s active population. We are not an insignificant part of the world work force, and the final message of the declaration states: “Governments and employers of musicians should recognize the contribution of these workers to the economy and to society as a whole, including in terms of cultural diversity. They should make sure that competition law does not apply to freelance musicians and that the latter are never forced to declare themselves as small businesses or enterprises and are free to form unions and to bargain collectively.”