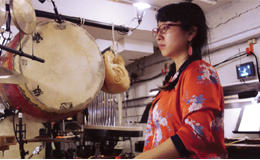 As an Asian woman, freelance percussionist Chihiro Shibayama of Local 802 (New York City) feels a certain sense of responsibility working in a male-dominated field. “I am definitely aware of my status,” says Shibayama, citing a recent statistic of how few female drummers hold Broadway chairs in theater pits.

“To be fair,” she adds, “that’s proportional. There were very few female percussionists when I was in school.” Shibayama believes young female musicians need to see “cool” female role models achieving success on predominantly male instruments. “I often get called to do interviews or provide content for that reason,” she says. Recent features include Local 802’s Allegro for women’s month in March 2020, where Shibayama was one of eight profiled female percussionists who work on Broadway.

It was a long and interesting road up to that point. When Shibayama, a native of Yokohama, Japan, first arrived in the US in 2001 to attend the Interlochen Arts Academy, she was 16 and didn’t speak a word of English. “My mother randomly found Interlochen because she had fallen in love with the Eastman Wind Ensemble when they toured Japan. She connected the dots and figured that if I went to Interlochen, I could find my way to Eastman and play in the wind ensemble.”

Interlochen presented multiple challenges, and not just culturally. “I had never played in an orchestra and didn’t even know how to hold cymbals in an orchestral setting,” she recalls. “Also, I had no idea what a peanut butter and jelly sandwich was. And I was suspicious of Jell-O.”

Shibayama says her survival came through the assistance of others. “I made friends, and they took care of me. My written English was useful thanks to Japanese English education. So I learned visually.” After graduating from Interlochen with a performance award in 2003, she earned both her Bachelor and Master of Music degrees—ultimately not from Eastman, but from The Juilliard School in 2007 and 2009. From there, Shibayama has built a multifaceted career ranging from Broadway pit work to orchestral percussion, with a big focus on contemporary music—and even an appearance as an extra on TV’s Mozart in the Jungle. She also maintains a busy side hustle as a freelance music librarian, which she began back in her Juilliard days. She is currently a librarian for Alarm Will Sound, the Orchestra of St. Luke’s, and The New York Pops.

The type of personality required to hop on a plane at 16 and travel by yourself to a strange country has served Shibayama well in her career—but she is quick to stress that she has not done it all on her own. “I always got help from someone,” she says. “Every gig, every great opportunity, came about because someone gave me a chance. It made it possible to keep going as a freelancer.” Now, she says, and especially in a pandemic, it’s important to pay that help forward. “The sense of community is so important.”

When the COVID-19 pandemic shut down New York’s theaters, Shibayama was subbing on West Side Story. “At first I struggled with no music,” she says. “I felt my self-worth was gone. Freelancers are always involved in chasing the next cool thing to do. But then I realized that just because there was no music, didn’t mean I wasn’t still a musician.” Shibayama got her first-ever day job, in customer service using her bilingual skills. “It was great experience, not least because I could pay my bills.” Of equal importance, the security afforded her more mind space to create. “I made some YouTube videos, teaching and playing, and collaborations with friends. I also taught myself how to record and edit videos using professional software like Adobe Premiere Pro.”

That job ended in November of last year, and Shibayama is still looking for another. But with extra time on her hands, she has kept on creating. “My biggest project is a weekly newsletter/blog called Positive Percussionist. It actually feeds into a larger process, since I had been wanting to transition more of my work online. Even in the best of times, just waiting for the next gig is not a reliable way to improve your situation or income.” The focus on her online presence has heightened the importance of teaching, another community-building activity. “Teaching also makes me a better player,” she adds.

Again, it all comes back to the importance of community, which is the underlying drive in Shibayama’s belief in a strong union presence. She joined the AFM in 2010 with her first big union gig, playing for the Radio City Music Spectacular. “After graduation from Juilliard in 2009, I had a tough year trying to sort out visas, a constant problem until you get a green card.” She had been collecting programs to build a case, while trying to save up money for immigration lawyers. “The Radio City gig allowed me to earn a real salary, and my working conditions were protected.”

This first union experience led to deeper involvement when Shibayama took part in actual unionizing activity with DCINY (Distinguished Concerts International New York), a commercial organization that solicits choirs from around the country to perform in Carnegie Hall. “They hired high-level freelancers and put together an orchestra. I was one of the core members who put together their first union contract.” Through this, Shibayama says she learned that the union wasn’t just the people in the Local 802 office on 48th Street.

“The union is us, the musicians. When we want to change something, we have to do it, and the local will help us. And younger musicians need to know that when they join, they’re supporting the whole musical community.”