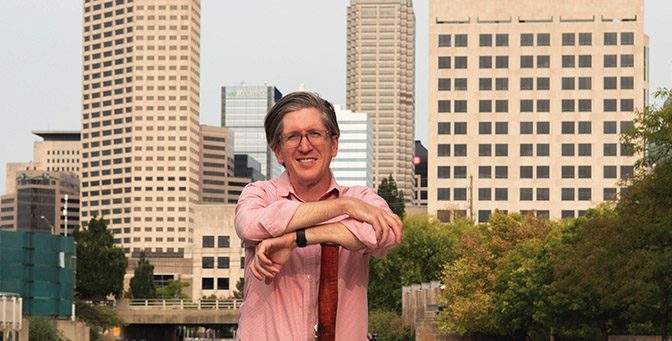 Mike Muszynski loves music. But he also loves to understand how things work. This double passion has guided his life, and is why he is a professional musician who also has an engineering degree and two music-related iPhone apps to his credit. This also goes to the heart of why he is not only a strong unionist, but an active AFM member who has served on orchestra committees and as a delegate to two Player Conferences—because participation leads to understanding and greater appreciation.

“When I was in high school and looking at colleges, one of my teachers was adamant that I have other skills to make a living on in case music did not work out,” says Muszynski, a member of Local 3 (Indianapolis, IN). “I decided pretty early on I wanted to play bassoon for a living, and my fallback would be engineering.” After receiving bachelor’s degrees in both music and engineering from Northwestern University and going on to receive a master’s in music from the same school, Muszynski moved to Georgia and began playing with the Atlanta Opera.

In 2015, he moved to Indianapolis and became Second Bassoon in the Indianapolis Symphony Orchestra (ISO). He also maintains the website for the ISO musicians.

When asked how he chose the bassoon as his instrument, Muszynski laughs. “We’ve been running this interview series on our ISOmusicians.org website and everybody who answers that question seems to fall into three categories: 1) I really wanted to play some instrument when I grew up, 2) Somebody gave it to me and I never thought I was ever going to play an instrument, or 3) I started on something else. I fall into the second and third categories,” he says. “I never would have picked up the bassoon if someone hadn’t handed to me. I had never heard of a bassoon before. I played piano when I was really young because my parents thought it would be a good thing for me learn an instrument. I didn’t like it at all.”

When Muszynski got to middle school, still wanting to play a musical instrument (just not piano), the band director encouraged him to try the bassoon, which the director admitted was difficult, not a well-known instrument, and something nobody really wanted to play. Muszynski brought it home and fell in love. “It just fit my personality,” he says. “I took to it immediately.” Even his dad knew it was a perfect match, because within the first week of playing, his dad said, “This kid is going to be a professional musician someday!”

To Muszynski, the bassoon is an instrument that is “used more than it’s appreciated;” most people don’t recognize its sound, or even know what it is when they see one. But it is an instrument with a long history in Western music that plays a wide range of roles in an orchestra. In the Baroque period, it was used as a bass instrument. Then it became an ensemble instrument and started developing a more soloist role by the Classical period. “It’s really versatile, it has a huge range, and it’s got a really nice mellow characteristic to it that can do a lot of things,” he says. For example, the instrument’s plaintive quality makes it ideal for use in emotional moments, while its sometimes-silly sound is often used for clowning moments—whether it’s for orchestra, opera, theater, movies, or television. Probably the most famous bassoon part ever occurs in the song “The Sorcerer’s Apprentice,” which was used in the 1940 Disney film Fantasia. Another classic example of the instrument is the bassoon solo at the beginning of Igor Stravinsky’s ballet, The Rite of Spring.

“I’m sure a lot of people have heard a lot of bassoon music in movies and they just have no idea; they don’t even notice. But I notice,” he says with a laugh. “I notice every single time.”

Muszynski’s mind is not just musical, but also mechanical, and he likes it when he can blend his two interests. This was the case when he wrote the two iPhone and iPad music education apps he created, Bassoon Fingerings and Clef Cards—the former allows for easy retrieval of standard bassoon fingerings, while the latter offers flash cards to help learn to read music.

“Probably my top hobby at this point is coding stuff,” he says, and not just because of the current pandemic. Actually, what he has been spending most of his time on during quarantine has been more in computers, running the ISO musicians website and social media, and editing videos of the musicians performing remotely. “It was one of the first things I asked to do when I got here,” Muszynski says of his webmaster duties. “After a couple of years, it seemed we needed more of a presence online, so we ramped up our website and social media channels.”

In the time of COVID, this has become even more important. The ISO Musicians now have a team to manage their digital presence, and they have been keeping their connection to their community strong despite the pandemic and the furloughs imposed on the musicians by the symphony back in early April.

“It’s a way to give a stronger voice to the musicians and to tell our stories directly,” he says. “I think it has strengthened that community bond that we have, and it makes us into more relatable members of the community, rather than just musicians. We show people what makes us tick, what we do when we’re on stage and when we’re not on stage—it’s an opportunity to provide some color about what we do when we are not musicians, or why we are musicians, and those kinds of questions.”

The ISO musicians’ website and social media channels achieve this community outreach and information through interviews with its members—called “Musician Spotlights”—publication of a regular newsletter, and a video series. The video series has become especially handy since the orchestra’s performances were all canceled in March and the musicians put on unpaid furlough in April. The ISO musicians have been recording their individual parts independently, then sending the recordings to Muszynski, who layers them all together and creates the final cut. These performances have been posted to the ISO musicians’ website, as well as their YouTube, Facebook, and Instagram pages.

“This is helpful in a situation like when we were furloughed because it gives us an outlet to put together music and stay connected to each other and to our community,” Muszynski says. “We are still part of Indianapolis and we want to come back and make great music in a world-class orchestra for the city and putting these projects together and having this platform has helped strengthen the bonds the musicians have with each other as well as with our community.” He says orchestra musicians, like all musicians, have been playing where and when they safely can, such as on patios and in courtyards, just to keep the music resonating and the community ears assuaged.

“There’s definitely a hunger for this kind of culture, and I think it’s painful for the city not to have it at the moment,” Muszynski says.

In mid-September, the Musicians of the ISO reached a one-year contract agreement with the symphony, within which a modest weekly stipend will begin in January 2021, six weeks of performances or community engagement activities may be scheduled, and musicians’ healthcare coverage—which was canceled in June—will be reinstituted.

Muszynski is a member of the orchestra committee and participated in the work that culminated in the new contract. In fact, he is a longtime active union member. He served on the orchestra committee in Atlanta, where he helped negotiate three contracts for the opera, and he has served as a delegate to both the Regional Orchestra Players Association (ROPA) and the International Conference of Symphony and Opera Musicians (ICSOM).

“I joined the union when I first started playing in the opera orchestra in 2008. I met some people there who discussed it with me and explained the benefits of being in a collective like this. It was a pretty easy decision [to join],” he says. “To me there is a lot of value in that; I think we derive better results as members of a collective than we would as individuals.”

Muszynski found it “eye opening and fascinating” when he served as a ROPA delegate during his time in Atlanta. At his first conference, with delegates from nearly 100 member orchestras all meeting in groups, he loved the collective action: meeting people, discussing workplace issues and challenges, finding creative solutions. “By the time I got to Indianapolis, I basically asked if I could be an ICSOM delegate because I enjoyed my time in ROPA so much,” he says. He finds being a delegate to a Player Conference to be like a gateway to committee work, and it’s a path he recommends to others if they are interested in working to improve their workplace.

In the end, Muszynski believes that music is powerful, and its place in the community as live entertainment will eventually make a dramatic rebound from the pandemic. “I mean, we’re all social creatures, right? I think people are really starving for some sort of social activities where they can gather together,” he says. “I think we’re going to come out of this stronger than we were before because it’s going to give us a chance to look at what we do, what’s important to us, why music is important to us, and why it needs to continue.”

In Mike Muszynski’s bag (which is a Koelbl lightweight backpack case):