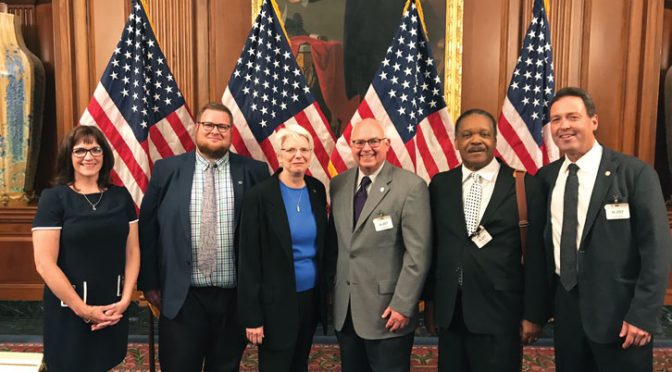 After markup in both the House Education, Labor and Pensions Committee and the Ways and Means Committee, HR 397, the Rehabilitation for Multiemployer Pensions Act of 2019, often referred to as the Butch Lewis Act, was taken up on the floor of the US House of Representatives and overwhelmingly passed by a vote of 264 to 169, with 29 Republicans joining Democrats to advance the bill out of the House chamber.

Speaker Nancy Pelosi, recognizing the vital importance of this legislation to millions of union workers, opened up her section of the House Gallery so that organized labor could be on hand during that historic moment to watch passage of this critical bill. AFM Secretary-Treasurer Jay Blumenthal and I were joined by Local 161-710 President and newly elected IEB Member Ed Malaga, Local Secretary-Treasurer Marta Bradley, Local Board Member Doug Rosenthal, as well as Baltimore Local 40-543 Secretary-Treasurer Mary Plaine to participate in a “morning coffee” celebration with members of Congress, a pre-vote reception in the US Capitol Building, and the House Gallery for the floor vote. We were joined by members of the Teamsters, Bakery and Confectioners Workers, United Mine Workers, International Brotherhood of Electrical Workers (IEBW), and a host of other brothers and sisters who traveled to Washington to be a part of this historic event.

Of note during the Ways and Means Committee markup was an amendment that would mandate changes in both pension fund trustees and financial advisors should a union apply for a 30-year treasury loan. This amendment was similar to Resolution 8 that was offered during the AFM Convention, mandating that one investment expert and one actuarial expert be appointed to the Pension Fund Board of Trustees, which was defeated by convention delegates.

Another highlight of both the Ways and Means Committee markup and the House floor vote came about when Representative Judy Chu (D-CA) gave testimony about how important this legislation is to her constituents. On both occasions, Rep. Chu pointed out her firsthand discussions with both Gary Lasley, Secretary-Treasurer of Local 47 (Los Angeles, CA), and with Marc Sazer, president of AFM Recording Musicians Association (RMA). During both congressional committee meetings, Rep. Chu talked about the importance of fixing the pension problem for members of the “American Federation of Musicians and Employers’ Pension Fund” as well as for actors “and so many more creative professionals” in her district.

The congresswoman’s comments, along with those of Senator Sherrod Brown (D-OH) and other members of Congress, are an illustration of how intensive lobbying on the part of AFM-EP Fund Co-Chairs Ray Hair and Chris Brockmeyer, along with their respective lobbying teams, made an impact on members of both the Joint Select Committee and the Congress. AFM figured prominently in the Joint Select Committee final report, in both the Education, Labor and Pensions Committee and Ways and Means Committee reports, as well as in the July 24 Congressional Record of the 116th Congress (pages H7331 and H7332).

At this point, it is vitally important for me to note the outstanding teamwork and collaborative contribution of Local 161-710 (Washington, DC) President Edgardo Malaga, Secretary-Treasurer Marta Bradley, Vice President Patty Hurd, and board member Doug Rosenthal, in addition to Baltimore Local 40-543 Secretary-Treasurer Mary Plaine for their committed efforts in motivating Washington DC and Baltimore musicians to participate in this important day of Federation advocacy.

On July 25, HR 397 passed out of the House and was received in the Senate for consideration. Plans are now in motion to make senators aware of the importance of passing this legislation. AFM members are encouraged to write letters of thanks to the 235 House Democrats and 29 House Republicans who voted favorably for HR 397’s passage (www.congress.gov/members). The official vote count can be found online at http://clerk.house.gov/evs/2019/roll505.xml.

You are also encouraged to write your Democratic and Republican senators and encourage them to vote in favor of passage of the bill in its current form. Find your senator here online: www.senate.gov/general/contact_information/senators_cfm.cfm.

With critical work completed in the US House of Representatives, President Hair and the AFM Legislative Office now join forces with AFL-CIO President Richard Trumka, the AFL-CIO Executive Board, and the rest of the labor movement affected by multiemployer plan legislation to drill down on our collective strategy relating to Senate passage of the Butch Lewis Act. The President’s Working Group on Retirement Security met in August to lay the groundwork on Senate messaging and key targets in the Capitol. Previous House messaging was reviewed in an effort to identify the more relevant and salient points that would be required to more effectively move our Senate messaging.

I attended the meeting in Washington led by IBEW International Secretary Treasurer Kenneth Cooper and AFL-CIO Secretary-Treasurer Liz Shuler at the AFL building on behalf of President Hair who was at that point chairing AFM-EPF meetings in New York. The Working Group will meet regularly throughout the Senate legislative process, covering not only strategy and communications but will also act as an early warning system when a mass effort is imminent or required. Here is where we will be asking for local efforts to contact your elected senators to help drive home the importance of passage. We will be asking for special help from our TEMPO Signature Members. 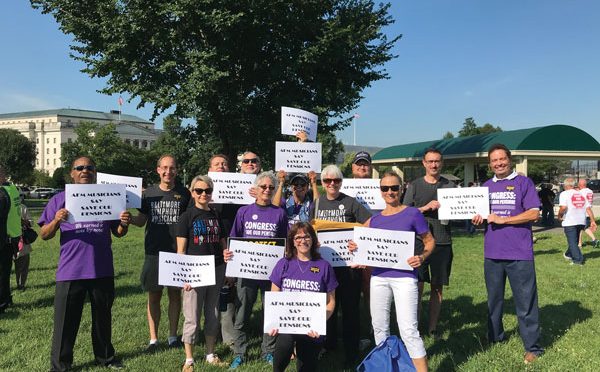 After the House Education and Labor Committee marked up and passed HR 397 on June 11, the House Committee on Ways and Means took the bill up on Wednesday July 10. By a vote of 25-17, Chairman Richard Neal (D-MA) and members of the House Ways and Means Committee ushered the Butch Lewis Act out of committee along party lines past all opposition, sending it to the House floor.

Before the July 10 committee mark-up, a labor rally was held on the east side of the Capitol building led by Neal. The AFM worked with Local 161-710 (Washington, DC) President and newly elected IEB Member Ed Malaga, Secretary-Treasurer Marta Bradley, and board member Douglas Rosenthal, as well as with Local 40-543 (Baltimore, MD) Secretary-Treasurer Mary Plaine, to field a group of local AFM members and Executive Board officers to attend both the rally and the mark-up at the behest of AFM President Ray Hair. Members of Local 802 (New York City) were also in attendance as well as Local 257 (Nashville, TN) President and IEB Member Dave Pomeroy, who also made a visit to Senator Lamar Alexander’s (R-TN) office.

“They earned their benefits” became the rallying call to members of the committee from Representative William James Pascrell (D-NJ), debunking the opposition’s theory that the failure of more than 120 multi-employer pension plans rests solely with alleged trustee mismanagement. Democrats in turn made it clear that because there was not enough punishment of Wall Street bankers who torpedoed the economy in 2008, serving no jail time, the rest of corporate America felt comfortable to continue fleecing the American people without redress.

Representative John Lewis (D-GA) noted that Congress has a moral obligation to fix this problem, bearing in mind that it was corporate America’s desire, evidenced by the 2008 market dilemma, to continue to boost their own corporate profits and multi-million-dollar salaries.

During the five-hour mark-up for HR 397, Congresswoman Judy Chu (D-CA), a member of the committee and co-chair of the House Creative Rights Caucus, noted that the failure of these plans was not the fault of pensioners and plan participants. She shared stories of her constituent Gary Lasley, Secretary-Treasurer of AFM Local 47, supported by testimony from AFM RMA President Marc Sazer, also a member of AFM Local 47. Chu talked about how a failure by Congress to support all working men and women, particularly those in the film and Broadway sectors, during this crisis will leave Sazer, Lasley, and their AFM colleagues unable to take advantage of years of pension contributions/retirement security that they earned and so well deserve. Through her comments and commitment to our great union, Representative Chu distinguished herself as a true champion of all professional musicians.

The full House of Representatives is expected to take the Butch Lewis Act up for a final floor vote in the near future. As of this writing, an exact date has not been set. AFM members have been asked by AFM-EPF Trustees and by President Hair to contact their representatives in the coming weeks and encourage them to co-sponsor HR 397, the Butch Lewis Act, and vote for its passage.

As of this writing, a Senate companion bill has not been introduced.