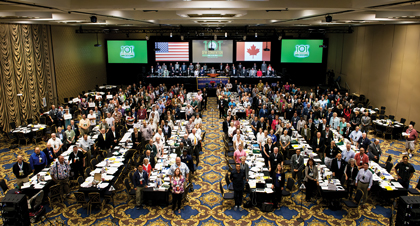 As 2019 draws to a close, it is only natural and fitting that we look back at what has occurred this year and see what the Federation has accomplished and how far the union has come. It was a busy year full of change and continued resolution, full of challenges and accomplishments, all based on a foundation of solidarity.

Below are the highlights of the year, listed chronologically.

On March 10, the Chicago Symphony Orchestra went on strike after management sought to dramatically cut personnel, performances, and pay. Lasting seven weeks, the strike was the longest in the orchestra’s history.

The major sticking point was a proposed change to retirement benefits, moving musicians from a defined-benefit pension plan, which guarantees a set amount in retirement, to a defined-contribution plan. Chicago Mayor Rahm Emanuel ultimately stepped in to assist with negotiations, bringing both sides of the negotiating table to his office for a meeting. The strike was resolved two days later.

Just after Memorial Day this year, the Baltimore Symphony Orchestra announced that it would cancel its summer season and stop paying its musicians as of June 16. The musicians, who had been playing without a contract since September, were informed only hours before the news went public that they were locked out. For the next 14 weeks, BSO musicians picketed in front of the Meyerhoff Symphony Hall while negotiations between musicians and orchestra management continued.

Although the employer “lifted” its lockout on the evening of September 9, the musicians refused to return to work without a contract in place. The union filed an unfair labor practice charge with the National Labor Relations Board on September 10, charging the BSO failed to bargain in good faith by unlawfully locking out the musicians to unilaterally implement its 40 work-week proposal without reaching an impasse.

A tentative one-year agreement was finally reached between management and union on September 20, allowing the Baltimore Symphony to open its concert season on September 27.

Just prior to the 101st convention of the AFM in June, the International Executive Board approved the charter of new Local 423 in Boise, ID. This move followed the success of the Boise Philharmonic Orchestra musicians joining together to become, and be recognized by their employer as, an AFM orchestra. Musicians had worked for decades under a “master agreement” with the orchestra management, but in recent years felt they had no real voice or dignity in their workplace.

Starting in October 2018, BPO musicians began to investigate what it would take to unionize. After six months of intensive training, organizing, and legwork on the part of the BPO Organizing Committee—assisted by organizers from the AFM—the musicians were recognized as part of
the AFM by orchestra management, and began negotiating a new collective bargaining agreement.

“It’s a great model to follow,” says Michael Manley, director of the AFM Organizing and Education Division, who assisted the Boise musicians. “They really created a movement in Boise.”

In June, President Ray Hair announced an IEB-supported, Federation-wide, member-driven campaign to win industry-standard wages, residual payments, and benefits for musicians who perform and record TV and film content made for streaming platforms. The #BandTogether campaign also seeks to establish meaningful new revenue from film and TV streaming that would boost contributions toward the union pension fund.

Television networks and film studios agreed this year to make residual payments and increased pension and health contributions to actors, writers, and directors when content is made for streaming, but have refused to do so for musicians. As Hair has said, “It is unconscionable that these wealthy global companies have decided that some digital content creators deserve compensation that reflects the value of their work, but that musicians don’t.”

Musicians have been holding rallies, protesting, and playing live music across the country calling on film and TV producers to negotiate a fair contract that includes streaming residuals.

101st Convention and Election of Officers

The AFM 101st Convention took place from June 16-20 at the Westgate Hotel in Las Vegas, Nevada, with 235 delegates from 145 locals attending. A wide range of guest speakers from the US and Canada discussed issues ranging from organizing to contracts to property rights and more. A total of 12 recommendations and 14 resolutions were considered by the delegates, with 22 changes approved to the bylaws and seven resolutions adopted.

Ed Malaga, Local 161-710 (Washington, DC) President, was elected to the IEB at the June convention. He has been president of his local for the past nine years and been an AFM member for 30 years.

Tino Gagliardi, Local 802 (New York City) was reelected to the IEB at the June convention, but resigned his seat in September to accept an appointment from President Ray Hair as director of the Federation’s Theatre, Touring, and Booking Division and also as International Representative assisting locals located in the Eastern United States.

Terryl Jares, president of the Chicago Federation of Musicians, Local 10-208 (Chicago, IL), was appointed by the IEB in September to fill the unexpired term of Gagliardi. Jares has served Local 10-208 continuously since 1995, first as a member of the local’s board of directors, then as the first woman to be elected vice president in 2004, and also as the first woman to be elected president of Local 10-208, a position held since 2016. She has served as an AFM convention delegate since 2003, most recently in 2019 as a member of the convention Finance Committee.

Earlier this year, the AFM moved its headquarters offices in New York City from the sixth floor to the ninth floor at 1501 Broadway—also known as the Paramount Building because it served as the New York headquarters for Paramount Pictures. The new office, which had to be completely remodeled and redesigned before occupancy, consists of 18,332 rentable square feet.

The AFM signed a lease for the space lasting 15 years and 10 months, although the union has the option to leave after 10 years if the real estate market presents a great purchase opportunity.

On July 24, the US House of Representatives passed the Rehabilitation for Multiemployer Pensions Act, also known as the Butch Lewis Act. The bill establishes the Pension Rehabilitation Administration within the Department of the Treasury, authorized to issue bonds in order to finance loans to “critical and declining” status multiemployer pension plans, plans that have suspended benefits, and some recently insolvent plans currently receiving financial assistance from the Pension Benefit Guaranty Corporation. The legislation will provide relief to more than 1.5 million workers, pensioners, and retirees who depend on their multiemployer pension plans.

As of press time, the full Senate had yet to take up the legislation.

In May, American Airlines made changes to its policies by eliminating oversize bag fees for common music equipment. As of May 21, customers were allowed to check common oversize music equipment as standard baggage, up to the maximum allowed dimensions and within the weight requirements, without an additional oversize charge.

In late August, a consortium of nearly 200 organizations agreed to ease restrictions on the buying, selling, or transportation of musical instruments made from endangered species’ materials across international borders. The new rules related to items containing rosewood, cedrela, and mammoth ivory, and improvements to the Musical Instrument Certificate in use by touring orchestras, and are expected to improve the mobility of performing artists, redirect enforcement resources to support conservation, and facilitate international cultural activity.